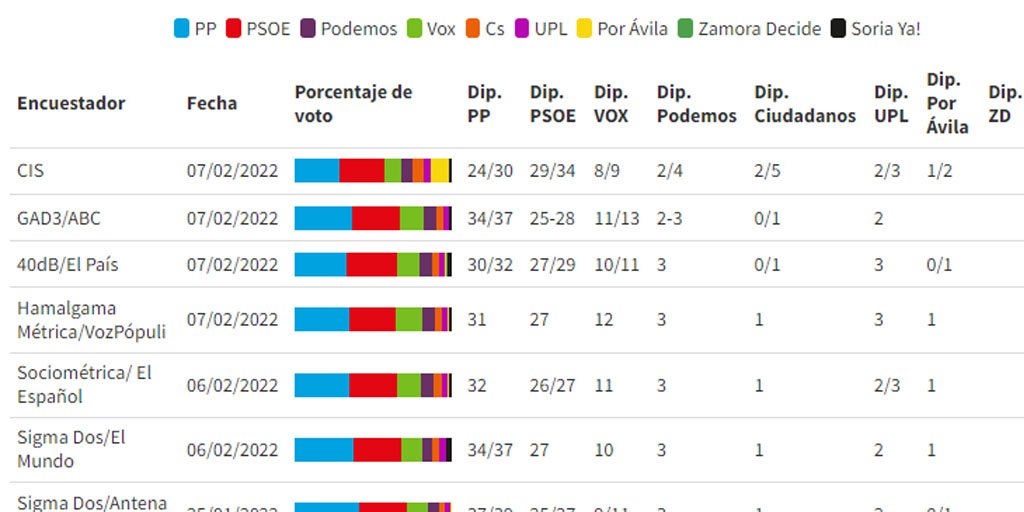 The CIS, the only poll that gives victory to the PSOE in the elections of Castilla y León

It has done it again, the Tezanos CIS stands out from the rest of the electoral polls to place the PSOE as the first political force in Castilla y León. The poll gives the party of Luis Tudanca the highest percentage of votes in all the polls carried out in the last two weeks, 30.1%, which would translate into a representation of between 29 and 34 deputies, in a Parliament where the absolute majority stands at 41 out of a total of 81. Thus, the PSOE could govern with the support of United We Can and local parties.

However, this very promising scenario for the PSOE is only recorded in this ‘flash’ barometer published today,

just the last day that polls can be published.

The rest of the polls published in media such as El País, El Mundo, El Confidencial or ABC itself, as can be seen in the table above, draw a very different scenario: next February 13 the PP could relaunch itself as the most voted list, obtaining between 30.8% of the votes (40db/El País) and 39.2% (SigmaDos/Antena 3), which would translate between 30 and 39 attorneys .

However, it should be noted that since the end of December the popular, Alfonso Fernandez Manueco, dissolved the Cortes and called new elections, the picture has become increasingly complicated for the candidate. While at that time the polls placed him on the verge of an absolute majorityIn just over a month, that advantage has been shrinking.

Even so, all the investigations, with the exception of that of the CIS, place the balance on the right side, yes, the PP would depend on Vox to govern.

In fact, the polls are favorable to the party of Abascal and Juan García-Gallardo with estimates that mark a clear growth with respect to the regional elections of May 2019. Once again, the CIS is once again the one that gives the formation the lowest percentage of intention to vote (11%) compared to 15.1 % of Gad3 for ABC or 15.9% of Metric Hamalgama for VozPópuli.

For its part, most polls predict a difficult future for Ciudadanos, the match of Ines Arrimadas and Francisco Igea, which could go blank next Sunday. The CIS is the only one that distances itself from this trend and insists on reviving the orange party, collecting 7.6% of voting intentions.

Talking about We can, the Tezanos survey hardly establishes differences with respect to those published by other media, giving the formation 7.2% of the vote.

Likewise, the CIS shows a strong irruption of local parties, which could add up to 8 regional deputies, which would mean that they would be key in any government pact. In fact, it is the only poll to give Union of the Leonese People an estimated vote above 4%, with a 4.6% of the votes, which would translate between two and three seats.