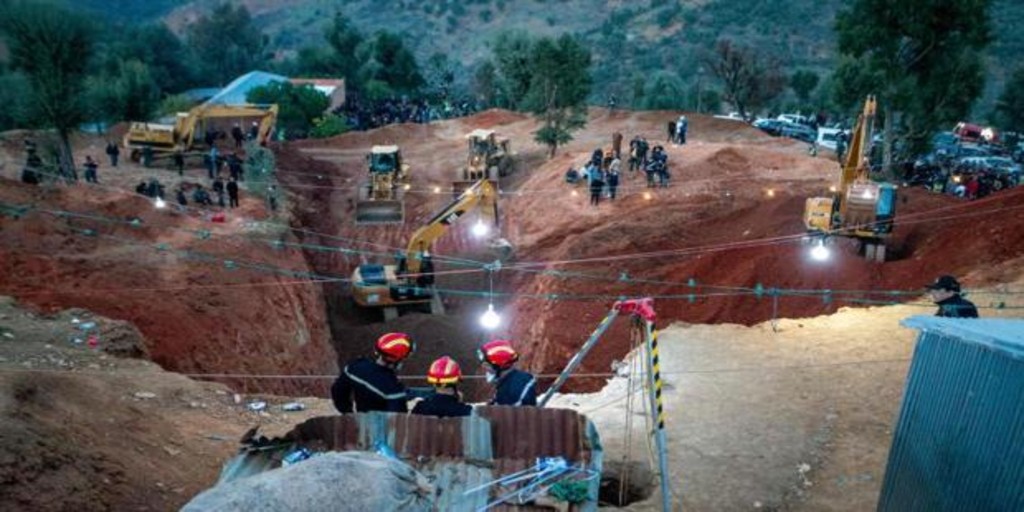 The rescuers, three meters from the child trapped in a well in Morocco: “We are almost there”

The rescue teams continue to try this Friday for the fourth consecutive day to get a five-year-old boy who fell into a well in a town in northern Morocco, an operation that has the country on edge.

The boy accidentally fell into a dry, narrow and hard-to-reach well dug near the family home in Ighrane village on Tuesday afternoon. Rescuers brought oxygen and water to the bottom of the narrow shaft, suggesting that Rayan is still alive, according to local media.

The bustle of machines deployed to clear the ground around the 32-meter-deep well was still at the scene of the tragedy, a village near the town of Bab Berred, in the province of Chefchaouen (north), confirmed the AFP.

According to local authorities, rescue teams are carrying out the latest vertical drilling works to get to the bottom of the well. At the same time, they are stabilizing the surrounding ground so they can excavate a three meter horizontal tunnel to get the child out, avoiding endangering the lifeguards.

These complex operations are carried out under the supervision of engineers, surveyors and civil protection teams. But this phase of the rescue is delicate due to the risk of landslides due to the nature of the soil, since some layers are sandy and others rocky.

«We are almost there. We have been working hard for three days. We are getting tired, but all the rescue teams are holding on despite the unforeseen circumstances,” said Abdesalam Makoudi, site manager.

The family has hope

“Rayan was playing and then he disappeared around 2:00 p.m. The whole family mobilized to look for him until we realized that he had fallen into the well,” the boy’s mother told the press, with tears in her eyes. “I still have hope that my son will be returned to me alive,” he said.

A medical team has been deployed at the scene of the accident to “perform the initial examinations and resuscitation interventions of the child once rescued,” the MAP press agency said. In addition, a medicalized helicopter was mobilized in case of emergency.

“Our hearts go out to the family and we pray to God that he will be reunited with his relatives as soon as possible,” Executive spokesman Mustapha Baitas said this week.

At first, the rescue teams tried to descend directly into the well, but this operation was abandoned because the diameter of the well does not exceed 45 centimeters.

They also thought of expanding the diameter of the well, but it was impossible due to the risk of detachment. The only solution was to dig around.

The tragedy has generated a lot of solidarity on social networks. On Friday, the live broadcasts of various Moroccan media they continued to attract hundreds of thousands of spectators, awaiting the fate of the child.

“Hold on little Rayan, please hold on,” one netizen implored on Twitter. The hashtag #salvemosarayan (in Arabic) was among the top Twitter trends in Morocco for the second consecutive day.

In addition, many inhabitants of the region went to the scene of the accident, which sometimes makes rescue efforts difficult. “We have come to help the rescuers. We have been there for three days. Rayan is a child from our region, we pray to God to save him,” said a volunteer. “We’re not leaving until it’s out of the well,” he said.

This accident recalls a tragedy that occurred in Spain in 2019 when a two-year-old boy died after falling into an abandoned well 24 centimeters in diameter and more than 100 meters deep in Andalusia. After a major operation, the remains of the minor were rescued after a deployment that lasted 13 days.