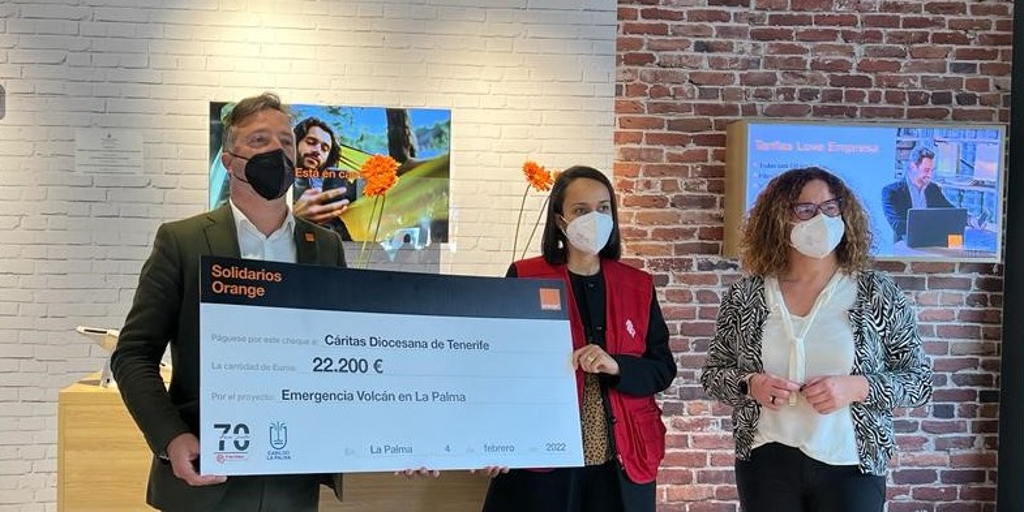 Orange employees raise 22,000 euros to help those affected by the La Palma volcano

The more than 5,500 Orange Spain employees managed to collect more than 22,000 euros of help for those affected by the La Palma volcano, an altruistic collection that today has reached the Isla Bonita. The delivery has been, after the proposal of the Canarian employees, to Cáritas Diocesana de Tenerife and will serve to help those affected by the eruption in La Palma.

The Orange store in Los Llanos de Aridane has been the setting for the delivery of these funds, which were collected through the sales in the markets organized during Solidarity Week, which Orange organizes each year at different venues throughout Spain.

The Director of Regulation, International Relations, External Communication, CSR and the Orange Foundation, Luz Usamentiaga, told ABC that “from the first moment there was a very important mobilization at the corporate level and by the employees» to help the families of La Palma, not only with measures from the company to guarantee connectivity on the island and facilitate connectivity for those who had to leave their homes, but also in a campaign fundraising by company staff.

This year and since October, the entire workforce, with more than 5,500 people mobilized for the cause, they turned to preparing for Solidarity Week and dedicating the proceeds to La Palma. They have been, he said, “markets of all kinds and with all kinds of products” that have operated in a dozen corporate buildings distributed throughout Spain and on the web platform of jumble sale virtual.

In the markets “everything has come, from merchandising products, obsolete devices, the sale of products from non-profit entities, handicrafts from employment generation centers, a bit of everything”, with things “from technology to The most basic”.

The objective is reach families, with direct contributions »as will be managed by Cáritas Diocesana.

However, it is not the only action that the company has carried out on the island, since after the eruption additional teams were sent to alleviate the damage to the fixed and mobile network and «ensure there are no service interruptions». In addition, Usamentiaga recounted, “a 35 gig free bonus for each male and female palm user”, to guarantee that regardless of their circumstance “it could be connected”. Another action was that of «suspend the collection of internet fees for homes, companies and palm businesses” with the aim of “alleviating the load” for La Palma customers.

Usamentiaga has underlined that «La Palma is in our head and heart», and they will be «close to their needs to respond quickly», through the technical team and stores they have on the island, which «will be our eyes for future actions».

A long way to go

The collection delivery event was also attended by the councilor of Social Action of the Cabildo La Palma, Nieves Hernández, the institutional representative of Orange in the islands, Jose B. García Fernández, who delivered the check to the operational coordinator of the Emergency in La Palma Diocesan Caritas from Tenerife, Melania Martin.

Cáritas Diocesana has already attended directly to 400 families and more than 1,100 people (including 250 minors) affected by the Cumbre Vieja volcano in La Palma.

The councilor of Social Action of the Cabildo de La Palma, Nieves Hernández, has shown her affection and gratitude for the contribution raised by Orange employees, as well as for their involvement with the people of La Palma in one of the most complicated moments in its history. «Despite all the circumstances that we have had to live through in recent months, we have not stopped feeling wrapped up and moved with the wave of solidarity that our island has received”, the counselor pointed out.

For her part, Melania Martín, operational coordinator of the Emergency in La Palma of Cáritas Diocesana de Tenerife, has indicated that this is “the first section of a path that is not expected to be easy», which today «does not have a clear goal to achieve, since there are many needs that arise in the day to day of families who, in one way or another, have been affected by the consequences of the volcano » but that «thanks to the initiatives that have been generated and the solidarity of the people who have trusted us to be the means of executing the response to this situation, we will be able to maintain ourselves as long as the emergency is alive».