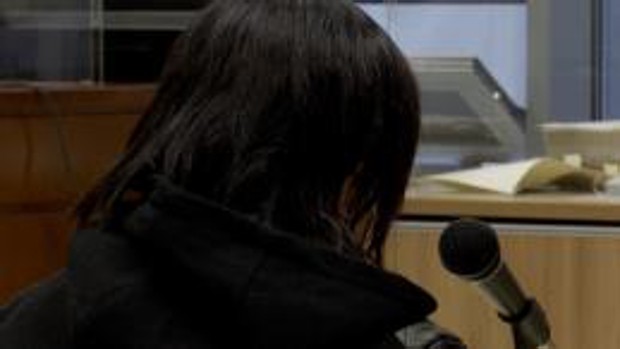 «I uncovered the girl and I noticed her gelatinous, with a strange color and between the dizziness she had, okay? I was going to throw myself out the window. It was the reaction I had.” With that detachment and in a monotone tone, Adriana Ugueto told the court yesterday how she discovered, according to her, that her five-year-old daughter Carolina was dead in the bed of the “Los Bracos” hotel in Logroño. That story clashes squarely with that of the Prosecutor’s Office, for whom Adriana and her mother Olga drugged the little girl with Noctamid, a benzodiazepine, and without any possibility of defending the creature, they pressed her mouth and nose until she stopped breathing (she had a pacifier in her mouth) and suffocated her..

The accused is asked for a reviewable permanent prison for the murder, planned, that occurred on January 26, 2020. Her mother, the girl’s grandmother, committed suicide in the Ebro river. She is responsible for the crime, she maintains her daughter, who yesterday He unhesitatingly charged him with the murder, insisting over and over again that “I would never make an attempt on my life or that of my daughter.”

The trial for this filicide – after which there is a five-year legal battle with the father of the minor for custody – began yesterday at the Audiencia de La Rioja with the woman’s statement. The Prosecutor’s Office maintains that the death of little Carolina was “a last possessive act, in revenge and resentment towards Javier. CM, the father, not tolerating the girl being with him». Both for the prosecutor and for the private and popular accusations, exercised by the Clara Campoamor association, Adriana and her mother, Olga, devised a plan to end the lives of both and also that of the girl and decided to execute it last weekend. week of January when it was his turn to be with her, given that a court had attributed guardianship and custody to Javier.

The prosecutor’s story creepy. According to Carolina’s autopsy and the results of Toxicology, the girl had lormetazepam in her blood, stomach, liver, gallbladder and hair, which means that they had been drugging her for four months with that sleeping medication that the whole family took in bulk . “I did not give it to him,” the mother defended herself yesterday and pointed out, also at this point, to her mother, who is dead and cannot speak. Carolina suffered from an autoimmune disease.

Despite the exculpatory account that Adriana Ugueto reeled off yesterday for hours before the Chamber, in her statement the twenty videos she recorded (she deleted fifteen) and the four handwritten notes in which she said goodbye to her father, her brother and her close friends flew over , found by the Civil Guard after discovering the body of Carolina and her mother with cuts on her wrists, cervical area and legs. An attempted suicide, in the words of the public ministry. An attack by Olga, the mother, before committing suicide at the word of the accused.

In those notes (her mother wrote others in the same sense of the suicidal plan to three) Adriana affirmed: (…) «While I write these lines I only feel peace friend. I need to rest from all this. (…) I asked that there be no wake”, Addressed to two friends. In another for his father he said: «If you are reading this it is because I am no longer here. Do not feel bad or think that you have done something wrong. I don’t want you to feel guilty.” Those addressed to his brother went in the same direction. The accused assured yesterday that they were not farewell letters, but that they expressed their feelings. And that the videos were recorded in case something happened to her, in reference to the conflict she lived with her ex-partner, whom she assured that “she did not attend to the girl” and returned her one day with a black eye and another with a scratch and a nibble. The recordings, according to her, were to leave everything tied up in case her ex’s family did something to her.

The accused mother chained more than questionable arguments to directly point to her as the author. It was Olga, the child’s grandmother, with whom they lived, who booked the crime hotel, the one who paid, the one who asked him to take her to Logroño, the one who searched the internet for information on buying poison, cyanide, killing rats, slitting one’s wrists, suffocating a person, how long it takes a person to bleed to death by artery cutting and a few other methods.

He arrived with the lesson learned to try to give an explanation to each accusation of the Prosecutor’s Office. “On this trip I just think Carol and I are going together,” she wrote. According to her, she talked about “not going to the park across the street, she was going to Miranda or Vitoria.”

The weekend of the events, her mother woke her up at a quarter to seven, on Sunday, and told her: «You have to take me to a place» and got into the car with the girl without her explaining anything. «He told me: I just want to think, you shoot for Logroño». Then they were in the room of the hotel «Los Bracos». They watched cartoons until she and the girl fell asleep. His eyelids felt heavy and he saw himself in a bathtub filled with blood and water.

«I don’t even know how I find the strength to open the partition and go out to the room, I see that my mother is not there, I go to bed, I uncover the girl and seeing her like this and with the weakness that I am falling is when I open the window and try to jump, “he told the prosecutor’s questions. She did not make the cuts: “I only know that I fell asleep and felt a zap.” But there were no drag marks in the room and there was blood on all three beds, especially Carolina’s.

He denied having opened the door to the police and having left the hotel, as seen on the cameras, the day after his daughter died, when the body had not yet been found. “I do not leave the hotel, it will be recorded, I have worked on it with the psychiatrist, but I do not remember leaving the hotel.”

The rosary of denials in the face of very clear evidence was the keynote of his long statement. That and blaming death, his mother, whom he assures that he obeyed all his orders. The last months of Olga’s life also reached the first session of the trial. The woman suffered a scam due to the “Love Scam” procedure that caused serious damage to the entire family. An individual led her to believe he had a sick child and was going to pick her up to take her to London to see him. The result was that he plucked her. Everything conspired against Carolina. The legal battle, the hatred of his mother and father, the swindle of his grandmother…

Clara Campoamor’s lawyer summed up this tragedy: “It is the hardest case that has touched me in fifteen years.”