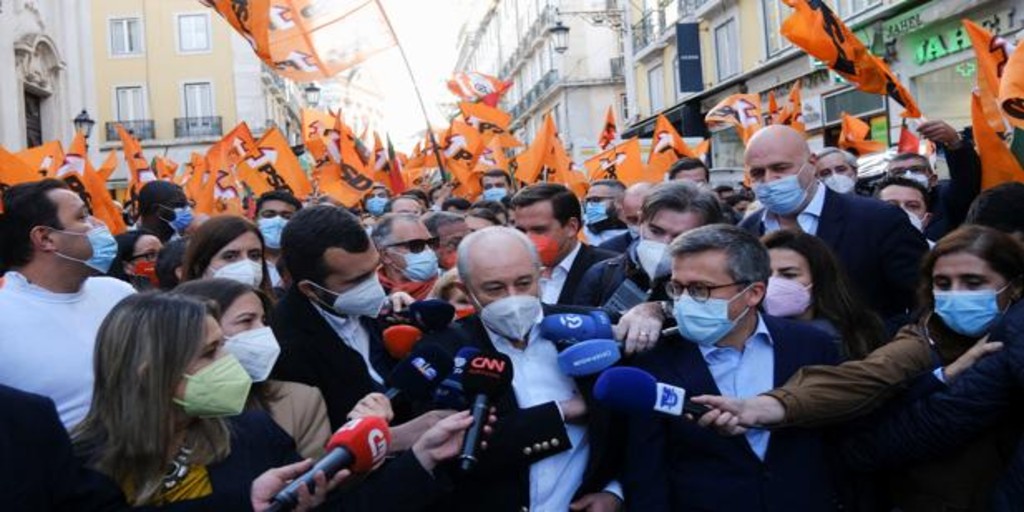 The Portuguese right struggles not to sing a fado

The President of Portugal, Marcelo Rebelo de Sousa, made it clear when he called the early general elections a couple of months ago: “The legislative ones are the only way to end uncertainty.” And D-day has arrived, just when the socialist government is seven years old and certain sectors are calling for change.

Never before in the more than 47 years of democracy, ranging from the Carnation Revolution until today, some General Budgets had been knocked down and there the seed of hasty elections was sown. There was no other solution than to dissolve the Assembly of the Republic and watch the evolution of events, since the communists and the Bloco de Esquerda (equivalent

United We Can) did not give their arm to twist and the ashes of the ‘geringonça’ (not a coalition), in force between 2015 and 2019 with the support of those same two formations, were shattered.

In recent days, the tension could be cut in the environment. Swords are high in the Portuguese political arena, which has been campaigning for weeks, after Christmas was marked by appeals to voters, especially due to the start of the barrage of television debates between the candidates.

Nothing less than 36 dialectical clashes in the different chains, with several days punctuated by three of them throughout the afternoon-night and He arrives, a party similar to Vox, giving the note with much more extravagant proposals than its Spanish ‘brothers’.

But it was the closing day of the activities when the carousel of percentages precipitated, with the two main leaders closing their speeches a few meters away.

Amid the crowds, Antonio Costa chose the heart of Chiado to cheer on the socialist hordes, while Rui Rio gave him the reply before the orange tide of the PSD next to the emblematic Arch of Rua Augusta, in the Baixa.

It was a double appearance marked by the latest polls, which cast a 35% of the votes for the PS and 33% for the moderate ones. Surprise, therefore, is possible and all options seem to be open.

And the fight for third place is also getting closer, with the Bloco de Esquerda hovering around the 6% barrier, as well as the Liberal Initiative and the omnipresent Chega, whose leader, André Ventura, is attracting supporters on the right flank among supporters of the PSD disappointed with the non-belligerent strategy of Rui Rio. An inveterate populist, capable of recognizing that he was not vaccinated and pointed out as a “bad example for the Portuguese” for this circumstance. To cut off a possible cascade of reactions against him, he has already promised: “I will get vaccinated soon.” There his warning remained before the outbreak of the ‘Djokovic case’.

While the Socialists continue to entrust themselves to the current Prime Minister, Anthony Costa, the main emblem of the opposition has not made the leap to change its visible face and continues in the hands of a Rui Rio who has shown (once again) his apparently lukewarm profile in the debates where he has been seen.

So much so that he has already announced his willingness to agree with his great socialist rival in order to “guarantee governance” of the country. So many Portuguese do not understand how it is possible to unveil a letter of such caliber before the elections.

The critic Paulo Rangel he was about to evict him from the leadership of the PSD, but finally Rio recovered and won the primaries of the formation, held at the beginning of December. He came out stronger and his idea of ​​reuniting the right is bearing fruit, judging by what ind

However, the Portuguese conservatives are fearful of Chega’s progress and also of the emergence of the Liberal Initiative (IL), thanks to the work carried out by Joao Cotrim de Figueiredo.

Both the latter and Ventura do not hesitate to raise their voices to denounce the political anesthesia to which the socialist government subjects the Portuguese population… since since they came to power at the end of 2015 they cover up the many real problems with falsely idyllic institutional statements that they draw a kind of unreal country.

All in all, Rui Rio benefits from the intentions of the moderate vote and Costa’s relative wear and tear due to the management of the coronavirus pandemic, not as erratic as that of Spain but increasingly discussed for its lack of results.

These elections are taking place in a time frame that is not ideal for the Portuguese right. He believes in the prospect of a victory but that he continues to depend more on the demerits of others than on his own successes. “Only six months ago, few believed that unseating Antonio Costa could materialize,” analyst Nuno Gouveia told this newspaper.

The same expert argues: “After the departure of Passos Coelho from the leadership of the PSD, the right has not stopped immersing itself in a process of reconfiguration and the upcoming elections will represent confirmation in this regard.”

If Rui Rio wins, he will continue his work. If he loses, his political future becomes quite complicated. There is no going back to your destiny.