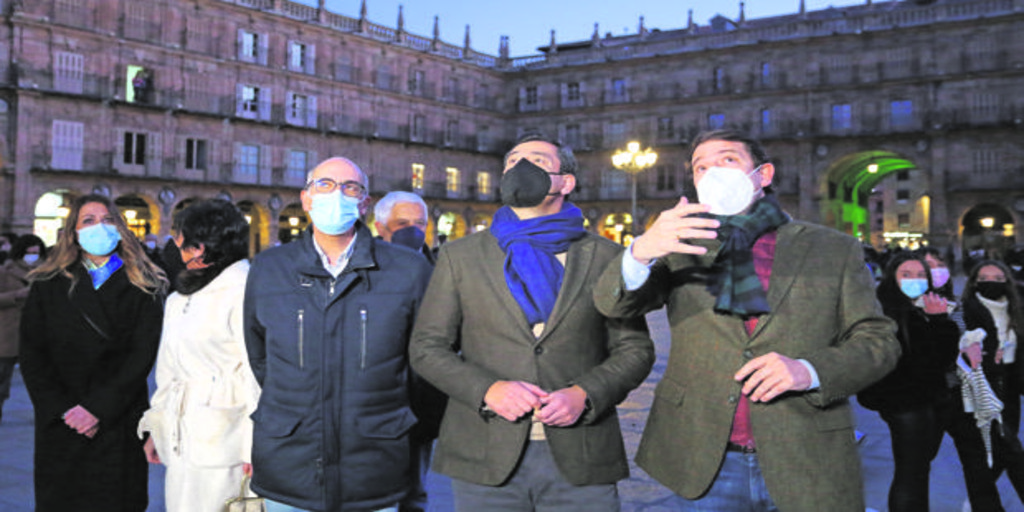 The PP of Castilla y León has wanted to ‘play at home’ to start with the acts of the electoral campaign, so yesterday morning the secretary general, Francisco Vázquez, went to Segovia, land, and in the afternoon to Salamanca, city of the candidate Alfonso Fernandez Manueco, in which, in addition, he was mayor. And in this first electoral act, Mañueco arrived and won because the room of the hotel in which it was held, with a capacity for 500 people, was too small and many people had to follow the rally standing up and almost from the door. .

Before, the PP candidate for the Elections in Castilla y León made a brief walk through the center of the capital of Salamanca to show its beauty to the guest of the day, the president of the Junta de Andalucía, Juan Manuel Moreno.

Stop in the Plaza Mayor, where they looked for the best frame to immortalize the moment before beginning an intervention that served Mañueco to warn that on 13-F “the role of Castilla y León in Spain is decided” and for that there are two options : «Sánchez’s radicalism and sectarianism, which can be installed in one way or another, or my Government’s project for the future to make the Community grow».

The “danger” of Sánchez

As he has done throughout the pre-campaign, Mañueco focused his criticism on Pedro Sánchez without ever naming the socialist candidate, Luis Tudanca. Only Sánchez as “danger to companies, people, the self-employed, farmers…”. Faced with this, he recalled his announcements such as the 9,500 euros to the self-employed for each job they create or the tax shield of the Community, to respond to the tax increase proposed by the socialist government. In a university city par excellence, the popular leader focused especially on education to defend the free choice of center, with public and concerted centers and demanded a single entrance test to the University.

And he ended up haranguing his supporters to a “total mobilization because every vote counts.” “Let no one trust the polls, neither the good ones nor the bad ones. The only one that counts is the February 13ththat no one stays at home.” For this reason, he asked “to make calls and concentrate the vote to avoid the plague of sanchismo in Castilla y León.”

Before the popular candidate intervened as “opener”, as he defined himself, Juanma Moreno, who was applauded and who, with his characteristic wit, drew many laughs from the audience. He complimented them on a “wonderful and magical city” and also on Mañueco himself, highlighting his “dialogue nature” and his “balanced, serene and non-shrill” way of acting. “I have looked at the management you have carried out with healthy envy,” he told the attendees, to whom he also warned that 13F “is a litmus test that not everyone is capable of passing.” “Here we are risking the future of this community and many things, such as giving the Sánchez government air, oxygen.” At this point he joked by pointing out that once the 13-F is over “I’ll go later”. “You shoot first, I’ll go later,” he repeated to Mañueco, to whom he insisted that “the important thing is that you do well.” “For fellowship, you have to help me too, to see if you are going to scare me,” he emphasized and started the laughter of the attendees.

Before this first meeting that will lead to February 13, Mañueco visited the Verescence glass factory, in the Royal Site of San Ildefonso, “which demonstrates the strength of Segovia’s industry in Spain and in the world.” At the gates of the factory, he also referred to the election debates, the first of which will be held next week, to regret that “the rest of the formations have not taken a step forward” so that more formations than the three established by the Electoral Law would have participated.

In terms of the program, he specified some of the promises already announced, such as allocating aid to companies amounting to 400 million euros in the first year of the legislature or 2,000 million to carry out 12,000 financial operations during the legislature. Then he went to the capital of the aqueduct where he visited the new day center of the Association of Alzheimer’s Patients.