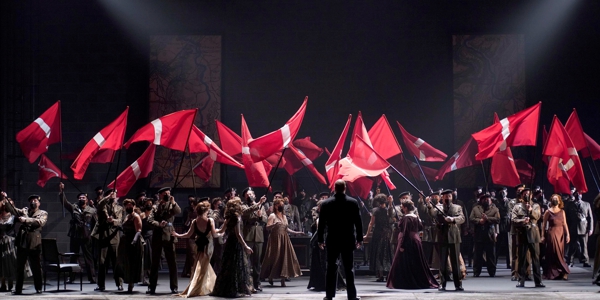 Once it has been decided that ‘The Ring of the Nibelung’ is an artistic project capable of recognizing the history of civilization, it only remains to assume that any of its interpretations must be understood as a partial vision of the cycle. The film by Robert Carsen and Patrick Kinmonth, as it has been presented at the Teatro Real, now concluding with ‘The Twilight of the Gods’, is oriented towards the deterioration of nature as the mechanism of a world pushed towards destruction, although everything this is present on the third day in a less insistent way. The personal drama, the dramatic consolidation of betrayal, occupies a fundamental part of this work and the theatrical quality of the proposal is ascribed to it.

If the underlying argument had been rigorous in the first works of the cycle, it is evident that now it is diluted until it is left in a less relevant place.

In ‘Twilight’ culminating moments are shown with remarkable scenic brilliance, whether it be the return to the court of the Gibichungs (to their fascistic palace) or more at the end when Carsen’s genius emerges with disturbing nudity. Siegfried’s voyage or Brunnhilde’s immolation sounds like a closed curtain, they are singularly expressive gestures before the schematic and nebulous scene of the Valhalla fire is discovered. The final destination bears little resemblance to that fetid and scrambled subterranean world in which ‘The Gold of the Rhine’ was submerged.

But all of this must be accompanied by music, since any analysis of the Tetralogy recognizes that this is where the spiritual essence of the work is, the element that amalgamates the whole. Pablo Heras-Casado was heard floating on the surface before the score of the prologue while proposing a brilliant and effective version of the title, he maintained restraint in ‘La valquiria’ with a meticulous reading; he reassembled the orchestra in ‘Sigfrido’ bringing percussion and harps to the side boxes on one side, and tubas, trumpets and trombones on the other, which allowed for an unprecedented spectacularity to be discovered. It returns to that same layout in ‘Twilight’, which requires a closer look. Apart from the need to establish this provision for health reasons (that is, to assume the solution as a lesser evil) it is very doubtful that the remedy will work effectively. Last night’s interpretation accentuated it in the shadow of a disjointed first act and without tension, which highlighted the discomfort of listening to secondary parts in the foreground, mere hints of color at times, while the pit orchestra, especially the strings , was left in a very secondary position.

The general sonority as a significant part of the work suffered with it. The second act and the third act got better, until achieving an important ending, which suggests that there will be better days. Last night, in the first performance of the title, it was difficult to start and temper, especially the voices. Andreas Schager (Siegfried) stood out by maintaining a homogeneous and dedicated level, while Ricarda Merbeth (Brünnhilde) waited until immolation (which is a long wait) to show that her voice is not as dilapidated as it seemed. The three norns (Anna Lapkovskaja, Kai Rüütel and Amanda Majeski) were great and the rest were reserved, from the unstable Lauri Vasar (Gunther), to the scarce and light Stephen Milling (Hagen) passing through the acceptable interpretations of Amanda Majeski (Gutrune) or Michaela Schuster (Waltraute). Those who did not leave the theater ended up enjoying a curious performance.

‘The sunset of the gods’Royal Theater, Madrid

The first seasons of the Teatro Real, from its inauguration on October 11, 1997, formed an exciting test of effort. Wagner joined soon. He arrived with ‘Parsifal’, under the musical direction of García Navarro and with Plácido Domingo. Months later, Daniel Barenboim conducted ‘The Mastersingers of Nuremberg’ for the Staatsoper Berlin company. Although the burst of happiness that such productions brought with them was hardly a smile at the announcement that the theater was tackling its first Tetralogy.

The idea came from the musical director, García Navarro, who, now deceased, was honored in the presentation of the prologue. In 2002 there was talk that the Real “is already ready to take on the Ring” although the maestro Peter Schneider clarified that the orchestra “has taken a while to feel comfortable”. Raised at the rate of one title per season, a common team was assumed, A Schneider was joined by the theater director Willy Decker, signing a co-production with Dresden. Hartmut Werker, Alan Titus, Luana DeVol…, Domingo and Waltraut Meier sang. Texts and guides circulated, including Miguel Llul’s Spanish translation of Deryck Cooke’s recording of the driving themes of the Ring, which had accompanied the first ‘modern’ recording with Solti.

The Ring is a display of robustness that any opera house aspires to exert. The Pérez Galdós de Las Palmas did it in its reopening (2007), with Gergiev in the pit and an inconsequential result; It was intended by the Palau de les Arts in Valencia (2009) with Zubin Mehta and the staging of the Fura dels Baus, reaching a superlative artistic dimension. Both examples limit the subjection to a ‘work’ whose dimension, physical and significant, transcends the encompassable. In Madrid it is known that that first Tetralogy of the Real was naive, decorative, devout and debatable. The memory forced a second chance consolidated in the current replacement. At the rate of one title per season, the continuity is established by the musical director Pablo Heras-Casado, in his first approach to the cycle, and Robert Carsen and Patrick Kinmonth, authors of the production premiered in Cologne in 2010. The final stake takes shape these days staging ‘The Twilight of the Gods’.