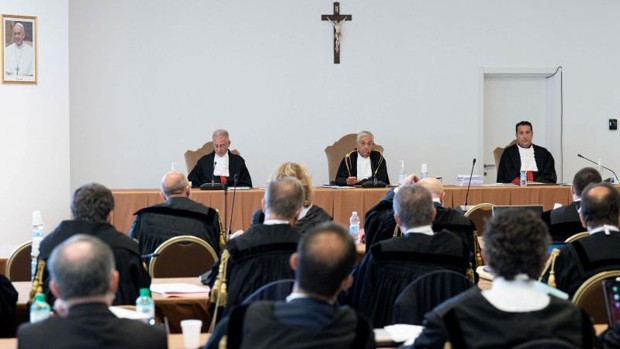 The trial against Angelo Becciu and between five and eight other defendants you will have to keep waiting weeks or even months, until the president of the Vatican Tribunal, Giuseppe Pignatone resolves the litany of procedural objections filed since the first hearing, on July 27.

The macro process in the Vatican is still sandblasted in its preliminary phase, Well, the defense maintains its objections and today has presented others during the sixth hearing.

The lawyers of all the defendants assure that the prosecutors have not deposited the evidence nor the transcript of the interrogations, as provided for by the procedural code used in Vatican City. Therefore, they ask for the annulment of the process.

The prosecutor washes his hands a little and replies that the deposit depends on the judicial police.

Therefore, the only great practical result of today’s session has been that the prosecutor and an expert appointed by the defense will control the presence or absence of evidence.

Among the key material they request are phone interceptions and files from computers, tablets and phones phones seized by the Vatican Gendarmerie, and the recording of the interrogations of Monsignor Alberto Perlasca, who was for years head of the office of investment of reserved funds of the Secretary of State.

In favor of the prosecutors, it must be recognized that the process is extremely complex and delicate. Angelo Becciu is accused of alleged embezzlement offenses by diverting them to his family’s charities; also of abuse of power also in complicity, and pressure on the main witness to retract.

The suspicions towards his collaborators they are much more serious, in that they took millions of euros from the Vatican through deceit, complicity and an intricate network of buying and selling operations in intermediary companies.

Cardinal Angelo Becciu has elegantly preferred not to be present today, as his lawyers have objected to part of the interrogation in which the prosecutor asked Monsignor Perlasca if there was a sentimental relationship between the cardinal and one of the defendants. “I don’t know,” the witness would have replied, and would have repeated the prosecutor’s insistent questions.

As the procedural code prevents questioning witnesses about the moral conduct of the accused, the cardinal’s lawyers have also tried to delegitimize the process in this way.

In September 2019, Angelo Becciu was deprived of cardinal rights and privileges but not the title.

On the other hand, the prosecutor has presented again the charges against four defendants, that during a previous hearing were dismissed for lack of evidence. They are the financial manager Raffaele Mincione, the lawyer Nicola Squillace, the Vatican official Fabrizio Tirabassi and the former secretary of Becciu, Mauro Carlino.

In October the court asked them redo summary and review some accusations. This morning the prosecution has presented “seven folders” with new documents that support the request to be sent to trial. The president of the court wants to review it calmly and has summoned them to a hearing on February 18, where he will decide whether or not the evidence allows them to be included in this same process.

The prosecution detected the looting of the Vatican’s reserved funds in 2019, and the macro process began in July 2021. The only thing that is clear is that it will not end soon.