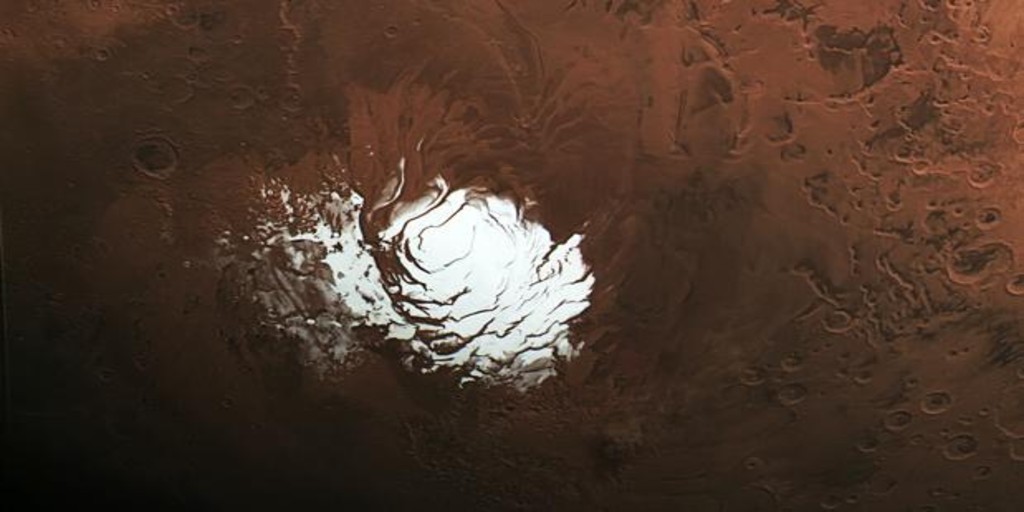 In 2018, a team of Italian astronomers claimed to have found a large lake of liquid water under the icy surface of the south pole of Mars. A finding that gave rise to thinking about using these water reserves in some way, while completing the puzzle of the history of our neighbor. Now, however, a group from the University of Texas at Austin claim that it was actually a ‘mirage’, and that those bright reflections were the product of flashes from volcanic rock buried under the ice. The findings have just appeared in the magazine ‘
Geophysical Research Letters‘.

“For water to sustain so close to the surface, you need both a very salty environment and a strong locally generated heat source, but that doesn’t match what we know from this region,” he says. Cyril Grima, a planetary scientist at the University of Texas Institute for Geophysics (UTIG) and lead author of the study.

The south polar mirage dissolved when Grima added an imaginary global ice cap via a radar map of Mars. The imaginary ice showed what the Red Planet’s terrain would look like when viewed through a mile of ice, allowing scientists to compare our neighbor’s features with those found below the polar cap. Grima noticed bright reflections, like those seen at the south pole, but scattered at all latitudes. And, in addition, they coincided with the location of volcanic plains.

A similar phenomenon occurs on Earth: iron-rich lava flows can leave behind rocks that reflect radar in a similar way. Another possibility is that mineral deposits exist in dry riverbeds. Either way, the researcher says, finding out what they are could answer important questions about the history of Mars. Because while there may not be any liquid water trapped under the south polar cap, there is plenty of water ice, hinting at Mars’ wet past.

Isaac Smith, a geophysicist at the University of York, thinks the bright radar signals are a kind of clay that forms when rock erodes in water. In 2021, Smith, who was not part of either study, found that terrestrial clays reflected radar brightly, much like the bright spots in the 2018 south pole study. Grima is that while it shoots down the idea that there could be liquid water below the planet’s south pole today, it also gives us really sharp places to look for evidence of ancient lakes and riverbeds and test hypotheses about Mars’ greatest climate drought. for billions of years,” he says.

Grima’s map is based on three years of data from MARSIS, a radar instrument launched in 2005 aboard the European Space Agency’s Mars Express that has amassed huge amounts of information about the Red Planet. grin and Jeremiah Mouginot, a research scientist at the Institute of Environmental Geosciences in Grenoble, France, and co-author of the study, plan to dig deeper into the data to see what else MARSIS can reveal about Mars.

For Smith, the study is a sobering lesson in the scientific process that is as relevant to Earth as it is to Mars. “Science isn’t foolproof on the first try,” says Smith, an alumnus of the Jackson School of Geosciences at UT Austin. That’s especially true in planetary science, where we look at places no one has ever visited and rely on instruments that remotely sense everything.” Grima and Smith are now working on proposed missions to find water on Mars with radar, both as a resource for future human landing sites and to search for signs of past life.