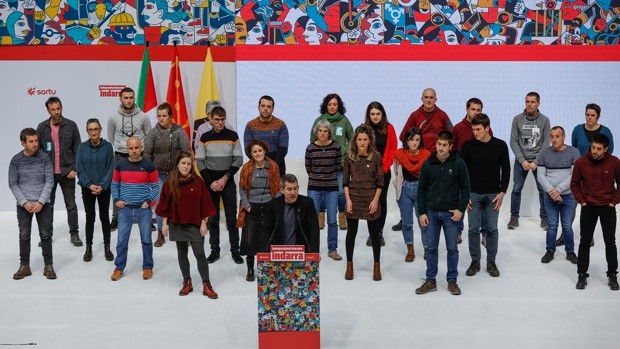 David Pla, Elena Beloki and Haimar Altuna are the three former ETA members who joined the management of Sortu this Saturday, controlled by Arnaldo Otegi. The first was the last head of the terrorist group and read the statement of “definitive cessation of violence” of October 2011; the second, a historical one, directed Xaki, the band’s international apparatus; and the third served a six-year sentence in France for belonging to an armed gang, forgery of documents and illegal possession of weapons. The three were on the only list that was presented at the congress of the heirs of Batasuna, which had 89 percent of support.

: «We are what we are, and of course we are not traitors». The incorporation of these individuals to the management of Sortu, as recognized by the same sources, is explained as a maneuver to try to placate the critical sector of the party, whose alternative paper to the official one has had the not insignificant support of 22 percent of the militants who have voted.

prisoners on the street

This sector accuses Otegi of making too many concessions to the Government without significant compensation. The first of them, of course, should be the release of the prisoners to the streets, which now becomes an essential condition for the abertzale formation to support Pedro Sánchez in the next legislature, as this newspaper advanced. Catalan and Galician nationalists, always according to sources from the Abertzale left, would also be in that key.

In any case, at yesterday’s congress there were no surprises. Dozens of ikurriñas and flags from Navarra celebrated the re-election of Arkaitz Rodríguez as general secretary of Sortu at the Bilbao pediment. Also that of David Pla, since this weekend responsible for Strategic Orientation at Sortu, he was the last head of ETA, and that of Elena Beloki, historical of ETA. He will deal with the international relations of the pro-ETA formation. Beloki, curiously, is one of the visible heads of the critical paper with the official line.

Sortu’s dissidence criticizes the institutional pragmatism that has staged the abertzale formation in recent times. He believes that agreeing with the central government or with that of Navarra is a mistake. They consider, for example, that supporting the budgets of Pedro Sánchez, indirectly, also supports the Royal House or the Basque AVE.

This dissident sector, which together with Beloki is led by the former leader of Herri Batasuna, Joseba Álvarez, or Carmelo Landa, who was sentenced for the case of the herriko tabernas, refuses to admit that ETA’s terrorism was unjustifiable. They have also harshly criticized the pressure that has been put on the group of prisoners, the EPPK, to the point of getting them to oppose the ‘ongi etorris’ to receive the released prisoners.

In his opinion, the Basque independence movement needs a more combative posture in the streets. In fact, this critical sector is credited with the banners that appeared a month ago at the University of the Basque Country in support of the hunger strike that ETA member Daniel Pastor had started, or the ‘ongi etorri’ that was held in Pamplona Iñaki Etxeberria on Christmas Eve, when the EPPK had already asked that they not be held.

The nationalist left does not believe that there is a real risk of a split, but the truth is that in recent weeks it has been forced to wink at this dissident group. It is probably the reason why several party leaders supported the former ETA leader Mikel Antza with their applause, in the trial for his alleged involvement in the murder of Gregorio Ordóñez and also the reason that has led Otegi’s official position to include former ETA leaders in the direction of Sortu.

This Saturday was the first abertzale conclave that Sortu held after the dissolution of ETA. And largely due to the balances that the party has to make in recent times to contain its most critical sector, there was great expectation about the words pronounced by the re-elected general secretary.

Already at the lectern, Arkaitz Rodríguez began his speech with a direct allusion to the ETA prisoners. He recalled that there are no longer any first-degree inmates and that after the latest approaches, there are none left in prisons further south of Madrid.. However, he considered that these gestures are not enough and demanded a “comprehensive and definitive” solution. That is to say; release of ETA members still in prison.

Rodríguez also referred to the victims, but there was no self-criticism in his words; nor references to the damage caused. He limited himself to pointing out that Sortu will continue to maintain its commitment to “all the victims.” «All the victims must be recognized and protected», he pointed out, in a speech in which it was clear that in this matter the nationalist left is not going to take a single step further, «of course we are not going to assume the dictionary that we they want to impose,” say sources in that sector consulted by ABC.

The independence and the return home of the prisoners, therefore, will be the axes of Sortu’s policies, which since yesterday aspires to work to become an alternative to the PNV. That is why Rodríguez asked his supporters to join forces to create “a broad sovereignist and progressive front”. His bet for the next few years is to ensure that EH Bildu, the brand with which the nationalist left is running for election, governs the largest number of institutions. “We were not born to resist, nor to respond, we were born to win,” he recalled.

But on the same day as the Sortu congress, a very different event was held at the Polloe cemetery in San Sebastián: a tribute to Gregorio Ordoñez, murdered by ETA. For the president of the group of victims of terrorism Covite, Consuelo Ordóñez, what happened yesterday in Bilbao is nothing more than the staging of how the “revolving doors” of the terrorist group work. He highlighted how shocking it is that former ETA leaders are named “brand new leader of Sortu”, while his brother was buried 27 years ago.

Herrigaia presentation (what worries the people), the official

The official statement considers that forces must be accumulated to advance their interests, a concept that has been repeated since the years of terrorism. He advocates continuing to negotiate and agree in the institutions to obtain concessions from the different governments.

The authors of the text that has emerged victorious from the Sortu congress believe that progress should be made in recognizing the damage caused. They defend the reparation of “all” the victims of violence. This is not a novelty; It is the language of always.

The key to the presentation. He maintains that it is necessary to overcome the bloc policy. Its objective is to continue working so that the group of prisoners accepts the current legality and thus be able to promote policies that favor the process of ‘liberation’, its real objective.

Independence will be the fundamental axis of Sortu’s policy. It is committed to working in parallel on strategic axes such as feminism, working conditions, environmentalism or education and thus reduce the space of Podemos.

Sortu’s critics defend street mobilization against the institutional path. That is why the paper, which has had more than 20% support, is against continuing to agree with the governments of Madrid and Navarra and accuses the Bildu leadership of “excessively tactical pragmatism.”

The critical sector of the Batasuna heirs refuse to admit that ETA’s terrorism was unjustifiable and are against any type of self-criticism in this regard. They believe that enough has already been done and therefore they do not agree to continue acknowledging the damage caused.

They do not agree with the latest developments and criticize the pressure that has been exerted on the group of prisoners to renounce the ongi etorris. They share the objective of releasing them as soon as possible, but they differ in the strategy to achieve it.

They consider that independence should be the main objective of the nationalist left. They give as an example the groundbreaking policies of Carles Puigdemont, which went beyond the constitutional framework.