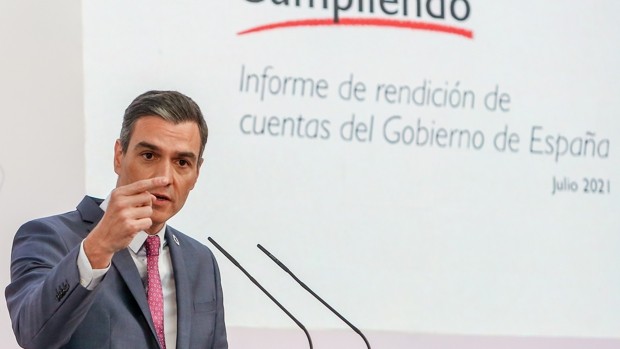 La Moncloa triggers advertising spending by 32%: more than 115 million a year for self-promotion

The government from Pedro Sanchez has stepped on the accelerator spending in propaganda informative and advertising car bomb increasingly irrigated from the State’s general budgets. In just two years, between 2019 and 2020, Sánchez skyrocketed spending on communication Y institutional advertising 32%. And everything points to the fact that in 2021 there will have been another added increase, in view of both the money consumed until November by the communication service and the large forecasts for spending on ministerial advertising announced by the Executive, much higher than those of previous years .

In the absence of the numbers that 2021 throws – they have not yet been published – those of previous years are eloquent. Sanchez settled in Moncloa

on June 1, 2018, thanks to the motion of censure with which he brought down Mariano Rajoy (PP). In 2016 and 2017, the last two full years of the Rajoy era, his government spent an average of 80 million a year on institutional advertising and paying for the communication service –54 million on communication and 26 on official advertising–. However, between 2019 and 2020, the first two full years with Sánchez as head of the Executive, the average annual cost has shot up to 106 million, and climbing strongly. In 2020 it reached 116.7 million euros: 68.8 million in communication and 47.9 million in advertising, according to official documentation compiled by ABC.

On average, therefore, Sánchez has shot up overall spending by 32% compared to his predecessors from the PP. And that without counting the foreseeable increase that has occurred in 2021.

Informative propaganda is in charge of the press service controlled from the Presidency of the Government. Its political leader is Secretary of State for Communication, Francesc Vallès, which this week has sparked controversy by discriminating against media that are uncomfortable for the Executive for their information, including ABC. Vallès decided to segregate the critical media and relegate them to a presentation on european funds. Far from rectifying, Vallès has announced that he does not rule out continuing to use those modes, because he understands that the Government is free to decide who to call and how. “The criteria are those established by the convener,” says Vallès, whose large official communication service consumes about 69 million euros a year, 15 of them in salaries, 3.2 million more than the salary cost that this same unit had in the Rajoy’s last full year at La Moncloa.

For 2022, the budget allocated to this service is even higher. It reaches 79.28 million euros in total, of which 16.12 have been allocated for salaries. Of the rest of the expenses, the largest is the payment to the Efe Agency for covering information “of public interest”. The Government has thus become the largest client of this state news agency. One fact is enough: between January and November 2021, the Government injected more than 40 million euros in this way.

As a whole, between salaries and various management expenses, the communication service of the Government of Sánchez costs 28% more than what that of its predecessors of the PP cost. In absolute terms, it is 15 million euros more expensive.

But the informative self-aggrandizement is only one of the two great legs on which the Government’s expensive propaganda strategy rests. The other is institutional advertising, the enormous flow of public money that is distributed among the media. Official advertising investment is a tempting tool to manage media wills, affiliations and phobias from power. And, the more money available, the greater the potential capacity to influence the media scene. Even more so in times of crisis, in which public advertising gains weight in the aggregate commercial income of news companies. Well, the Sánchez government has not hesitated to shoot up spending on institutional advertising. In practice, this has reinforced its ability to influence the Spanish media scene through advertising investment paid from the budget of all Spaniards. Until 2020 –the last full year for which there is data–, the Executive of Pedro Sánchez had shot up spending on institutional advertising by 42%. And, in the absence of the liquidation of 2021 being known, a year ago it already made it clear that it planned to spend even more, as stated in the plan designed for that year: a record figure of 123.38 million euros was reserved to spend in institutional advertising throughout 2021.

In the last two years of Rajoy’s presidency –2016 and 2017–, the PP government spent an average of 26 million annually on institutional advertising. However, in the first two full years of Sánchez’s presidency -2019 and 2020-, his Executive consumed an average of 37 million per year in advertising actions, and the trend was one of rapid increase: of the 25.91 million spent in 2019, it went to 47.86 million in 2020. The Government of Sánchez justified it by the campaigns launched around the Covid, but two-thirds of everything he distributed in 2020 in official advertising did not leave the Ministry of Health.

By 2021, the Executive PSOE-United We Can decided to shoot even more its budget for institutional advertising. He raised it to the aforementioned 123.38 million euros, and the largest ministry was that of Agriculture, Fishing and Food, with 23.25 million available for advertising campaigns, followed by Ministries ofEcological Transition (16.33 million), Health (14.44 million) and Equality (13.88 million). It is not yet known how much of all that budget that was reserved for official advertising in 2021 has been consumed, because the Government has not yet published this latest annual report on advertising expenses.

The hefty bill is indicative of the number of employees dedicated to these functions, officially called “information coverage.” In other words, the official information service directed from the Presidency of the Government by the Secretary of State for Communication, Francesc Vallès.

According to the official documentation compiled by ABC, the organic workforce of this service is made up of a total of 287 jobs. Five have the category of senior political appointees and 34 are temporary, popularly known as advisers, trusted professionals selected by the Executive for these matters. The staff of the “news coverage” area of ​​La Moncloa is completed with 248 places reserved for career public employees: 99 civil servants and 149 permanent employees. This entire workforce also includes communication personnel assigned to official headquarters located outside of Madrid, such as Government delegations, among others.