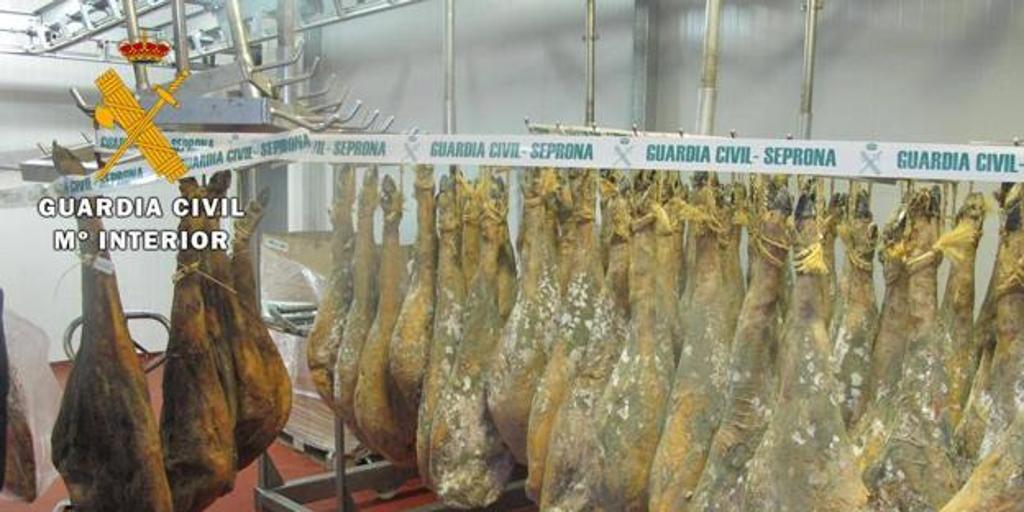 Agents of the Civil Guard, belonging to the Nature Protection Service (Seprona) of Cáceres, have dismantled a criminal organization dedicated to a alleged fraudulent activity related to the meat sector in the province of Caceres. Four people have been arrested and another five have been investigated and the investigation has proceeded. seizure of 1,790 hams and shoulders, 760 kilos of different sausages and 4,500 kilos of frozen meat from the butchering of the Iberian pig. The detainees had direct links with companies based in different provinces, including Toledo.

The investigations, within the ‘Sekai’ operation, began at the end of November 2020, after unusual activity was detected in the vicinity of an inactive meat industry located in an industrial estate in the town of Malpartida de Plasencia (Cáceres).

The agents were able to find out that operations related to the meat sector were being carried out from the facilities of this old company, by another that was not registered in the General Sanitary Registry of Food and Food Companies, and whose purpose is the protection of public health and the interests of consumers, facilitating the official control of companies and establishments subject to registration, as reported this Saturday by the Civil Guard in a press release.

These facilities were carrying out operations for the acquisition, storage, distribution and marketing of food products of animal origin, avoiding the mandatory veterinary controls by the Health Authority competent, in order to introduce them, irregularly, in the food chain.

For this reason, Seprona agents, in collaboration with the veterinary services belonging to the Plasencia Health Area Management (Cáceres), carried out an inspection of the industrial facilities, locating different meat food products inside with the date of consumption modified or exceeded, products with identification marks without a RGSEAA number or non-existent producer or packer numbers, products with non-compliance with regard to the dates of freezing or preferential consumption, evident irregularities in terms of traceability or marking and part identification.

Due to these facts, the precautionary immobilization of 1,790 pieces of ham and shoulders, 760 kilos of different sausages (Iberian sausages, loins, potatoes and black pudding), and 4,500 kilograms of frozen meat, mostly from the butchering of the Iberian pig.

In this process, health controls were dispensed with (records, correct labeling and storage, non-compliance or manipulation in relation to freezing dates or best-before dates and non-compliance in terms of traceability), constituting an illicit food activity.

Similarly, the researchers analyzed the traceability and possible origin of the intervened gender, verifying the entry of food products from these facilities into the food chain, as well as the made available to final consumers in commercial establishments located in the provinces of Cáceres, Badajoz, Salamanca and Toledo.

The agents have been able to verify that the investigated company had implications and direct links with companies based in the provinces of Salamanca, Toledo, Badajoz, Vizcaya and Madrid.

All police actions have been referred to the Court of First Instance and Instruction number 1 of Plasencia (Cáceres).