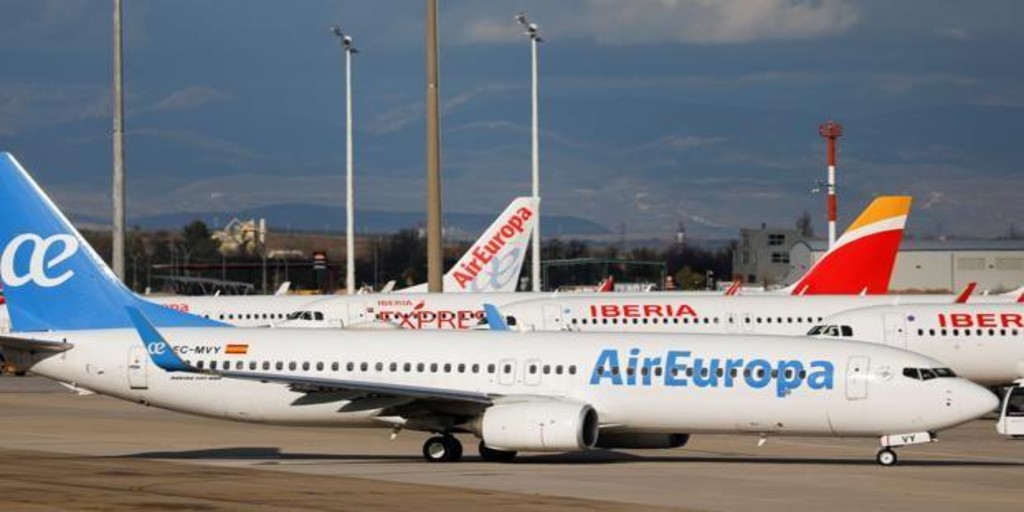 The Government and Iberia accelerate to distribute Air Europa before February

The negotiations for the sale of Air Europa to Iberia have entered, once again, at a decisive moment. Both companies are negotiating the final distribution of the company, talks in which, this time, the State is fully present. The intention is that the State Industrial Participation Company (SEPI) assumes a significant share, but less than 50%, of Air Europa, leaving Iberia with another reference position and the management of the company and the Globalia group with a minority percentage of the social capital. The distribution is not 100% defined, but all the parties negotiate against the clock so that it is finalized before February 1.

The date is not trivial. When Iberia and

Air Europa announced, at the end of last year, the termination of their initial agreement, they also promised to “evaluate before the end of January 2022, other structures that may be interesting for both companies, offering similar benefits for their shareholders, customers and employees”. The proximity of the date has fueled in recent days the possibility that the agreement will finally be broken or delayed even more, also taking into account the complexity of the operation. But sources close to the negotiations are “optimistic” regarding the arrival of an agreement, although they do not rule out that the term is extended.

In any case, the agreement that the parties can reach in the coming days would focus on the percentages of Air Europa that those involved will share. The rest of the agreement, which would already include the destination of the routes of the Globalia group airline, would be closed months later and after another complex analysis. This ‘second part’ of the acquisition will also be fundamental, since it will include the strategy that Iberia will use to ensure that the European Commission or the corresponding competition agency approves the operation. Industry sources point out that the IAG airline is already moving in Brussels to start paving the way.

In addition, these same sources assure that the airline will focus on keeping the international business of Air Europa -which motivated its interest in the Globalia company- and will agree to part with certain national frequencies. However, the matter still seems premature and other sources assure that it is still early to address the possible ‘remedies’ (solutions) that the airline will put on the table to close a purchase that has been eternalized by the outbreak of the pandemic.

Right now, the negotiations focus on the shareholding distribution that will be made of Air Europa. An issue that is not only resolved by those involved, but is also in the hands of an army of advisers and lawyers who work under the strictest confidentiality. “It is a more technical issue than anything else,” say sources close to the talks.

The intention of the State is to convert the participating loan of 240 million euros that it provided to the airline at the end of 2020 into shares and not make additional contributions. How much is Air Europa worth? What percentage of the social capital gives the State that loan? These are issues that are still being debated and that right now condition the future of the operation.

In recent days, the possibility has slipped that SEPI will acquire a 40% stake in the airline, another 40% will pass into the hands of Iberia and the remaining 20% ​​will be managed by the Hidalgo family through Globalia. A distribution that would fit with the words of the economic vice president, Nadia Calviño, who acknowledged in an interview in ‘Bloomberg’ published last week that the Government “is exploring all options” regarding this operation, including becoming a shareholder of relevance of the airline. The sources consulted, however, highlight that the final participation of the tourist group in the airline will be somewhat less than that 20%. In any case, the percentages with which the operation would be closed have not yet been decided.

The forecast is that, in the medium-long term, both Globalia and SEPI will reduce their position in the airline. In fact, the intention of the Hidalgo family, who initially wanted to sell 100% of Air Europa to Iberia, is to get out of the shareholding when the crisis in the airline sector subsides.

The Government would also not feel comfortable with a majority stake in the medium term. But he understands that his presence in the capital is now necessary to save a company that has been severely damaged by the coronavirus pandemic and, today, has a debt of about 800 million.

When the breakdown of the negotiations between the two companies was announced last December, the Ministry of Economy already announced that it would guarantee the continuity of the activity and operations of Air Europa, in addition to assessing “different options” regarding the future of the company . “In this very difficult environment for the air transport sector, The Government will continue working to strengthen business solvency, protecting adequate competition for the benefit of travelers and ensuring at all times the proper use of public resources”, they underlined then from the Ministry of Economy, which described Air Europa as a “strategic company”.

Iberia is aware of this support and believes that it could be key to moving forward with an acquisition that, despite everything, it continues to view favorably. Because by acquiring a stake of less than 50%, it would not have to consolidate the 800 million debt that Air Europa drags on its balance sheet. A circumstance that would make it possible to face a macro-operation like this in a context in which the air sector is still far from reaching pre-crisis levels.

The president of Iberia, Javier Sanchez-Prieto, recalled on Monday at the Hotusa Forum that the purchase continues to be the “best alternative” for both the Globalia Group company and Barajas airport. “We continue to think that it is a positive operation,” said the head of the airline, who also warned that the game “is still being played and the outcome is not clear to us.” The next few days will be key to determining the outcome of the contest.