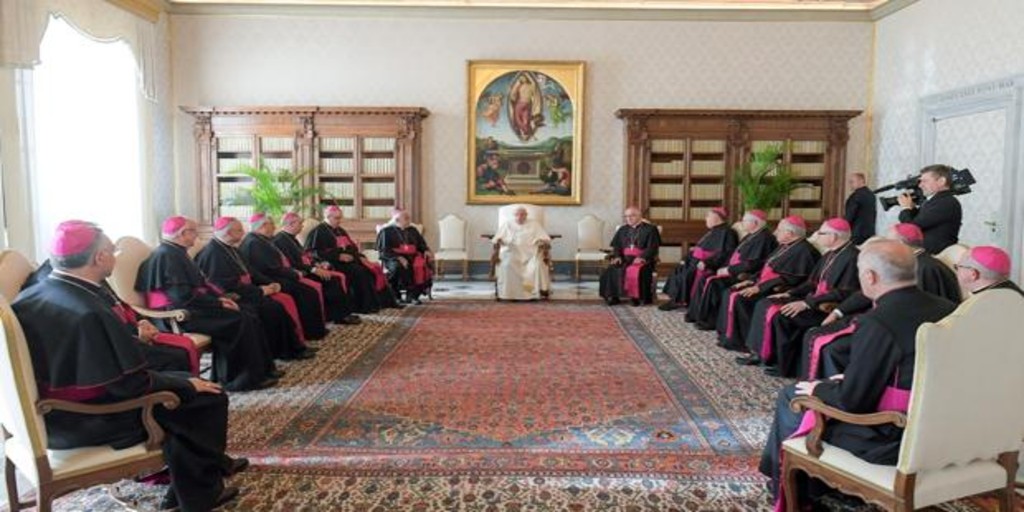 Francisco sends a message to those affected in La Palma: “Rebuilding is hard, but don’t lower your arms”

Francisco He has met for almost three hours behind closed doors with the third group of Spanish bishops on an ‘ad limina visit’, a papal record in this type of meeting. “Many issues have been addressed, nothing has been left up in the air,” one of the prelates confided at the exit.

The ‘ad limina visit’ is the regular meeting that the bishops hold every six or eight years with the Holy See, to explain to the Pope and the Vatican Curia the situation of his diocese.

During the meeting this Friday, Francisco has been responding to the concerns of the bishops. For example, when asked about the migratory crisis, he highlighted the contrast between the “avalanches of emigrants and the empty towns.”

And he has reminded them of their responsibility in building a culture of welcome.

He has also suggested that bet on the culture of dialogue with believers and non-believers, that they jump “the barriers” that eventually separate them, and that they “take care of everyone”. “Approach everyone to help them, not to proselytize,” he asked them.

“He has suggested to us clarity and doctrinal precision, but also mercy with people and with concrete situations,” explained another, respecting the natural reserve of these meetings.

The Pope has instructed them to devote energy to young people, but “not to organize events, but to help them live a life that is an encounter with God.” In addition, he has confided to them that he is “seriously” considering
the invitation to travel this year to Santiago de Compostela.

Francisco has praised the Holy Week processions as a manifestation of popular religiosity, since “they not only transmit values ​​but also an almost physical encounter” through the steps that represent Jesus and the Virgin Mary. Before leaving, the Bishop of Tenerife Bernardo Alvarez has registered with his mobile a message from the Pope to those affected by the La Palma volcano.

“I was very close to you at the time of the volcano eruption, and I still am now. That ash everywhere…” says the Pope. “It must be very hard to see that your house, your ‘campito’ is being covered with ashes and you have to escape to save your life and whatever you can,” he adds. “I accompanied them in those moments and I continue to accompany them now in the reconstruction,” he promises.

“It’s hard, but don’t lower your arms. A reconstruction means always going one step further. It means that defeat does not have the last word. It means not getting tired of looking at the horizon. I am close to you, I pray for you,” he says.

Sixteen bishops from the Canary Islands, Extremadura, Murcia and Andalusia participated in today’s meeting with the Pope.

“The atmosphere was very cordial, positive and family-like. Everyone has felt they have the possibility to speak freely”, explained one of the participants. “The Pope knows the problems of the Church and Spanish society,” he stressed.

The Archbishop of Seville, Jose Angel Saiz Meneses, has described the meeting on social networks as “an expression and experience of communion, collegiality and synodality with the Bishop of Rome”. José Mazuelos, Bishop of the Canary Islands, highlighted the freedom and spirit of dialogue with which the meeting took place. He assures that Francisco has mentioned the “emigration to the Canary Islands, the situation after the eruption on the island of La Palma, the synodality, and the closeness to those who suffer.”

Speaking to Radio Cope, Jose Manuel Lorca Plans, Bishop of Cartagena, has said that they leave the meeting with “serenity and with a supportive pat on the back to continue working.” Among the memories that have been given to Francisco, a comic published in the diocese of Guadix that explains episodes of the Bible to children and adults with a touch of humor.