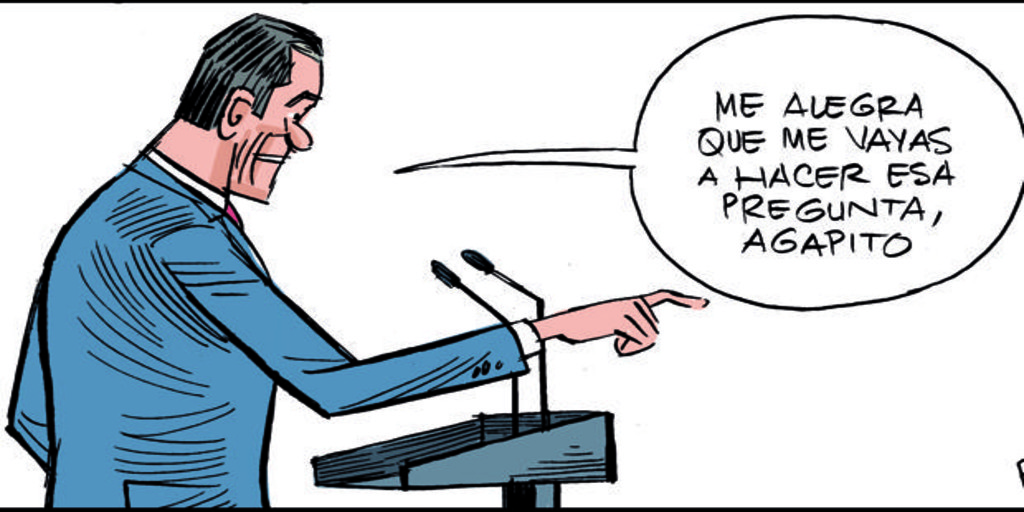 One day he cornered our collaborator, our colleague, to reproach him in sheer fuss in front of witnesses for the newspaper’s editorial line and, like a Scarlett O’Hara, swear to him that he would never give an interview to ABC. It is not a matter of thin skin, of the tremor at the inconsistency of the chameleon speech and the fondness for the slogan of a president molded only for social networks, the clucking, the swearing and the tinkling. A management bluff almost as big as his plagiarized thesis. That he doesn’t love us almost reassures me, we’ll be doing something right. That he use the resources of the State, the power delegated by the ballot box, to play the pathetic Nero, now I raise my thumb, now

no, I like him less because he plays with an advantage.

The least is that he does not want us to interview him, given what he has conceded and above all what he has answered, we have not missed much. Sánchez complies with Bismark’s maxim “You never lie as much as before the elections, during the war and after the hunt” except that in his case he is constantly campaigning on himself, pinching himself before the unusual thing that someone with his scant baggage has come to dwell in Moncloa.

It also happens that his veto denotes the stuff the president is made of. Gather the media, let’s say close, to dictate doctrine, review the script and treat them as what they are surely not, minstrels of power, clappers of the bodeguilla.

It also denotes the degree of nervousness and the professional, servile, lowlife of his entourage. If there was no one to hold the president when he launched himself like a caged tiger on our columnist, there is also no one to tell him “Pres, not like that, we should not and cannot do that, much less veto critical media.” On the contrary, what there is is a battalion of survivors who have already seen how their boss spends it when someone has a voice and, above all, their own agenda. That’s where the parraque enters and the true character of Sánchez emerges. Another fraud.