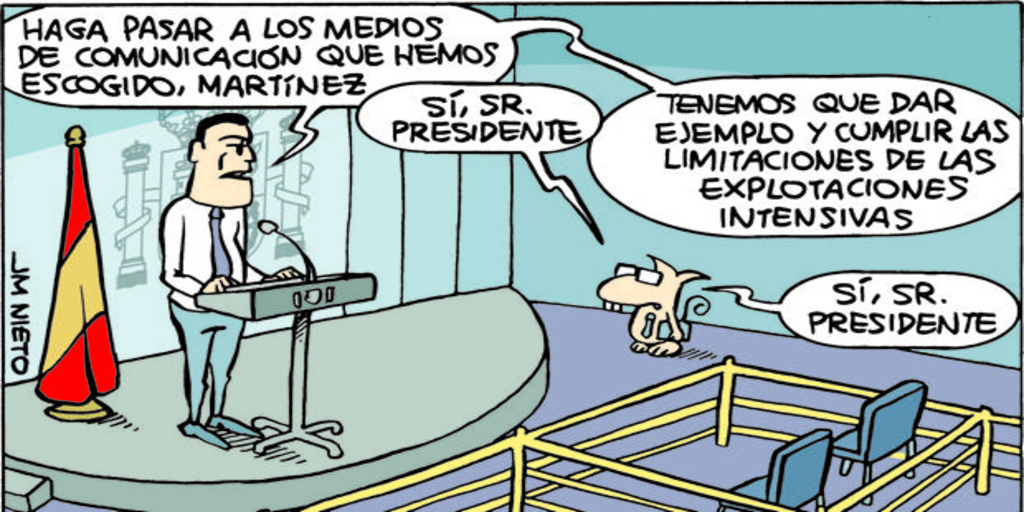 The idea of ​​the Secretary of State for Communication to organize informative meetings, exclusively selecting ideologically related media for this, is not a miscalculation nor can it be attributed to the lie that the anti-Covid protocols prevent dozens of journalists from being summoned to the time Absolutely. That is a premeditated insult to intelligence. Nor is it an error attributable to the Secretary of State for Communication, which for all purposes is a perfectly irrelevant position in decision-making. The veto of concrete and specific media outlets, including ABC or Cope, for example, is a deeply anti-democratic political decision for which only the Prime Minister is to blame. The executors of this policy are not strategists of anything.

They are just submissive public officials paid by all Spaniards, with a salary conditioned by due obedience, and at the service of a new Caesarism against essential freedoms such as those of information and expression. The Government does not want a free press, but rather militant supporters of its cause who exclusively disseminate what it wants to the greater glory of its administration. And there is nothing less progressive, more reactionary, and more contemptuous.

Little more can be said about his ideological sectarianism at this point. However, this exclusion from the media that does not see in Sánchez the messianic leader that he longs to be, and this obsession with not showing his face and calling appearances without question so that no one can monitor him, is especially serious. It betrays the farce of his real concept of democracy because basically he is not vetoing the media: he is telling the millions of Spaniards that they are informed through that critical press that does not have them. That marginalizes them. Which cancels them. They don’t care. He is telling them that he only governs for half of Spain because the other half, the one that thinks differently from him, does not exist.

If Sánchez’s aim is to resurrect that Catalan journalistic model of single editorials that voluntarily submitted to a taming by the independence movement, he is wrong in the effort. What happened shows that Moncloa is afraid. Fear of questions that portray his inconsistencies, fear of not knowing what to answer when his propaganda lies betray him, and above all, fear of freedom in the face of monochromatic thinking. It is the same thing that is happening in Parliament, where ignoring the opposition to circumvent its work is part of that strategy of canceling everything that sounds like dissidence with the authoritarian regime that it is imposing. Quite simply, Sánchez is extending his ‘chiringuito’ of favors to generous means with him to protect his image at all costs. This militantly demanding left, and Pablo Iglesias also shows it, hates journalists because it only wants informative Bolsheviks.

But it is that in addition to offering suspicious dictatorial tics, all this is as absurd as it is innocuous. Trying to convince convinced or blind admirers of the benefits of your government is illogical. Sánchez would obtain more revenue if, by summoning some critical media to his clandestine meetings, he managed to persuade them that they are in error, or that he is always right because he is the true lifesaver of Europe. Moncloa does not want to clarify anything to the media, but rather to indoctrinate them so that they act with woolly obedience because their real objective continues to be to tense and fracture society. Even the very conception of political propaganda is becoming obsolete in that world of sanchista wonders and reserved access to the club of selective Moncloa briefings.