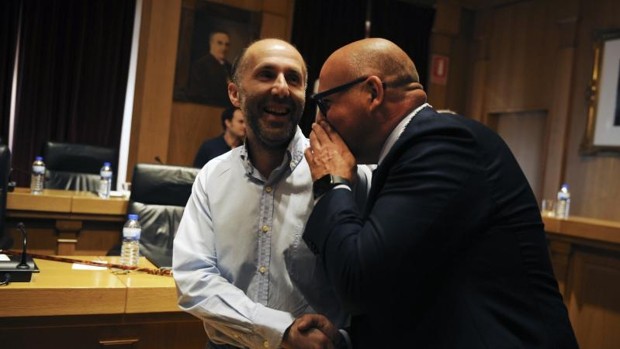 The Orense government plunges back into a new municipal crisis, this time as a result of the disagreements shown by the party founded by Gonzalo Pérez Jácome, Democracia Ourensana, and its government partner, the PP, just over a year before the municipal elections. This new shock comes after a convulsive mandate, which began a few months after the start with the complaint filed by several former mayors of Democracia Ourensana for alleged irregular financing within the party and which led to the subsequent departure of the PP from the local government. Some differences that have become evident again in recent days, in key issues such as municipal budgets and thermalism.

Little remains of that reconciliation seven months ago between the two parties, which ultimately allowed Jácome to recover the coalition, a year and a half after elections, with a pact that falters again.

The discrepancies became evident again in recent days after the councilor from Ourense pointed directly to his government partner as the person most responsible for the alleged lack of management in the third city of Galicia, despite the fact that he is the maximum person in charge of the consistory.

In a press appearance that had the purpose of announcing the new projects for 2022, Jácome disfigured the popular their management in the portfolios in which they have responsibilities, such as urban planning. With a General Urban Planning Plan paralyzed and the budgets still undefined, Jácome accused the PP of not sitting down with them to define the economic lines. The last clash occurred with the situation of the thermalism, blaming the PP that the public baths remain closed.

After several days of silence and in the background, the Popular Party finally broke its silence to make Jácome ugly about his attitude towards the government team. The Councilor for Finance, Ana Morenza, was the first to respond to her government partner, assuring that “the only councilors that move are those of the PP”, quite the opposite of her partners: “The one who is not doing their homework is the mayor’s group”, he exposed. “Jácome considers that for him to do well, Orense will do badly,” snapped the popular spokesperson Flora Moure a day later, who accused Jácome of trying to “denigrate” them so as not to have to show his “frustration with his management, that we consider very regular, very normal».

For the PP, this movement is only due to personal interests and they have invited the alderman to “abandon this way of thinking”, recalling that, for now, the government group is made up of eleven councilors, seven from the PP and four from DO, and not just for one game. “We are not here for you more and you less”, replied Flora Moure, who defended that a government “is a team”, and, therefore, “must have a common objective, and that must be the interest and benefit of the city”.

The last to pronounce on the pact was the president of the Xunta de Galicia, Alberto Núñez Feijóo, who recently openly asked his people “to fulfill their obligations” in order to guarantee the stability of the city. “We are not going to get nervous. We know of our responsibility. And what we have asked each councilor of the PP is that they fulfill their obligations, ”said the head of the Executive, before participating in the Forum of the AVE to Galicia.

With the elections already in sight, the two parties do not hide their disagreements, distributing blame to each other for the problems that the city is going through, waiting for what happens in the Diputación, with the return of Jácome to the provincial entity. Already in his previous stage in the provincial entity, Jácome became the main scourge of the management of the provincial president, Manuel Baltar, whom he came to describe as a “tie psychopath”, although they would finally manage to park their differences by sealing a double pact that allowed them to govern in both institutions in 2019. The open war between the PP and DO is not the only front that Jácome has, who continues to be investigated for an alleged crime of embezzlement of public funds, as a result of the anonymous complaint made by an individual. Recently, several former charges of his formation, who currently militate in the ranks of the Democratic Center Coalition, appeared at a press conference to denounce that Mayor Jácome had tried to “buy” their minutes.

Specifically, the three former DO councilors who are now members of the Coalition of the Democratic Center (CCD), Maite Garrido, María Dibuja and Manuel Álvarez, together with the coordinator of the CCD, José Manuel Palacios, denounced the alleged “Attempted purchase” by Jácome of minutes to former councilors, with amounts of up to 30,000 euros, if they left the record; either directly, or through “intermediaries”, always depending on their version. In said appearance, Palacios assured that the councilor had come to offer some councilor amounts of up to 30,000 euros if they left the minutes, and even two thousand euros a month to someone “if they kept the minutes but voted following the instructions.”

The mayor of Ourense, who for the time being has distanced himself from these accusations, has limited himself to inviting “the turncoats” – he recently did not want to respond to a journalist if he did not use the word turncoats – to “go to court” if they have any evidence, without ruling out the possibility of filing a lawsuit “for defamation” himself.