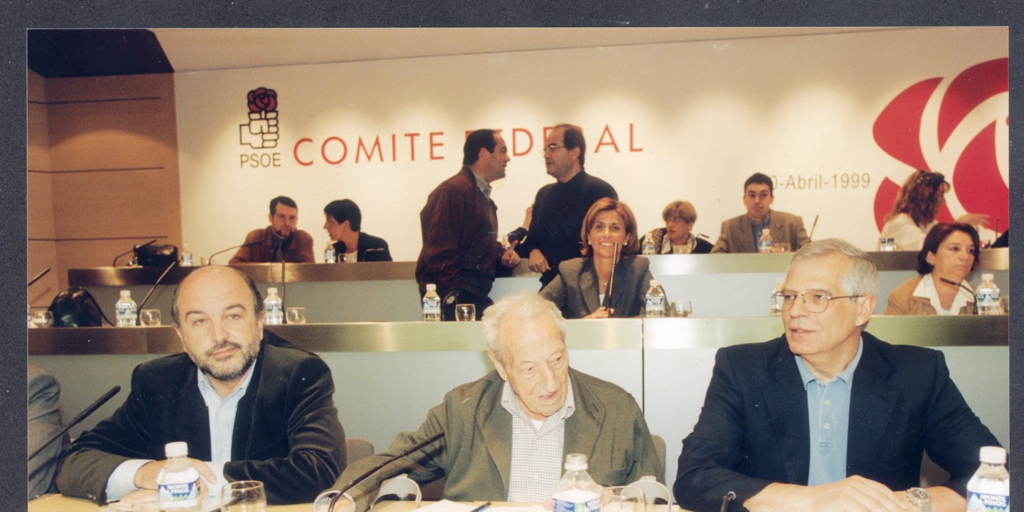 The personal and political archive that the former president of the Congress of Deputies, the historical socialist Joseph Bono, has deposited this week on the website of the Pablo Iglesias Foundation, reveals the internal debates of the PSOE at the end of the 1990s, after the departure of Philip Gonzalez from the general secretariat in 1997 after more than two decades as party leader. They were convulsive years for the formation, which would not end until the XXXV Congress of the year 2000, in which an unknown Jose Luis Rodriguez Zapatero he was elected general secretary.

In early 1998, Joaquin Almunia led the party but just that year, in the first primary elections organized by a political formation

in Spain, he would be defeated by Josep Borrell, which forced a cohabitation between both that enormously tensed the internal coexistence.

While, Jose Maria Aznar He was facing his second year as Prime Minister, in a first term supported by a precarious majority that depended on the Basque and Catalan nationalist parties. 1998 was also the year of the historical sentence of the Supreme Court to the former numbers one and two of the Interior with González, Jose Barrionuevo and Rafael Vera, for the kidnapping of Segundo Marey, one of the most notorious actions of the GAL, the group that carried out the dirty war against ETA in the eighties under the socialist governments.

The “ballast” of corruption

The PSOE, in that year 98, was seen for the first time in many years in the opposition and the ballast of the corruption cases of the González era weighed on its political action, as several of its leaders admitted in the meetings of the leadership of the party that now see the light thanks to the so-called ‘Bono papers’, made public by the former Minister of Defense and former president of Castilla-La Mancha.

At the beginning of that year, before Borrell won the primaries against Almunia, the party’s candidate, and before they both led, together with Felipe González, a demonstration of leaders and militants that accompanied Barrionuevo and Vera to the gates of the prison in Guadalajara, where they began to serve their sentence, two consecutive meetings of the Socialist Executive in Ferraz, those of February 16 and 23, seriously debated whether to proclaim Aznar’s electoral victory two years earlier as “illegitimate” or even brand it as a “quasi coup plotter”. ». This last expression was used in the first of the meetings Manuel Chavez, at the time president of the Junta de Andalucía and who would end up being convicted and expelled from the PSOE for the ERES scandal. Chaves and other of the most ‘felipista’ leaders of that leadership did not hesitate to question the new majority resulting from the last general elections, which made political alternation possible after fourteen years of González, the president who has been in office the longest. can. Thus he said, among others, Francisca Sauquillo, while the former defense minister, Narcís Serra, called for “ending the crime syndicate”, the derogatory way in which the socialists referred to a series of critical journalists and media, “for the good of the country”.

Bono himself disagreed with his colleagues in the management, according to the minutes of the Executive. The then Castilian-Manchego president said that Aznar’s victory could not be denied legitimacy, and that doing so “would be dangerous.” “Our hopes of electoral victory cannot consist exclusively in stirring up the past,” he said. Nor did Borrell support the strategy of his colleagues (among them a young Zapatero) although he did not express himself as clearly as Bono.

The debate was sparked by an interview with the former director of ABC, Louis Maria Anson, in ‘Time’, made by a brother of the former socialist minister Juan Alberto Belloch. The defunct magazine maintained that Ansón “confessed” to a “conspiracy” against González, something that the journalist considered an interested “manipulation” of his words as a result of the “growing nervousness” of the former president over the GAL case. “To the question ‘Was there a conspiracy?’ my answer was clear. That was a journalistic alibi, there was no conspiracy,” said Anson, who denounced that despite this “felipismo launched the conspiracy campaign, distorting the spirit and letter of my answers, manipulating everything and exacerbating the intoxication to the point of disproportion. ».

Finally Almunia chose to turn the page. The socialist leader explained to his colleagues that, although the controversy had put the PP “on the defensive” and that it could have “positive consequences” for the PSOE, the socialists ran the risk that the debate “turned” towards the troubled past of the end of Gonzalez.