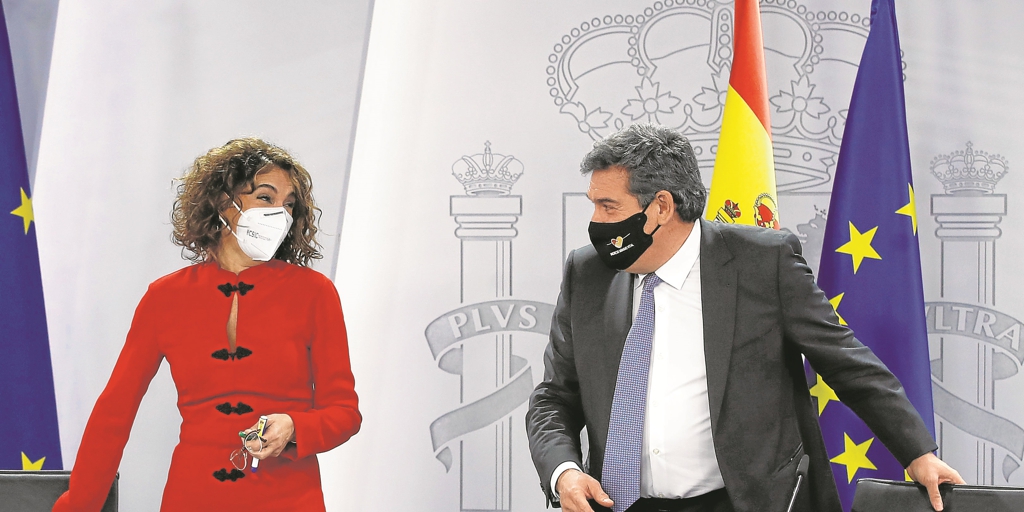 The PGE include twelve amendments without funds, which forces cuts

Twelve amendments introduced by the PSOE and its partners to the new General State Budgets (PGE) lack quantification and specific funds allocated, and were not compensated by lowering other items despite the fact that they increase public spending or decrease revenue. This implies that the affected ministries will now have to make cuts in order to reconcile their accounts and that, therefore, they will not be able to comply with the Budgets as approved.

The vast majority of these amendments, eleven of them, are assignments that the Government made to its pro-independence and sovereigntist partners to achieve its ‘yes’ to the projectThe. Three respond to ERC demands, one to Bildu, three to the PNV and four

to that of PDeCAT. The last one belongs to Nueva Canarias and is related to tax benefits provided for in the Canarian jurisdiction and unrelated to the aid for the volcano.

The Ministry of Finance avoids using the word cuts, but admits that these amendments will be financed “with the credits of the affected departments, through the timely reallocation of credits from their respective budgets and in accordance with the prioritization criteria that said departments consider.” In other words, the affected ministries They will have to cut games to be able to pay for these new transfers because there will be no increase in credits.

This operation will be carried out with opacity because the criteria for reallocating funds will be those set by the ministries themselves, outside the scrutiny of Congress. And this lack of transparency is compounded by the lack of quantification of these amendments. Congress approved these changes without even knowing an estimate of their cost and both the Treasury and Social Security have not wanted to reveal to ABC what their amount is. The department headed by José Luis Escrivá is the most affected and maintains that its technicians have a lot of work to find the data. Sources from the negotiations between the PSOE and its partners point out that these amendments amount to “several million euros.” “Of course they are not one or two,” they stress.

One of the most important changes introduced without specific funds is the expansion of the economic benefit for the care of children with cancer or other serious illnesses, which may be charged until the patient reaches the age of 23, instead of the current 18. This arrangement was a requirement of the PNV and, according to the calculations of this group, it will benefit some 8,000 Spanish families. By the same method, and also at the request of this Basque party, the Government amended the right to reduce working hours for legal guardianship of people with disabilities and the right of public officials to leave in the case of a minor child affected by serious illnesses.

The Social Security budget will still have to be readjusted due to two other reforms introduced at the request of ERC and Bildu. They are the ones that will equate the early retirement of the Mossos d’Esquadra and the Navarre Provincial Police to the 60 years of the National Police and the Ertzaintza.

After this ministry, the treasury coffers are the following victims. The Republicans started tax benefits both for the ‘Barcelona Music Lab’ program and for the ‘Alimentaria 2022’ and ‘Hostelco 2022’ fairs, which are now considered “events of exceptional public interest”. In 2022 and until the end of 2024, the tax regime for non-profit entities and tax incentives for patronage will be applied, which will reduce State income. Specifically, the Tax on Economic Activities that corresponds to the organizers will be discounted at 95 percent, as well as all local taxes and fees. They will also benefit from deductions for advertising expenses, donations and contributions.

The list of Catalan events that will take advantage of these advantages continues thanks to the PDeCAT, which managed to include in this list the fourth edition of the ‘Barcelona Equestrian Challenge’ programme, the reconstruction of the historic indoor diving pool of the Club Natació Barcelona and the celebrations of the 200th anniversary of Paseo de Gracia and the millennium of Montserrat 2025.

Regarding these tax benefits, and given the reduction in income that they entail, Treasury defends that they have “a very limited impact”. “Its effect will be perceived in the annual statement that is presented in 2023,” excuse sources from the ministry led by María Jesús Montero. However, the deductions are generated on the taxable event of 2022 and, therefore, on the income that would correspond to this year. The expected cash from the Treasury will end up being disrupted with the exclusion of the Canary Islands from the minimum taxation of 15 percent of the Corporation Tax. This community will maintain its minimum at 4 percent at the request of Nueva Canarias.

The inclusion of these twelve amendments, which not only have an impact on the State’s revenue and expenditure account, but also do so without any quantification, contrasts with the roller that the Government applied against more than a thousand opposition amendments –most of them from PP and Ciudadanos–, to veto them alleging that they affected the public balance. The Executive used the constitutional provision provided to protect the Budgets and prevented a fifth of the registered proposals from being debated. Among them the inclusion of aid to families affected by rare diseases, tax reductions or the price of electricity or the extension of maternity and paternity leave to 24 weeks. The Government, however, included a rise of 2 percent for the salary of all its members.

The Socialists used the veto so systematically that the lawyers of the Congress ended up reprimanding them for abusing this figure. In a written report, the legal services of the Chamber estimated at 454, 42 percent of the total, the proposals of the groups censored without reason. In some cases because the Government did not substantiate its impact on the Budgets, in others because they affected administrations other than the General State Administration or because they contained compensation for the proposed expenditure. An excess that is even more disproportionate considering that, just a week later, the Sánchez government included twelve amendments without worrying about quantifying them.