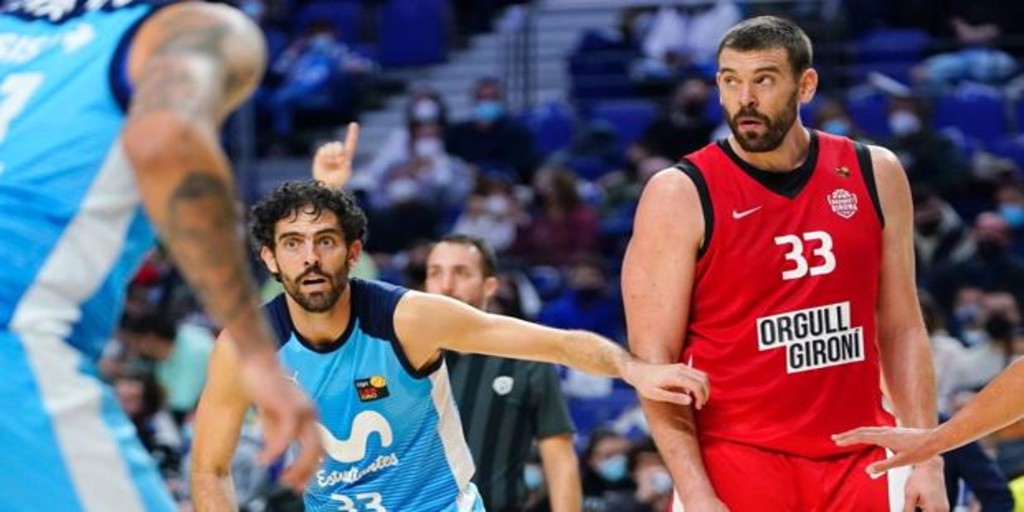 Marc Gasol at WiZink: this was the historic match between Estudiantes and Girona

An ordinary Sunday at the entrances of the WiZink Center, except because a bit of Spanish basketball history was written on the cold morning in Madrid. It was noticeable in the atmosphere, with dozens of people crowded into the lockers from very early. There was a certain nervousness, questions about where the line ended and scarves with the motto ‘Orgull gironi’. An unlikely combination in another era, but in times of unease the sport had a surprise in store that makes one get up with a smile: Marc Gasol, the Students, LEB Gold. Two emblems of the basket of our country faced in the second division and with real aspirations of promotion.

Movistar Estudiantes, the full sports and social reconstruction after a nightmarish season, received Girona Basketball, undefeated since the arrival of the legend.

Like someone who does not want the thing, Gasol acknowledged yesterday in an interview that the team’s bad start led him to accelerate his debut in the team that he also presides over. Since then, a streak of three wins, in addition to building a defense unparalleled in the category and showing off the center with tremendous statistics, more than 17 points and ten rebounds per game. Those from the capital also shine this season, counting all their home games by wins and occupying second position in the table, in addition to having among their ranks a world champion like Javier Beirán and players of caliber like Edwin Jackson and Nacho Martín.

‘Dementia’ could be read on one of the banners posted by the local fans. An apt word for the spectacle that followed when the pavilion’s loudspeakers blared the name everyone wanted to hear. Marc Gasol, with 33 on his back, received a loud ovation from the stands before becoming a rival again. The children looked for the accomplice greeting of the myth, but in their eyes only concentration was seen. Gasol’s time at Girona is not an internship. There is seriousness in his purposes, as always in his career, and a lot of basketball to waste. Less than two minutes it took him to add his first points with a smooth hook. He finished the first half with ten.

The rebirth of the students

The Students, a year ago, was absolutely defenestrated. The blizzard that buried Madrid in January 2021 destroyed its legendary training ground, La Fridge, and brought with it an outbreak of Covid that left the team without competing for several weeks. The descent, the first in history, showed that a full stop was needed. The team, however, has reconnected with the fans this season and, close to its halfway point, they are running as one of the favorites to return to the Endesa League. The baskets are shamelessly celebrated at the WiZink and the chants and whistles are the common thread of the duels. Of the rival only the virguerías of Gasol and Beiran were recognized, who admitted having rejected better offers to return home, he looks in a fantastic state, absolutely differential the forward.

However, it was Gasol who brought all the lights together. Despite being one of the best players that Spanish basketball has produced, the Catalan was close to his teammates and gave advice without virulence, guiding through the gorge like any other leader, although it is he who signs the payroll. The legs are no longer what they were but the brilliance and the claw are not lost. One of the classic inside hooks did not even touch the hoop, which even caused some timid laughter of relief in the stands. On the next play, Gasol scored a triple with the defender on top to tame the local throats.

Those who attended WiZink surely left satisfied. The duel had decibels and alternations on the scoreboard in equal parts. The third quarter was a succession of baskets suitable for another category and the outcome was a clear example that the Students feel great again. Gasol finished the duel with 23 points, the game’s top scorer, and the people from Madrid added a new notch in the form of victoria (88-80). The most fanatical of the Students even dared with some other chant against Marc, without bad intention and with the security that the already sentenced scoreboard provided them.

Two cameras followed Gasol throughout the stadium. They even ask him for Djokovic’s opinion and the vaccines at the exceptional press conference that Estudiantes set up for him. Reminiscences of what it means to have a player of his stature in Leb Oro. Gasol seemed relaxed before the battery of questions orchestrated by the media and assured that he was living exactly what he expected when he signed for Girona. “I have played four games in Spain and I love feeling the affection of the fans, both at home and away. It’s who you do this for.”