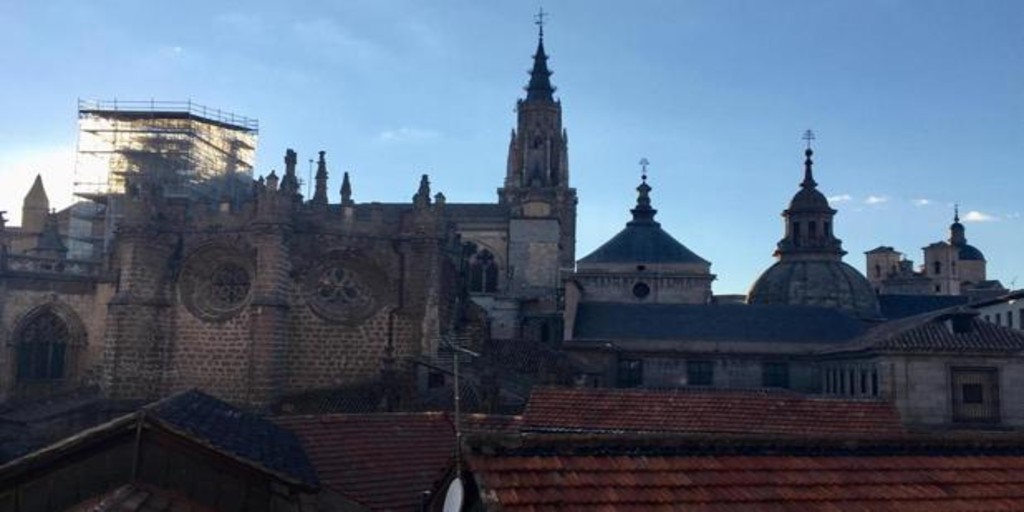 In April, the restoration of the Transparent roof of the Cathedral of Toledo will end

It is estimated that it will take about three months to complete the works that began in the last months of last year to repair the important existing deterioration in the cover of the body of lights of the Transparent of the cathedral of Toledo. Added to its already poor condition last year was the damage caused by the storm philomena, which had a special impact on Toledo and contributed to the loss of a large part of the covering material of that area of ​​the roof of the cathedral temple.

This has been confirmed to ABC from the Institute of Cultural Heritage of Spain (IPCE), from where they recalled that the Ministry of Culture and Sports, within the framework of the National Plan for Cathedrals and after the approval of the emergency works in the Council of Ministers of August 3, last year the conservation-restoration works of the architectural envelope were launched.

The intervention, promoted by the General Directorate of Fine Arts in coordination with the Cabildo de la Catedral Primada, is being carried out through the Institute of Cultural Heritage of Spain (IPCE) and has a budget of 984,035.20 euros. His execution is being carried out by the Kalam company.

The actions have an execution period of nine months, so they will last until April 2022, and focus on the exterior envelope and the wooden structure of the body of lights of the Transparent.

According to the IPCE, the intervention has required the execution of some previous documentation work that is allowing the recovery and reintegration of all the original materials that are still in good condition, according to the intervention criteria in immovable cultural heritage. These works are related to, among others, photogrammetric and planimetric surveys, 3D models, structural studies and calculations, laboratory work, characterization of materials, petrology and archaeology.

Likewise, due to the complexity of the case, a three-dimensional model has been made in which the volume and shape of the architectural element are reflected. On this model, each one of the pieces is registered, which should facilitate its exact relocation or replacement.

However, these works are part of the comprehensive restoration project of the Transparent, so that the intervention remains inside the cathedral. In this regard, the dean, Juan Pedro Sánchez Gamero, informed ABC that “there is no news or information” regarding this second phase, which must be addressed from the Ministry.

On the other hand, the dean indicated that the cathedral itself is going to start repairing the leaks caused by the destruction of the snow from the Filomena storm, in addition to the problems generated by the droppings of the pigeons. In this case, these arrangements will be borne by the cathedral’s own funds.