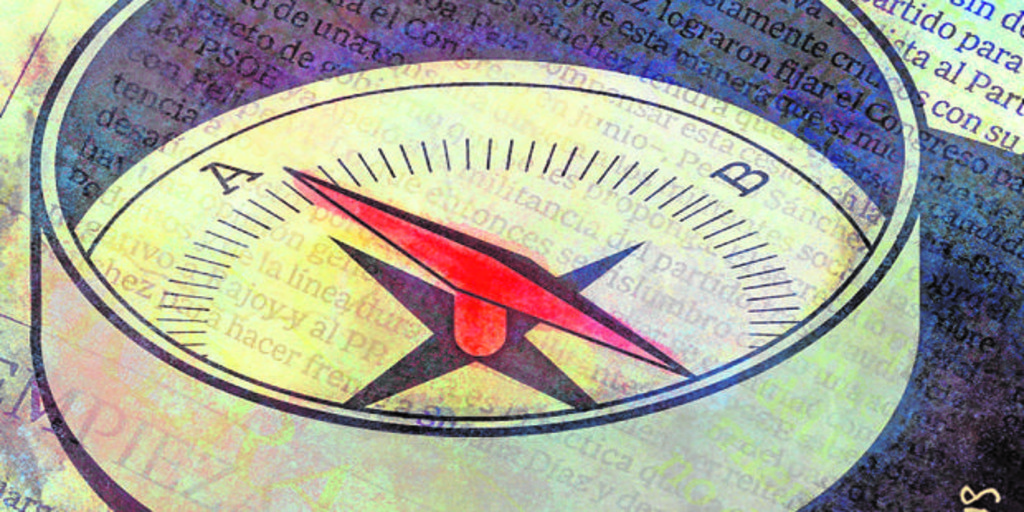 I have been a reader of newspapers since I entered the Faculty of Law of Salamanca, which means that I have been reading them for more than half a century, and if there is something that I find admirable in the profession of journalism, it is independence. So much so that one of the film characters that always captivated me is that of Dutton Peabody, that journalist from ‘The Man Who Shot Liberty Valance’ (1962) whose newspaper ‘Shibone Star’ is destroyed by some outlaws and given a tremendous beating for publishing what they really were. Almost dying, Peabody still has the strength to say to those who came to his aid: “I have explained to that Liberty Valance what freedom of the press is!”

Before, with not a little whiskey on him, he had addressed the people in the canteen with this harangue: “Good people of Shinbone! I, I am your conscience, I am the little voice that echoes in the night, I am your guard dog that howls before the wolves, I am your confessor! I… I am… what else am I? In reality, Dutton Peabody was the newspaper’s founder, owner, editor, and sweeper.

From first-hand testimonies, I know that the joys of the journalist when he writes or speaks in freedom are endless. Hence, it is very difficult for me to accept that there are unscrupulous individuals in the guild, although there are those who think otherwise. Without going too far, Indro Montanelli who, with his great talent and from the wisdom of the 90 years, shortly before his death criticized the rich and powerful journalism professionals “for being traitors to a job that should not lead to power or to wealth.” I do not know if the diagnosis is accurate, but it is a proven fact that Montanelli loved his profession infinitely and that he suffered when he saw the behavior of some of his colleagues and the reason for their spurious actions. According to him, there is no law that forces a journalist to depend on anyone, but it is as certain as this that in the world of politics it has come to be thought, in various stages, that journalism can be reduced to silence, to as well as buying and selling, involving him in amoral gossip or shenanigans and even putting a ghost sheet on him and treating him as a puppet.

Lord MacGregor of Durris, who was chairman of the Press Complaints Commission, successor to the Press Council, put it very well in an article entitled ‘Press and Accountability in Democracies’ in which, to this end, he recounted the response The journalist Sydney Jacobson gave Winston Churchill when, speaking of his relations with the press and saying that «what cannot be eliminated is fixed and what cannot be fixed is eliminated», he replied that «the relations between the Government and the Press have deteriorated, continue to deteriorate and under no pretext should they be allowed to improve.

And he also said it, although with the natural protocol style, King Felipe VI at the honor dinner for the winners of the Mariano de Cavia, Luca de Tena and Mingote awards held at the Casa de ABC on July 22, 2020, at affirm that «journalism is the tenacity of those who always ask themselves, as a moral obligation, the why of things in order to, so to speak, settle their debt with current affairs, handing it over to the reader», to which I, more modestly, I would add that the good journalist should not -cannot- put his weapons at the service of those who set themselves up as owners of the news. It is not a matter of going into details, but those who fall into the fantasy that public opinion is better controlled by neutralizing the annoying press, what deep down they want is to embody an oppressive government in which the governed are not citizens but members of a community submissive to their designs of power.

I recognize that my vision of the State at this point may be pessimistic and even old-fashioned, never squinting, but I think that a government that is not constantly monitored tends towards tyranny. An independent press is the most powerful form of control, thanks to the promotion of transparency. Bear in mind that freedom of expression is not only shaped by its functional dimension and hence its intimate connection with other constitutional rights, such as business freedom or free professional exercise, but also is closely linked to political pluralism. , higher value of our legal system, as proclaimed in article 1 of our Constitution.

“The press must serve the governed, not the rulers. Only a free and unfettered press can denounce, in an effective way, the deceptions of the Government (…)». That is how Judge Hugo Lafallette Black, a member of the Supreme Court of the United States from 1937 to 1971, sentenced him. with a government and without newspapers and a country with newspapers but without a government, I prefer the latter». The phrase, which was part of the thought of a politician open to discrepancy, adverse opinions and criticism, may well be completed with this other: «The Press is the best instrument to instruct the mind of man, and to improve it as a human being. rational, moral and social.

There is no doubt, then. Being a good journalist is fulfilling the role that the profession implies, not administering the truth according to the conveniences or pressures of power, not mixing personal opinions or interests with those of the readers, not acting as judges of other people’s conduct and even less as prosecutors. You have to have courage to defend the news and do it without wanting to invade strange orbits. When the journalist tries to supplant the politician, he ends up falsifying reality, as happens when the politician feels like a journalist, who becomes a despot. These are the authentic voluntary servitudes that not only identify journalism as a profession, but also commit those who exercise it. Respect for the truth that involves telling the facts as they happened or, at least making an effort to do so, should be the compass of every journalist who aspires to carry out their work with dignity and not be worthy of that reprimand that Graham Green directed at Antony Burgues: “Are you misinformed or do you suffer from the clumsy disease of dramatizing events to the detriment of the truth?”

Anyway. Today, the important thing is to record the pleasure that the reader of a newspaper, like the listener of a radio station or the viewer of a television news, is produced by verifying that the journalist is loyal to himself and his recipients. . For good journalism, freedom of expression and freedom to inform are not dogmas of faith, but tangible notions that can be seen, heard, smelled, touched and tasted. I am reminded of the solemn statement that the director of ‘The New York Times’, AM Rosental, made to his readers: «The newspaper is not mine, nor the shareholders, but yours, your thirst for information, your judgment and your ethics.

In case any reader deems it necessary, I declare that when writing these paragraphs only convictions have weighed on my mind. However, I admit that in this matter, just as or more than in others, the ideas put forward are vulnerable. That is why, to defend them, I say that “ethics must accompany the journalist like the buzzing of the blowfly.” I clarify that these words are from Gabriel García Márquez. He wrote them at the end of 1996 in a lucid and beautiful article on journalism, according to him, “the best job in the world.”