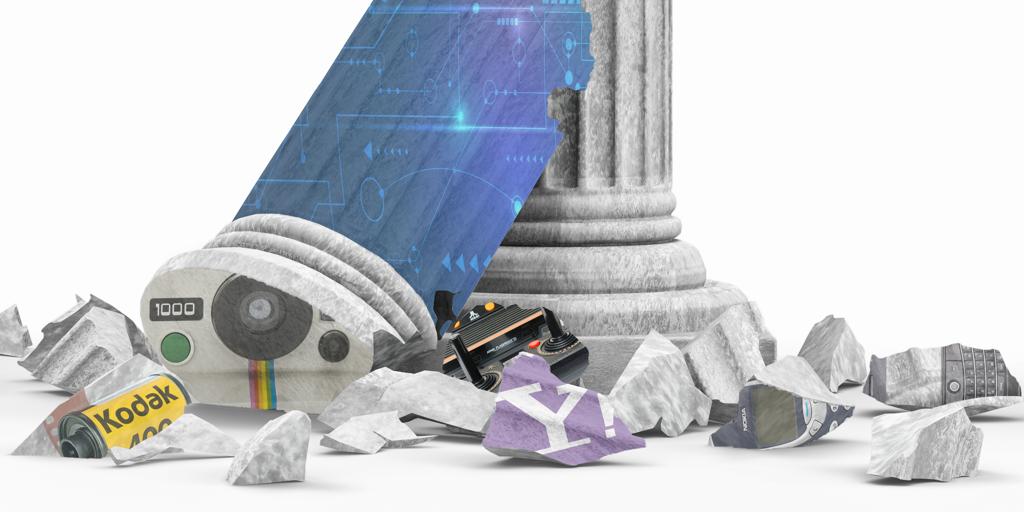 The decisions that bring down the tallest tech towers

Even the strongest business empires can collapse like a house of cards if they make the mistake of complacency, underestimating competitors, or ignoring evolving consumer preferences. In a highly dynamic environment in which innovation is the order of the day, not even the seemingly immortal technological giants can lower their guard because the price to pay is too high. There is, among others, the case of Nokia. The Finnish manufacturer led the thriving mobile phone industry for 14 years until Samsung unseated him from his throne in the first quarter of 2012. Google, with its Android operating system, and Apple, with its respective

IOS and iPhone, did the rest.

The emergence of these actors did not sit well with BlackBerry either. The Canadian firm, which had carved out a niche for itself in the corporate world to later succeed among young people, experienced its heyday at the end of the 2000s, but has since entered a free fall culminating in the announcement that its devices They would stop working as of January 4.

Javier Vello, partner in charge of EY Transforma, explains that the problem with these companies is that they leveraged the entire strategy on their asset and they did not see the disruptions that were altering user needs: “They looked at their current competition, but they lost sight of what innovations new competitors could bring to the market.” And it is that, in the digital economy, the rules of the game change at a devilish pace and adapting to them is the key to survival. Enrique Dans, Professor of Innovation at IE University, warns of danger for organizations not paying attention to change. “When the rest of the world evolves and you don’t, you remain an obsolete concept,” he says.

Neither Nokia nor BlackBerry detected that the iPhone redefined the idea of ​​a mobile phone. «It became a computer that we carry in our pocket whose main function was not to call, but to use it for many other things. If you are unable to adapt, you become a residual product in a very short time», points out the expert, who emphasizes that the technological world requires a very intense surveillance of what is happening around. Not carrying it out can lead to giants as it was in its day Yahoo! to utter irrelevance.

The American firm had the kingdom of the internet at its feet, but at the dawn of 2000, an emerging Google entered the scene with fresh ideas that soon eclipsed its proposal. “Yahoo! I wanted Internet users to put their home page and read the news there, use email… in short, not to leave. Google changes the way of browsing and completely moves away from the philosophy of the portal. His concept was much more efficient and gave better results», summarizes Dans. Yahoo! it remained anchored in its classic approach and, with it, began the path to oblivion.

Terra, which came to be listed above companies with a long history such as Repsol or BBVA, experienced something similar. “He tried to preserve a portal philosophy that became obsolete for the benefit of an increasingly open internet», details. The expert also mentions the case of America Online, another closed internet concept that ended up being used by the public that did not know much about the internet.

Another failure that invites reflection is that of Myspace, the fashionable social network at the beginning of the century. Its meteoric rise led the media giant News Corporation, controlled by Rupert Murdoch, to take notice of the company and acquire it in 2005 for $580 million. However, its value plummeted as a result of the notoriety achieved by Facebook and the tycoon sold it six years later at a bargain price (35 million), recognizing that the operation was a blunder. “A traditional business figure is not capable of managing a company with a different way of doing things, which was joined by the arrival of Facebook,” says Dans.

The mammoth corporations that have dominated the market can find it difficult to recognize that their future is far from bright. «Many times there are companies that deceive themselves, that is to say, they do not want to see that they have to modify things”, he emphasizes Pedro Nueno, IESE professor. This is what happened to Kodak, trapped in analog photography, in the face of the proliferation of increasingly cheap and manageable digital cameras. The clouds hung over the company until in 2012 it declared bankruptcy. The same fate befell Polaroid, another classic in the sector, which faced several bankruptcies. «Digitalization turned photographs into zeros and ones, so that their industry was finished from one year to the next. Sometimes, the arrogance of great executives to think that everything they have done well will continue to guarantee success leads them to be blind to their surroundings”, interprets Javier Rodriguez Zapatero, the president of ISDI.

To avoid these types of situations, Nueno believes that it is important for company presidents to leave pride behind so that their team dares to speak frankly to them. «To avoid self-deception, you have to be humble, listen to people and, together, see how problems can be solved”, he says.

Another way to avoid failure is analyze market trends well. “The world leaders in the manufacture of components for automobiles, for example, are already exploring the world of electrics. It is not known if the cars will continue to be fuel-powered or will become electric, but manufacturers must consider all alternatives and monitor consumers closely. If they see that they are leaning towards an option, they have to quickly focus on it, ”explains the teacher.

Just as important is operating with clear company accounts. “A very profound change is taking place in corporate governance, there is interest and there are more and more laws that encourage us to rationalize things. In 2008 we saw a number of companies that had taken on debt, suddenly the economy worsened and they couldn’t repay the debt,” he recalls.

At a time like the present, in which innovations follow each other at great speed, survival also depends on two factors, as Nueno explains: “Digitization is a phenomenon that requires manage the available information well, which is a lot, and be quick in making decisions». Taking into account the war for talent that has been declared between companies, retaining the most outstanding workers is a plus for any firm that aspires to defend its leadership position: “People love that the company makes interesting training courses because it leads them to think that they are improving as professionals in the sector. If a company does a lot of training, they will want to go to that company, sometimes even charging less. That is why not even the ‘big tech’ that have amassed enormous power can be trusted.

Staying on top requires a combination of a number of ingredients. “Humility to think that success is not guaranteed if we do not constantly interpret the environment and curiosity like that of children to always be asking ourselves,” says Rodríguez Zapatero, from ISDI. And add a third component: «Be aware that if you do not compete yourself, others will compete. Sometimes it is more desirable that you kill something that is in your own house before others do. It is what guides the biggest technology companies today. And the proof is that the great founders are already handing over to others”, he indicates. It should be remembered that last year Jeff Bezos ceded his position as CEO of Amazon to Andy Jassy, ​​until then head of Amazon Web Services. Earlier, in December 2019, Larry Page and Sergey Brin, co-founders of Google and respectively CEO and Chairman of Alphabet, handed over their positions to Sundar Pichai, CEO of Google.

“Every so often you have to stop and think,” says Javier Vello, from EY Transforma. Your advice is mentally put the company into three ‘boxes’. «A ‘box’ would serve to build, that is, what today gives gasoline to continue; another ‘box’ from the past with items that are profitable but will disappear or generate unwanted leverage, so they will have to be removed; and a third ‘box’ of the future with things that, without knowing if they will work or not, I should invest in». Vello draws a parallel: «It is like a ship, which cannot suddenly change course. It adapts to the wind and the sea and turns to gradually go in the right direction, but always being aware of which one it is». Lessons learned from the harshest setbacks suffered by technology companies that went from eating the world to sailing adrift.

The search for an extra life

IBM was a benchmark in the manufacture of business computers and sold millions of personal computers, although in 2004 it got rid of this division and focused on the information technology services and consulting. «Sometimes you have to abandon the ‘core business’ and do different things. Reinventing yourself from scratch may be the only solution and you must be able to consider it”, highlights Javier Rodríguez Zapatero (ISDI). BlackBerry has also turned its course, from devices to cybersecurity and the Internet of things. «It was the best way to value their patents. Its origins in the corporate world allowed it to generate very good security protocols”, says Enrique Dans (IE University). Now, remember that it has gone from being “a huge company that contributed money to the area where it was to be a tiny company with very few possibilities.”