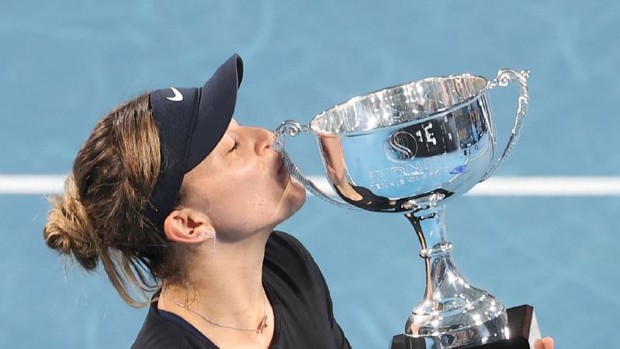 the spanish tennis player Paula Badosa has conquered this Saturday the tournament of
Sydney (Australia), WTA 500 category and preparation for the Australian Open, after beating the Czech Barbora Krejcikova (6-3, 4-6 and 7-6 (4)), number four in the world, in the final, for which she adds her first title of the year and the third of his career.

In a balanced match that was resolved in the ‘tie-break’, the Catalan, current number nine in the world, knew how to suffer and remain calm to remain undefeated against the Central European player, who took her to the third and final set.

Two hours and 22 minutes after the start of the contest, Badosa certified his full in finals of the WTA circuit -three of three- to raise his third wound, after those achieved in 2021 in Belgrade -WTA 250- and in Indian Wells -WTA 1000-.

With this, it is guaranteed to rise this Monday to the best ranking of her career, sixth, so she will attend the oceanic ‘Grand Slam’ as one of the main favorites.

Although the duel started with a break, the Spanish saw how Krejcikova returned it to her in the fourth game. Thus, he armed himself with strength to win the last four games and try to finish off his victory in the second round. However, he gave up his first serve, and despite the fact that he also managed to endorse a ‘break’ to the Czech, he said goodbye to the partial with a new break from his opponent.

Everything had to be decided in a close last set that went to sudden death after both exchanged breaks. In it, Badosa started from behind, but he knew how to recover to regain the initiative –finished with twelve aces– and confirm, at the second match point, her third victory in three matches against Krejcikova -after the first round of the Mutua Madrid Open (6-1, 7-5) and the round of 16 at Indian Wells (6-1, 7- 5)- and the third career title.

“Both of us have pushed ourselves to the limit, that’s why it’s not easy to lose a game like this. It is an honor to see how Barbora grows as a tennis player and to play against her,” said Badosa in the winner’s speech. The Spanish is measured next Monday with the local player Ajla Tomljanovic in the first round of the Australian Open.