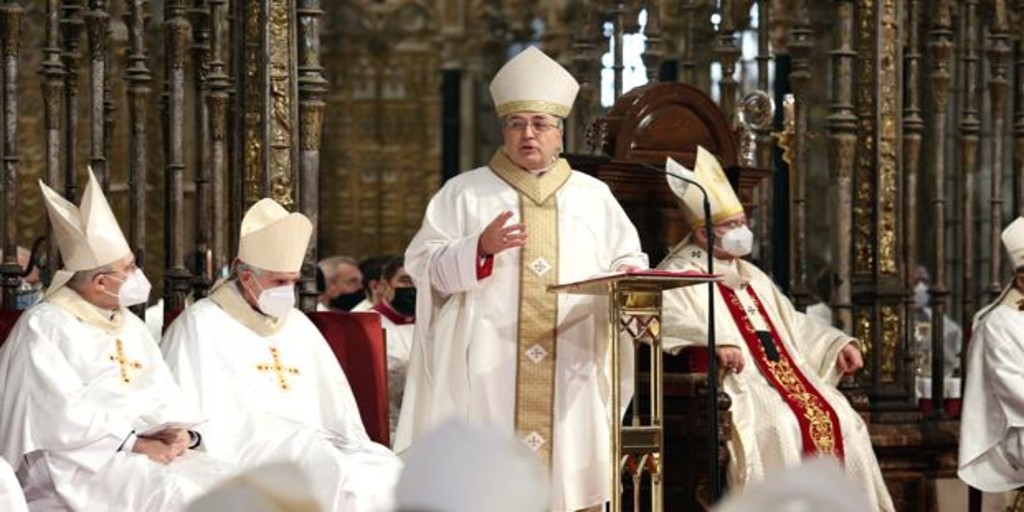 The cathedral of Toledo, primacy of Spain, has lived this Saturday one of those acts in which its greatness rises even more on the occasion of the ordination of Francisco César García Magán as the new auxiliary bishop of Toledo.

All the pageantry and solemnity of this type of religious event was experienced in all its splendor, with the presence in the long ceremony of two and a half hours, presided over by the Archbishop of Toledo, Francisco Cerro, of five cardinals, seven archbishops, 18 bishops and dozens of priests, in addition to numerous local and regional authorities, headed by the president of Castilla-La Mancha, Emiliano García-Page, and the mayor, Milagros Tolón, as well as by the Minister of Foreign Affairs, José Manuel Albares Bueno.

During the homily he presided over, the Archbishop of Toledo, Francisco Cerro Chaves, reviewed the keys of this ministerial act, in the image of the questions that Jesus asked Peter, and reminded the new auxiliary bishop that the Archdiocese “is not worth it, it deserves life.”

In the final words that he addressed to those present at the holy mass of his episcopal ordination, the new auxiliary bishop showed his “deep gratitude” both to Jesus Christ, who has called him to the ministry as “a new vocation within the call that I had already become a priest” to “preach the good news of his message”.

“I am aware that the only thing I can contribute is just five loaves, but I am certain that the Lord will be able to perform a new miracle of multiplication with them,” he said, assuring that his new vocation is «pastoral service, ministerial dedication, to lead you to the master».

In his extensive acknowledgments he has recalled the teachings since he was a young seminarian 40 years ago of who today is the Archbishop Primate, Francisco Cerro. «You have my hands to put them next to yours to continue breaking this field of the Lord, my back to help you carry the weight of the crosses that the Lord sends». “Count on me for everything and at all times,” he said.

Likewise, he thanked the presence of the apostolic nuncio in Spain, Bernardito Cleopas Auza, to whom he He has asked that he transmit to Pope Francis his “deepest communion” and his “loyal obedience”; that of the archbishop emeritus of Toledo, Braulio Rodríguez, for “his trust”, and that of the former archbishop of Toledo and current archbishop of Valencia, Cardinal Antonio Cañizares, for “his welcome”.

The new auxiliary bishop has remembered his closest family – his sister, brother-in-law and nephew-; to the priests and vicars, to the consecrated religious and to the laity, to whom it has been offered “without any reservation”. The civil and military authorities have been urged, from the respect and autonomy of each area, to promote collaborative relationships; and to the sick, the elderly, those in material or spiritual need, those who are alone or marginalized, he has offered a “special place” in his heart as a shepherd.

For the representatives of the different institutions had “a greeting full of respect and closeness to all national, regional, provincial and local civil and military authorities. Your presence at this celebration is a sign of the democratic normality of cooperative relations that we must all promote, from the respect and autonomy of each area, for the common good and the service that we all wish to offer to the men and women of our society. ».

From the point of view of the current social context, the new auxiliary bishop of Toledo has pointed out that “I have been appointed bishop, like other brothers who are here, in the midst of this pandemic caused by Covid that is shaking all of humanity, like a sign of globalization, in this case negative. What should we answer as bishops? I humbly believe that our mission should be to announce hope to all men and women, to proclaim the full meaning of their lives, try to illuminate the mysteries of illness and death, and for all this we have the message that we have received by apostolic succession; we are witnesses of the Risen One and from his light we have to illuminate every night and the nonsense of the lives of men and women».

And he added that “as for the ecclesial context, I begin my episcopal service at a time of synodal preparation in the whole of the Universal Church and, in the medium term, also in our archdiocese. This means that we all have to become aware of the communal nature of the Church, which is neither an assemblyism nor a mere sociologism, but rather It is about promoting and living the polyhedral reality of the Church in the diversity of its ministries, services and vocations., how diverse are the shapes and colors of the stained glass windows of our cathedral. Catholicity is not uniformity but variety in communion and in Christian brotherhood».