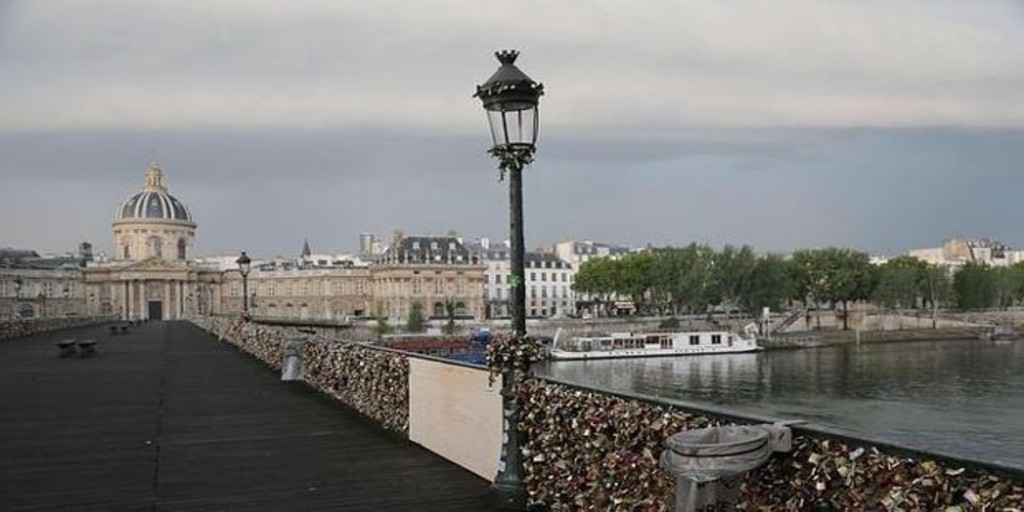 I also followed the same route as Horacio Oliveira when he walked down the rue de Seine and the quai de Conti to meet La Maga at the Pont des Arts. It is not art that imitates reality but reality that imitates art. He did not know in the winter of 1975 that, when he looked at the cold waters of the river, he reproduced the same gesture as that of the two lovers in ‘Hopscotch’, Cortázar’s novel, published in 1963.

A few years ago, it became fashionable for lovers to leave padlocks on the railings of the bridge. But then there was no such custom. Few remember since it was closed at the end of the 70s

and that had to be rebuilt after a barge collided with one of its pillars.

Apart from the memories it evokes, I have always loved the Pont des Arts because it is the place from where you can see the Louvre, the Academy, the Ile de la Cité and the limits of the Latin Quarter. Everything is just a few steps away, the heart of Paris at your fingertips.

“The gods have let me fall, the angels spit on me from above, it’s raining on the Pont des Arts,” says an old song. It’s true. The bridge is the place of impossible loves, of broken dreams, of the light of ash and olive trees that floats over the river, as Cortázar writes on the first page of ‘Hopscotch’.

I too experienced the same uprooting and helplessness that Oliveira did in the Paris of the 1970s, which attracted me like the glare of light to a butterfly. I lived a hundred meters from Sartre, I took the metro in Saint-Sulpice to study in Vincennes, I spent hours reading in the Luxembourg gardens and my home was bookstores like Shakespeare and Company on rue de la Bûcherie or La Joie de Lire, near Saint-Michel, which Vargas Llosa also frequented and whose name he had come to forget.

We will always have that Paris recalled and reinvented by Hemingway when he went to live with his first wife in the 1920s in Plaça de la Contrescarpe and alternated with Ezra Pound, James Joyce, Gertrude Stein and Scott Fitzgerald, who was already an established writer. .

Actually, Paris has never existed. Only in our imagination, in dreams, in Prévert’s poems, in Edith Piaf’s songs, in Marcel Carné’s films. Like Proust’s Albertina, the city is a woman with a dark past who slips away when we try to catch her.

The Pont des Arts is as unreal as the pages of Cortázar in which you slip as if in a dream and get into the skin of some characters that are confused with your own life. Yes, Paris was a party, although in those years we didn’t know it because happiness is as ephemeral as the moment in which Oliveira’s insides shook when he saw La Maga leaning on the bridge.