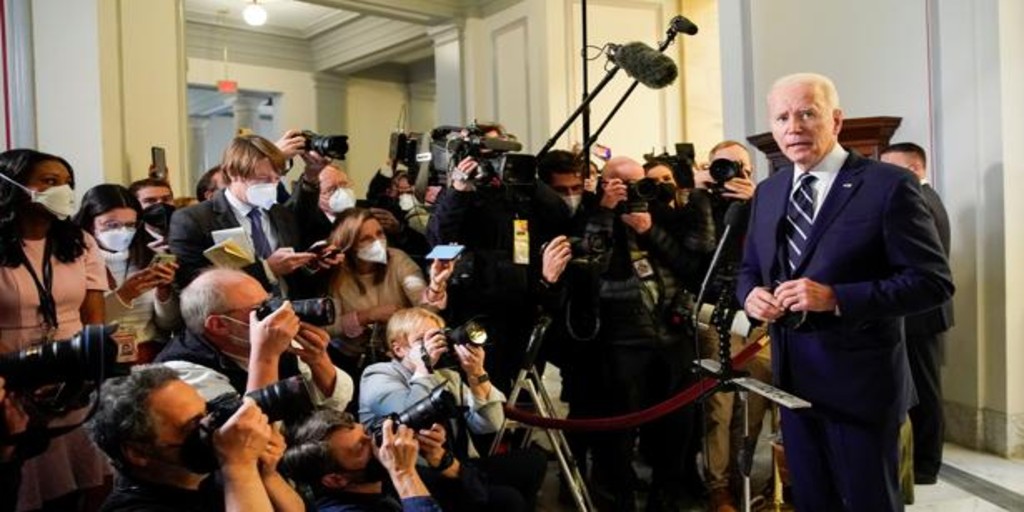 Biden, in low hours: his voting laws and the mandatory vaccine fail

If there’s a time for Joe Biden cross the Rubicon of his mandate, this is certainly it. The 46th president of the United States has not had a worse week than this one, and it is very unlikely that the newspaper library will reveal weeks as disastrous for a modern presidency as the second of 2022. Perhaps we have to go back to the times of Jimmy Carter and the onerous stagflation, with rationing and lines at gas stations and the president personally controlling the heating in the White House to set an example of how to save. Biden has added loss after loss from Monday to Friday, and, in need of decisive steps, sinks in the polls at a

dizzying speed just 10 months before the partial elections in which control of the Capitol is at stake.

On Tuesday, the president went to Georgia, a highly contested state between Democrats and Republicans and one of the epicenters of the campaign of false allegations of electoral fraud of Donald Trump. There Biden gave a speech with which he wanted recover the political pulse, set the agenda, force his party to approve a federal reform of the voting laws to prevent a Republican offensive that will end up making it more difficult to vote, with greater restrictions and filters. Enraged, Biden raised his voice: “Will we choose democracy over autocracy, light over shadows, justice over injustice? I know which side I’m on. I will not give up. I will not move. I will defend the right to vote, I will defend our democracy against enemies, outside and also inside our country.

Within 48 hours his plans had died. In a desperate attempt, the president Thursday night invited the two centrist senators, Joe Manchin and Kristen Sinema, to the White House for a private meeting in which he urged them to get on the car of that electoral reform. It needs them, because Democrats have 51 votes out of 101 in the Senate, and passing laws usually requires a 60-vote supermajority, a consensus safeguard, and bipartisanship. Only if those two senators give in and agree to change the rules of the game in the Senate, so that a simple majority is valid, could Biden’s agenda, in terms of elections and other sections, prosper. The two senators, as they usually do, listened attentively but gave indications that they are not in the business of blowing up the consensus.

The blow of the Supreme

Thursday was a night of anguish at the White House. Moments before the refusal of the two Democratic senators, the Supreme Court had invalidated one of Biden’s most aggressive measures against the pandemic: the obligation for companies with more than 100 employees to ensure that they are vaccinated. This November mandate, which was going to affect 84 million workers, is unconstitutional, according to the conservative majority of the Supreme Court, because it does not have the prior approval of the legislature, that is, the Capitol.

It is true that the highest court did maintain the mandate that hospitals and medical centers that receive public funds require their staff to be vaccinated, something that will affect 17 million health workers. But it was nothing more than a consolation prize just as coronavirus infections skyrocketed to unprecedented levels.

Biden campaigned with a policy radically different from that of Trump regarding the virus, prioritizing medical criteria, generalizing the administration of vaccines and promising to fully reopen the country last summer. Instead, infections have soared this week to 1.35 million, the most since the pandemic began. And although the Omicron variant is not as aggressive as the previous ones, hospitalizations for coronavirus have also set a record this week: more than 145,000. The evolution of the pandemic has surprised the White House with the step changed, without sufficient diagnostic tests and even lack of new treatments developed by pharmaceutical companies.

What’s more, Biden, despite his fiery defense of vaccines and science, has not been able to convince the entire nation of how necessary they are. For one reason or another, there are about 100 million people in the US who could have both doses, because they are over the age of five, and have not. index total vaccination is only 63%, compared to 80% in Spain.

The explosive combination of the pandemic, with a massive wave of casualties, and a series of storms has also caused a unprecedented shortage in American supermarkets. In big cities there are empty shelves, and many families are unable to find basic products such as eggs, milk or apples. Those images, for many Americans inappropriate for their country, have taken over hours and hours of newscasts and covers in the main newspapers of the nation, dealing a severe blow to Biden.

It has certainly not been a dish of good taste for the president that, in addition, inflation has shot up to its maximum since 1982. The figures of the federal government itself, released on Wednesday, reveal that in one year, prices have risen on average by 7%. And there are categories that infuriate consumers, the opposition and the president’s own party. Buying a second-hand car is 51% more expensive today than in 2019. Gasoline rose by 27% in 2021. Meat and fish, 18%. Rents, 6%. Cornered by the figures, Biden had no choice but to admit in a statement that “he still has a lot to do.”

The issue is whether voters will give him the chance to do much more. His popularity has plummeted. According to the Quinnipiac University survey, only 33% of those surveyed approve of his management. The White House defends itself by alleging that this survey usually gives them worse grades than the rest, and affirms that the average of the president’s popularity polls gives him 43%, which is not a flattering figure either, certainly on par with the worst moments of the Trump presidency.