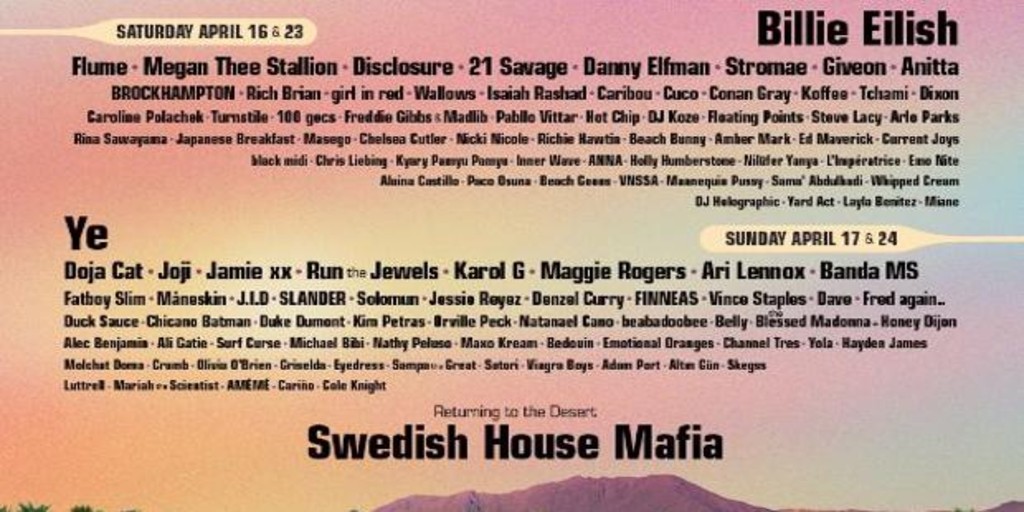 The fourth time is the charm and 2022 is confirmed as the year of the true return to normality. This Thursday, Coachella announced that, after a two-year hiatus due to the pandemic, it will return its activity with a poster headed by Harry Styles, Billie Eilish and Kanye West. This edition will take place from April 15 to 17 and from April 22 to 24.

Presale for Weekend 2 starts Friday 1/14 at 10am PT. Weekend 1 is sold out. Register now at https://t.co/qujCsdCWkppic.twitter.com/cEp5iNJY9M

Aside from the stars mentioned, the festival in Indio (California) will also feature Swedish House Mafia, Phoebe Bridgers, Stromae, Doja Cat, Danny Elfman, Fatboy Slim, Karol G, Ed Maverick or Nathy Peluso, among many others. In addition, it should be mentioned that the Spanish Cariño and Paco Osuna make up the Spanish quota.

The festival was postponed to the autumn of that year, but the pandemic meant that it could not be held then or in 2021. Thus, three consecutive cancellations of the one considered kilometer zero of the music festival season, as it kicks off the macro events .

Now, the percentages of vaccination against the virus are much higher in the United States, although the omicron variant has caused the number of infections to grow exponentially. However, from the organization of the event they bet on being able to guarantee all sanitary measures.

Coachella, which each year used to concentrate half a million people in the California desert, had announced for that 2020 edition the performances of Travis Scott, Frank Ocean and Rage Against The Machine. It is easy to see how the poster has changed, where our Spanish representatives, Cariño, have remained.