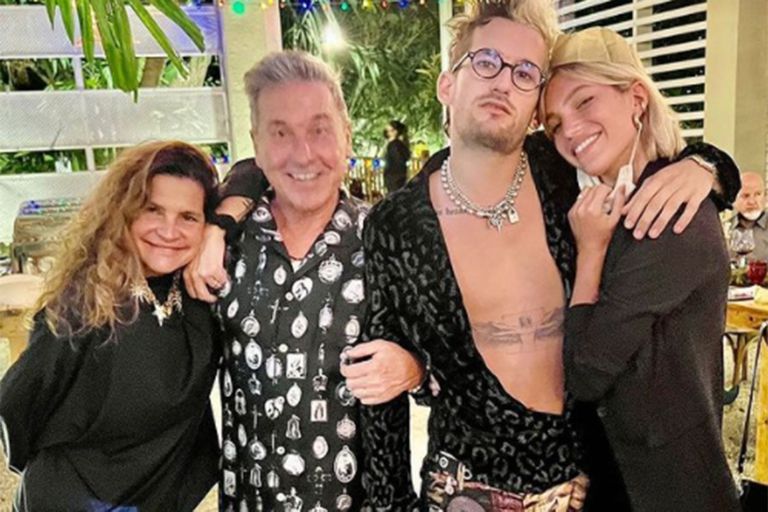 Hours before the wedding festivities between Ricky Montaner and Stefi Roitman began, Ricardo Montaner, the groom’s father, He took to social networks to tell his followers how the family was going through this special moment. However, his message ended up awakening a controversial unthinkable.

“Hours of anxiety and emotion of those that escape tears. Long live life! Family days, hermetically sealed so as not to let a sigh escape without dedicating it first. Ricky and Stef are the reason for this family gathering from different corners of the world. Family, friends who are family. God in perfect control and Marlene taking care of every detail of the assembly, making sure that everything has excellence so that God is pleased. Last son Montaner and first daughter Roidman marry [Sic]. As my son Héctor said, ‘the Watsapp group is closed, nobody leaves, nobody enters,’ “he wrote on his Twitter account.

In his happy message, the author of “Cachita” not only made a mistake when he wrote the surname of his daughter-in-law but also confirmed two of the events that caused a stir, amid the thick secrecy prior to the wedding. The first, that the couple had no interference in the organization, but everything was left in the hands of Ricky’s mother and Montaner’s second wife, Marlene. The second: that despite having lived with them during the first stage of the pandemic in Miami and being committed to their youngest son, Roitman was not included in the family clan chat.

Last November, in an interview with I Want Music, Ricky Montaner revealed that the model had not been included in the Montaner family chat and the reason he explained was the same why even the 24-year-old Argentine was not considered part of the clan. “Stefi is not here yet, she will be when we get married. Camilo entered when he married Evaluna ”, he pointed out.

On January 4, Montanter Sr. had also shared on the networks a photo in which he was seen on a plane: “Ricky, the single remaining man, is getting married. Here I am going to witness his pact with Stef, the wonderful woman that God had chosen for him from before he was born. A marriage is more than that, when you get married, you agree forever”.

The singer from Avellaneda had already thanked God for Roitman’s arrival in his family with another controversial message. After the model announced her engagement with Ricky on Instagram, the interpreter of “So in love” commented: “You make me very happy, making my son happy. I love you and I will witness the happiness that you both deserve. Having a Jewish daughter-in-law is a gift from God ”. His words traveled the networks and there were some users who questioned the way in which he mentioned Roitman’s religion.

Montaner father, who in addition to Ricky, Mau and Evaluna – a product of his relationship with Marlene Rodríguez Miranda – is also the father of Alejandro and Héctor, the result of his marriage to his first wife, Ana Vaz, he had already made it clear that until it passed by civil registry, Roitman was not going to be considered of the clan. In the middle of last year, in the middle of an interview. The outburst occurred when the artist said that “his son-in-law Camilo and his daughters-in-law, Sara, Paola and Jimena, are part of his family.” Upon hearing it, the host of the program wanted to know: “And Stef …?” But, to his surprise, he had not forgotten about the model, but justified: “Stef is not married yet. When they get married in January there it will be in the family. From January … She knows ”.

Ricky and Stefi met in 2019 through social media. She traveled to Miami to meet him and, due to the Covid-19 pandemic, ended up staying there with him and the rest of the Montaners. In October of last year they announced their commitment and this Saturday the celebration takes place, for 400 people, in an exclusive ranch in the northwest of the province of Buenos Aires.