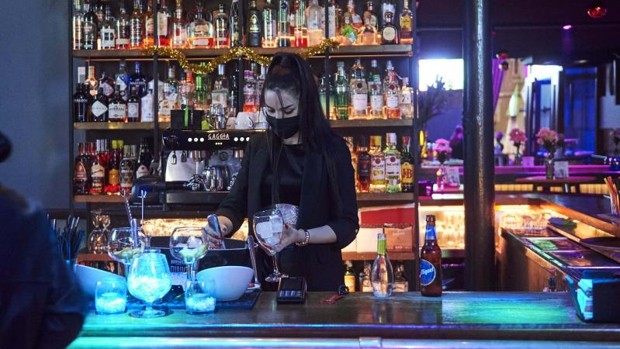 They sure have noticed. They look at the chair next to them and the partner is missing. Or they go to their usual pharmacy or bar, and the usual person who dispensed the medicine or coffee is not there. That, in the event that you are not one of the almost 1.2 million people who in the last two weeks have contracted Covid in Spain. 646,715 people in the last seven days.

Ómicron has literally swept the templates. It is what is communicated by employers, small and medium-sized companies and essential services. The Social Security put figures on this cascade of casualties last Tuesday: only until December 23, 240,011 discharges due to disability were processed

Since Ómicron’s irruption, reported for the first time in Spain on November 29, the pandemic entered a new scenario. If in October the number of casualties due to temporary disability due to the coronavirus marked the lowest figure of the entire health emergency, the emergence of cases as a consequence of its greater transmissibility and its faster clinical prognosis has completely reversed the data, and ended 2021 with data similar to those of July, according to the same report from the Ministry of Inclusion, Social Security and Migrations.

From this Ministry they insist that the data is similar to that of other waves, but due to the vaccination the duration of this inactivity has been significantly shortened. Thus, in December the average extension it has been 9.96 days, compared to 12.6 the previous month or 20 granted in August 2020, when the second wave of the pandemic began and staff were not vaccinated.

AMAT sources speak that the spike in infections has resulted in a “true tsunami of sick leave” and that at the end of December there were more than 340,000 sick leave processes in force, some 40,000 more than in the worst moments of the health crisis in March and April 2020.

From sectors such as the hospitality industry in Madrid, they assure that the coronavirus has further reduced small and medium-sized companies. There are dozens of particular businesses that are in the picture. There are even relatives replacing the owner behind the bar, or behind the stationery, distributing agreed deliveries. The fear is now of a much steeper January slope for Ómiron, which still has days of peak, than for the deteriorating economy. From the Business Federation in Toledo they provide a striking description: “There is normality in the workforce within absolute chaos.”

Ómicron has swept equally in all essential sectors. Out of a staff of 80,000 Civil Guard agents (active and in reserve with destination), right now there are 3,600 infected, reports the Armed Institute. Union sources also figure that the rate of National Police officers affected by the South African variant is high, triple that of citizens due to their exposure to the virus, they add.

In the transport sector, Spain does not suffer from the condition that has worsened in other countries, since all services have contingency plans designed for these serious incidents and also because, as in the case of Metro de Madrid, Christmas is a period (as well as the summer) in which the calendars are adjusted so that no service fails. Union sources report that, for example in the capital’s subway, there are a hundred train drivers who have reported the temporary leave due to the coronavirus disease. The same has not happened in the Bilbao Metro, where it is not easy to find substitute drivers with the necessary qualifications. In the workforce they are trying to readjust the shifts and it is on the table to ask for volunteers to suspend vacations and payments and guarantee the service.

Renfe sources put 14 services that were affected just yesterday throughout the country, out of a total of 4,000 circulations, less affection – they say – than at the end of last week (when there was a day that 53 services were suppressed), most of Cercanías, which is, luckily, the service that is least used at this time for the Christmas holidays. “We are dealing with the disease,” railway sources assert to this newspaper; while in the Iberia airline the message is that the affected crew has been replaced with people who have been removed from the ERTE to fill the gaps. Iberia began December with 17% of people in ERTE, and ends it with 4% for this reason, the company appreciates ABC.

In all the sectors questioned, they endorse that the patients with Ómicron recover earlier, say, in general, the affected sectors, so the return is earlier.

From mutual societies and unions such as nursing, Satse, or the Central Sindical Independiente y de Servants (CSIF), they show that this sixth wave is taking precedence especially among health personnel, and is assuming a collapse of Primary Care centers, where active doctors are overwhelmed. From the State Confederation of Medical Unions (CESM) they adhere to the complaint of the General Council of Official Medical Associations (CGCOM) about the bureaucratic burden that the management of these losses entails, at this level of care, both due to contagion and isolation , with the consequent damage to chronic treatments and other pathologies that are not Covid. The CSIF speaks of a deficit of 29,354 professionals, which has meant that the 13,000 centers ended December with more than two out of every ten health care providers sick or infected (79%). Communities like Andalusia indicated yesterday that there are already a thousand workers missing out of the 120,000 of the regional health service (SAS). Casualties from Covid are causing stressful situations, such as the one experienced this week at the Virgen del Rocío Hospital in Seville, where a nurse took care of an entire floor. The Valencian Ministry of Health reports that there are 1,239 professionals on leave, 374 of whom are in quarantine.

The return to school next Monday could also be at half gas, as the unions fear a probable avalanche of teacher losses. In regions such as the Balearic Islands, the Ministry of Education has devised a plan B: to double the ‘express’ bag of substitutions, which will have 60 replacements compared to the 30 that were at the beginning of the year.