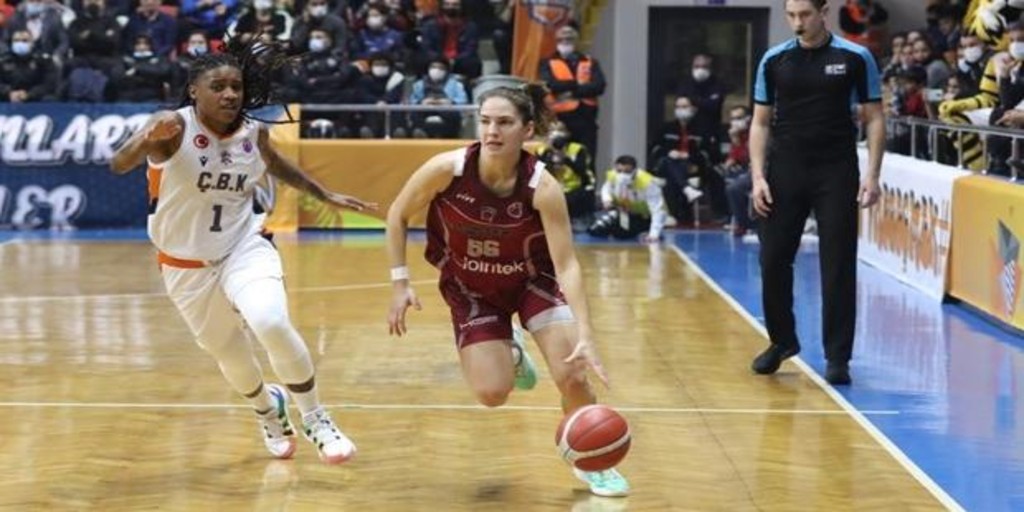 Gernika succumbs in Turkey to an ambush from another era

The Lointek Gernika, Spanish representative in the women’s Eurocup, had the first step in the playoff of the second continental competition well on track. He had won 24 points (83-59) in the first leg against el Cukurova turco, one of the favorites of the competition. However, the ambush that awaited him in Ottoman lands was not expected for the return clash, in the style of what happened in European competitions decades ago.

The Basques, who were coming out of a collective quarantine due to a Covid-19 outbreak, they finally fell 69-40 in a clash in which images typical of other times could be seen. From a blatant use of the public address system to decentralize the visitors in their attacks, to an arbitration that was intimidated and allowed the locals to be used with great harshness.

Even so, the Spanish team touched the feat, reaching the tie in the final stretch of the game, but an unsportsmanlike foul and a triple prevented it.

The peculiar circumstances in which the match was played begin hours before, when the Gernika squad was forced to undergo a PCR test despite having made one upon arrival in Istanbul. Kevin Huber, physical trainer of the Basque team, recounts it on his Twitter account. Despite the fact that the tests upon arrival in Turkey had yielded negative results, “we still had to experience something surreal, get to Adana, and a van with two executives from the rival club, accompanied by a ‘nurse’ tried to carry out the PCR in full street before getting on the bus. We got a little room to do it. The ‘nurse’ takes out the PCR tubes with the names already assigned … Suspicious? And they carry out the PCR on us, all this with their managers without a mask. Weren’t they so worried about not catching it and that’s why they did PCR on us? “

“We finished the process at 11:30 p.m. (1 hour after landing) and arrived at the hotel at 1:30 in the morning. The next day the surprise! One of our players is positive. How can it happen after finishing the covid until it becomes negative. We go to a hospital to have a new contrast PCR done, hoping for a quick result before the game, but it doesn’t arrive until 22:00, already after the game. Guess the result? NEGATIVE ”, he explains.

The “nurse” takes out the PCR tubes with the names already assigned … Suspicious?
And we carry out the PCR, all this with their managers without a mask.
Weren’t they so worried about not getting infected and that’s why they did PCR on us? pic.twitter.com/3mqMV8Earh

The positive was from the Spanish international Belén Arrojo, one of the most important players on the team. A result that, in addition to making her miss the match, has forced the Granada-born woman to stay on the ground while the rest of the expedition returned to Spain, awaiting a second negative test. The coach, Mario López, has stayed with her.

It was not the only strange circumstance before jumping onto the track, because in the previous one Çukurova had also decided to change its usual track, the Servet Tazegul Spor Salonu, for a much smaller pavilion, the Edip Buran Spor Salonu, with the stands much closer together to the park.

And with the ball in play, it was time to the public address system, which the local club used as one more weapon, and the arbitration performance. Throughout the meeting and coinciding with the Spanish attacks, Turkish songs and even anti-aircraft sirens sounded at full volume from the sports venue’s speakers.

Gernika attacks and begins to sound through the PA of the pavilion in Turkey … the Turkish anthem and anti-aircraft sirens.

Part of what suffered today for @GKesb in Eurocup. pic.twitter.com/DulKfoIizM

The environment must have intimidated the referees, very permissive with the harshness used by the local players, and whose performance culminated in Roselis Silva’s last minute unsportsmanlike behavior, which curtailed the reaction of Basque pride.

As if that were not enough, after the match and the classification in the pocket, the Turkish team celebrated the victory making fun of the spanish team. He did so by replying on social networks to the message that Gernika published after the first leg, cheerful but respectful with the rival. After several images of the Spanish women celebrating, she placed an alarm clock that read ‘good morning’ and an image of the Turkish players celebrating their triumph.

In short, an improper situation for modern basketball that, beyond the denunciation of the players and coaching staff of the Spanish team, should have consequences.