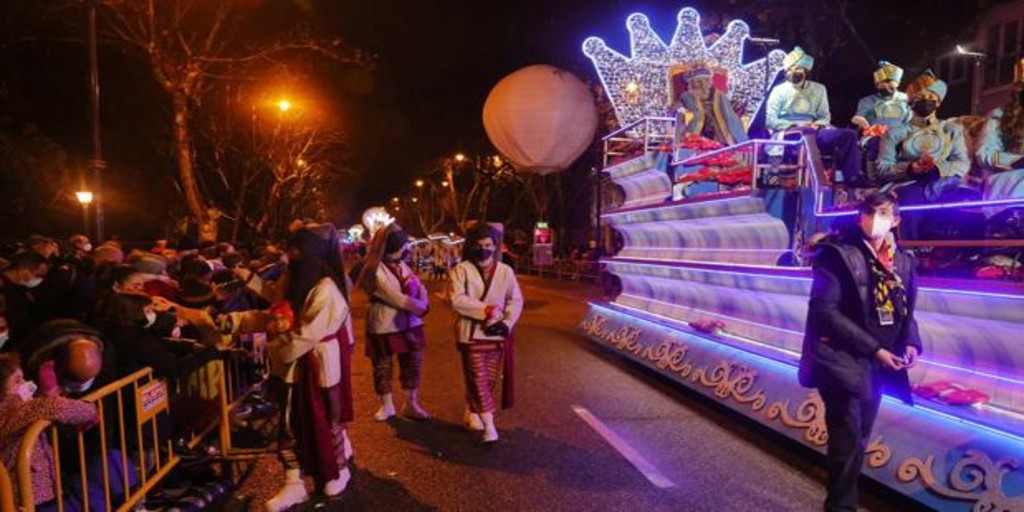 A rainy and anti-Covid parade

The streets of the main cities of Castilla y León have recovered the illusion and magic with the presence of the Three Wise Men in the different cavalcades that from 6:00 p.m. took place in the provincial capitals of the Community, in a scheduled journey due to the mandatory mask and the distance to avoid contagion, in the middle of the sixth wave of the pandemic, and by the rain that, after threatening throughout the day in the nine Castilian and Leonese provinces, he finally made an appearance in some of them without forcing, however, to suspend any parade of the main towns of the Community.

In Avila, their majesties and their entourage have thrown a total of 1,200 kilos of sweets to the children stationed along the route of the parade, which, after starting its journey on Calle Banderas de Castilla, has begun the passage through the Paseo de la Estación, the Plaza de Santa Ana, Calle Arévalo, Paseo Dos de Mayo, Avenida de Portugal and Avenida de Madrid until reaching Lienzo Norte, where the spaciousness of the space has allowed the little ones to enjoy the presence of Melchor, Gaspar and Balthazar.

In Burgos, the starting point has been the avenue of Human Rights. From there, the 600 people among artists, collaborators and security members that this year, however, they have not been able to launch candy, due to the decision of the City Council derived from compliance with the Covid protocol, but that they have made the afternoon happy with the shows offered by the 26 participating national and international companies from Burgos.

Lion has seen how the 280 participants in the parade handed out 150,000 lollipops suitable for celiacs while the companies offered their shows to the delight of an audience that had more space than in other years when considering a “more dynamic” route. Similarly, in Ponferrada About 7,000 kilos of candy were distributed to children, and not so children, who came to see the parade.

For its part, Palencia has not only enjoyed Sus Majesties of the East but also the Wizard Merlin, among others, along with the people who participated in the procession. Salamanca changed its route to take advantage of its large avenues, in a parade in which the 5,000 kilos of sweets were distributed with which the Three Wise Men wanted to give to the little ones who came to see them arrive in the charro capital.

Meanwhile, in Segovia, Their Majesties from the East left the Alcázar, after two years of absence, to undertake the main streets of the city and make those present enjoy themselves, who were able to distribute themselves through the different Segovian roads.

In Soria The tour began at 7:00 p.m. in Los Pajaritos and, upon arrival at the Plaza Mayor, the Three Wise Men will stand next to the Bethlehem of the Soria Agora to see the different attendees of the parade pass by, always maintaining the distance of Recommended security to avoid the greater spread of Covid. Valladolid He also proposed a change of route to guarantee a greater space that would allow the little ones to enjoy, from 6.30 pm, the presence of the Magi. Finally, in Zamora The royal entourage received the keys to the city and went to the little ones, after entertaining them with a procession that started at half past six in the afternoon.