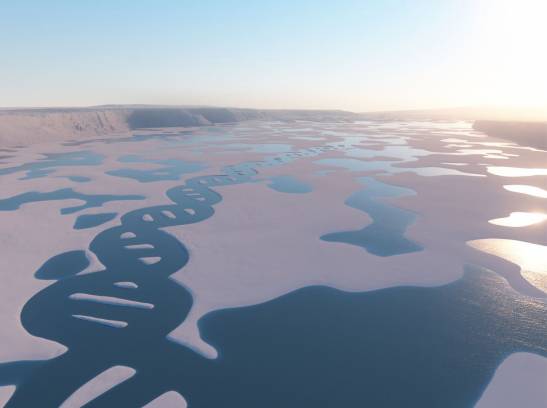 They reveal the genome of 500 Arctic microorganisms, 80% unknown until now

A team of researchers led by the Institute of Marine Sciences (ICM-CSIC) from Barcelona has unveiled the genome over 500 marine microorganisms, of which more than 80% belong to unknown species until now.

The details of the find, which shows how limited our knowledge of these organisms is in one of the most remote areas of the planet, the Arctic Ocean, are collected in an article published this week in the magazine Nature Microbiology.

Knowledge of these organisms is key to understanding and predicting their responses to environmental changes, which could have a significant impact on climate dynamics. This has implications not only in the polar zones, but also in other latitudes, since marine microorganisms are the main drivers of the global biogeochemical cycles.

Marine microorganisms are the main drivers of global biogeochemical cycles

It is an especially relevant fact in the current context of global change, since the polar regions are very sensitive to climatic variations. For example, in the Arctic, the accelerated melting of glaciers, the permafrost -The permanently frozen layer of soil- and changes in the extent of the thickness of the sea ​​ice they cause environmental changes with a strong impact on ecosystems and local societies.

“To improve knowledge about the impacts of climate change on the Arctic ecosystem, it is necessary to know the main microbial actors, their dynamics, their activity patterns and their metabolic potential,” explains the ICM-CSIC researcher and lead author of the study. Silvia G. Acinas, who stresses that until now no one has evaluated the microbial diversity of the Arctic ocean regions in such detail.

The melting of glaciers, permafrost and sea ice cause environmental changes with a strong impact on ecosystems and local societies

For the development of the work, the research team analyzed seawater samples collected during the expedition. Tara Oceans Polar Circle, the last sampling of the expedition Tara Oceans (2009-2013), who traveled through various Arctic ocean regions through different marine protected areas for seven months.

Marta Royo Llonch, also a researcher at the ICM-CSIC and first author of the study, points out that “the possibility of reconstructing microbial genomes from ADN microbial communities thanks to tools of bioinformatics and improved sequencing, together with the existence of standardized protocols for sampling plankton, has allowed us to obtain the most complete data set of uncultured prokaryotic genomes to date. We have called it the Catalog of MAGs (Metagenome Assembled Genomes) of the Arctic “.

Another highlight of the research is that it suggests that there are many species that are unique to the polar zones and have a restricted habitat distribution in the Arctic Ocean, especially in deeper waters.

“We have identified key bacterial and archaea genomes unique to the polar oceans and specifically the Arctic, which are the most active in terms of gene expression and, therefore, they must play an important role in the biogeochemical cycles of this ecosystem. For this reason, these microorganisms should serve as a reference base for future monitoring of the state of the Arctic Ocean ”, Pablo Sanchez, another of the authors of the work.

These microorganisms have great metabolic versatility, which gives them greater resilience and allows them to better adapt to environmental changes.

Among the hundreds of microorganisms described in this catalog, there are those with great metabolic versatility and that are mixotrophic. This implies that they use different sources of energy and carbon to function, either as autotrophic –By producing complex organic compounds (carbohydrates, fats and proteins) from the carbon of simple substances–, or heterotrophos –Those who cannot produce their own food, but are nourished by other sources of organic carbon (plant or animal matter) -.

According to the authors, these characteristics may endow Arctic species with greater resilience, allowing them to better respond to stresses. environmental changes.

“Future studies should focus on monitoring these species, as some of them could be more susceptible to the effects of climate change due to their restricted distribution, which would help to better understand in what state of conservation there is the Arctic Ocean ”, they conclude.

Institute of Marine Sciences of the CSIC