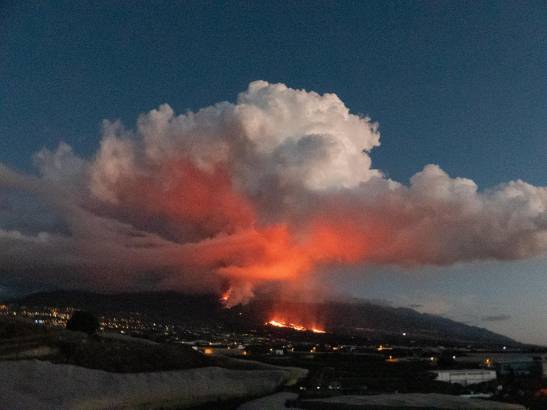 Since the beginning of the eruption of the Cumbre Vieja volcano, on September 19, the island of La Palma has grown on 43 hectares due to the lava deltas or strips created by the lava when it reaches the waters of the Atlantic Ocean. This is indicated by the latest data published by the European satellite system Copernicus, which amounts to 2,651 destroyed buildings for this material.

The Department of Homeland Security (DSN) has indicated in its latest report on the volcano that the continuous supply of lava from the main cone of the eruption has caused flows 4 and 7 to join and increase the total area 1,058 hectares affected (eight more than the last registered data).

In addition, about 40 earthquakes have been recorded since last midnight on the island, according to data from the National Geographic Institute (IGN) which specifies that, in general, all have been of low magnitude, except one of medium magnitude (4.3) in the town of Mazo. In total, the most significant, apart from the one mentioned, have been six earthquakes of one magnitude between 3.1 and 3.7, has notified the IGN on its website.

Regarding the depth of the earthquakes, most have been located at intermediate depths, below 25 kilometers, while the municipalities of Fuencaliente and Villa de Mazo have concentrated almost all of the seismic activity.

The tremor level also remains low with some occasional fluctuation. According to the air quality, in recent days, this has shown a worsening with an increase in the sulfur dioxide generalized, which improves throughout the morning to good values ​​in the stations on the west side of the island, and between reasonably good and fair in the stations to the east.

The airport from La Palma continues inoperativo due to ash accumulation, according to AENA.