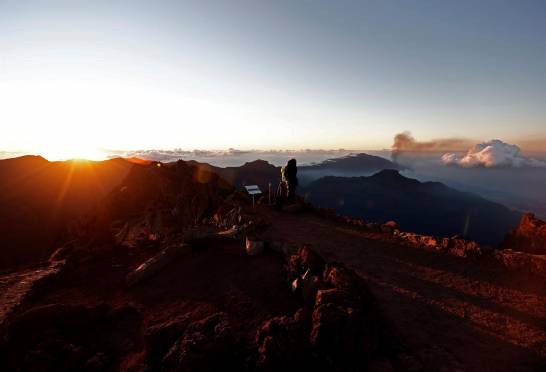 Next Friday, November 19, two months have passed since the beginning of the eruption on the island of La Palma. The decline in levels of sulfur dioxide emanating from the fissure, as well as in the earthquakes at intermediate depth, they point out that the volcanic system has less and less energy, according to scientists who have monitored the eruption since its inception.

In fact, sulfur dioxide emissions associated with the volcanic plume fluctuated yesterday Saturday between 2,000 and 4,000 tons, far from the more than 50,000 tons that were recorded on September 23, although the scientific spokesperson for the Canary Islands Volcanic Emergency Plan (Singer), Maria Jose Blanco, recalled this Sunday at a press conference that they are still high values.

Sulfur dioxide emissions associated with the volcanic plume fluctuated between 2,000 and 4,000 tons on Saturday, far from the more than 50,000 tons that were recorded on September 23.

“It seems that the system has less and less energy and the levels of intermediate seismicity, tremor, deformation and sulfur dioxide show a stable or downward trend, but we have to wait for it to be maintained over time,” he said. the scientific spokesperson.

In turn, the technical director of Pevolca, Miguel Angel Morcuende, has specified that the lava continues to flow towards the lava delta, which is “very good news” because it does not find dikes, does not grow in thickness or cause spills and therefore does not occupy new territories with what it would come “to do more damage ”.

Unlike yesterday, when the lava flow that received the most magma contribution was the first of all, today the one with the most “feeding” is the ninth, the one located further south, and between this, the original one and the number two have formed the growth of the lava delta, which is already located above that generated by the San Juan volcano (1949).

But Morcuende has emphasized above all that there are no lava spills and therefore, no additional problems are being generated “to what is pure emergency”, that is, damage to “lives and properties”.

The managers of Pevolca have also welcomed the absence of surface seismicitySince the earthquakes remain at great depth and in fact the largest recorded today, with 4.7 mgLg, was located at 37 kilometers and reached an intensity IV.

This deep seismicity is the one that is maintained, and the intermediate one -between 10 and 15 kilometers-, shows a downward trend.

As for the diffuse emission of carbon dioxide associated with the Cumbre Vieja ridge, yesterday it was between 1,800 and 2,000 tons.

The air quality has remained at good or reasonably good levels for sulfur dioxide disease, except for Puntagorda and The Plains of Aridane, which has been regular at specific times.

Regarding suspended particles less than 10 microns, low values ​​are registered in all the stations of La Palma except for one high intensity episode that occurred between 12:00 and 14:00 hours yesterday associated with the work of ash cleaning in Los Llanos de Aridane, which caused a very unfavorable level of air quality.

However, today Fuencaliente has closed access to the exclusion zones to collect belongings or documents due to the high concentration of sulfur dioxide in the evacuated areas, which can be harmful to health, Miguel Ángel Morcuende specified.

To date, the lava has devastated 1,019.79 hectares of surface and according to the Cadastre data, it has destroyed 1,460 buildings, of which 1,181 are for residential use, 159 agricultural, 67 industrial, 34 commercial, 13 for public use and 15 for other activities.

While, 481 people who were evacuated from their homes stay in hotels in Fuencaliente and Los Llanos de Aridane, and 43 people dependents stay in social health centers.