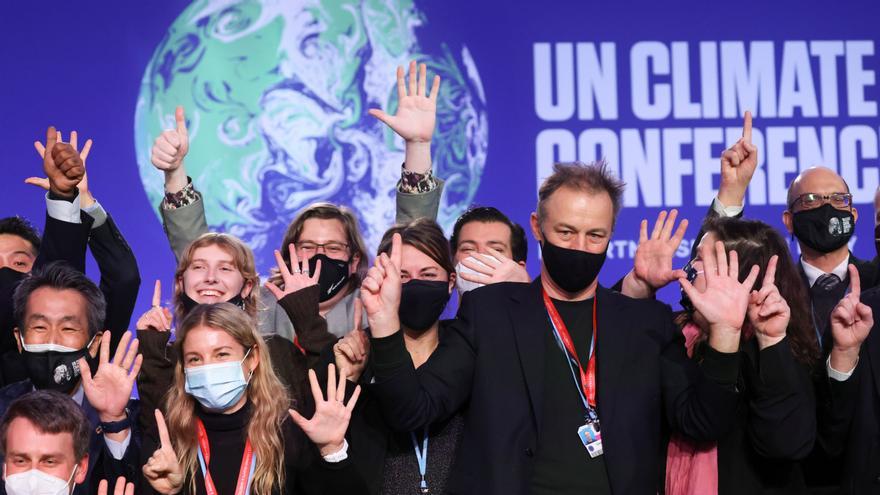 The Glasgow Climate Summit (COP26) reached an agreement this Saturday after two weeks of intense debate and an extraordinary extension. This pact, which will be voted on in the next few minutes, needs to add the consensus of 197 governments to be officially approved.

The conclave should have ended this Friday, around six in the afternoon, after two weeks of intense negotiations between governments around the world. But the lack of agreement on some of the critical points of the debate has lengthened the discussions one more day and has postponed the verdict to the weekend. Earlier on Saturday, the publication of a new draft of the agreement has shown where the sticking points lie. There is discussion about the future of fossil fuels, about climate funds for the global south, about the importance of not exceeding 1.5 degrees of global warming. The disagreements are still latent but, according to the negotiators before the United Nations plenary, Glasgow is not yet ready to throw in the towel. Although, as the negotiations advance against the clock, fear of failure still there.

According to the third draft of the agreements, published this Saturday morning, the governments agree to postpone between one and two years, at best, the deployment of your climate ambition. The text calls on governments around the world to dedicate the following year to redesign your plans to reduce its levels of greenhouse gas emissions in the short and long term. It also postpones to next year the debate on the global carbon market, which has stood out as one of the most controversial points since the Paris Agreement. The document also calls for a meeting of world leaders in 2023 to evaluate their strategies for 2030.

The conclusions of the Glasgow Climate Summit thus they begin to be written in the future. And this is synonymous with failure in a world where the climate crisis creates havoc and threatens an even more devastating future. It worries, on the one hand, to see how global pacts are postponed time and time again. As happened in Madrid and in many, too many, previous summits where after weeks of debate it was only agreed to continue debating in the following years. It is also worrying to see that even the most promising mentions, such as the beginning of the end of fossil fuels, they are not specified in any plan, measure or calendar specific.

How many more summits?

This Saturday morning, just outside the hall that houses the negotiations, a huge poster exclaimed: “How many more summits do we need to stop the climate crisis?“. The question, posed there by a group of activists, directly questioned the government representatives who, after a few hours of rest, returned to the discussion table to try to close the Glasgow agreement. The discomfort with the agreements is beginning to grow. sprout even before the final version is approved. Because, barring surprises, Glasgow will close breaking much of its promises. Or at least the expectations generated after a start in which he promised to be the beginning of the end of the climate crisis.

One of the issues that is causing the most friction in the closing of this Climate Summit is the lack of agreement to finance “loss and damage” caused by the climate crisis in the global south. After twelve days of endless debate, the third draft of the agreements does not mention any specific mechanism for help developing countries to raise its head after the impact of extreme weather conditions. The analyst Tasneem Essop, from the ‘Climate Action Network’ initiative, defines this lack of specificity as “a betrayal of the millions of people that right now they are suffering the effect of the climatic devastation “.

“The fact that an agreement to finance loss and damage does not appear is unacceptable and shows a lack of moral leadership“They point out from the ‘Loss and damage collaboration’ platform.” Vulnerable countries are being pressed to settle for endless talk“, explains Mohamed Adow, director of the ‘Power Shift Africa’ platform, fearing that the pressure of negotiations that are advancing against the clock will end up eliminating this request from the final agreement.