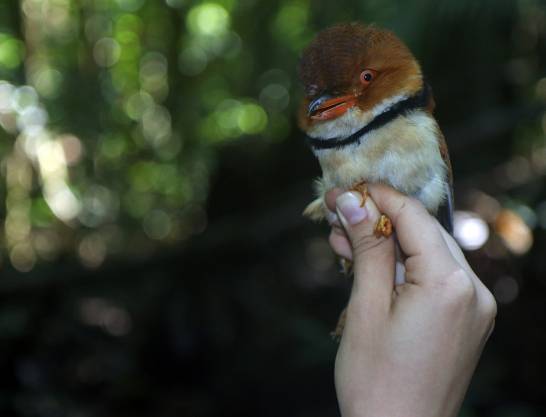 Some Amazon birds have shrunk in size due to climate change

In 1847, and after various investigations, the German biologist Carl Bergmann postulated a known rule, according to which animals homeotermos —Capable of maintaining their temperature— were morphologically larger in colder climates (and vice versa), establishing a correlation between ambient temperature and body mass.

With this maxim in mind, the team of Vitek Jirinec, investigator of Louisiana State University (USA) has studied 77 species of birds non-migratory species from the Amazon understory —our protagonists of #sciencealobestia— to discover that the average body size of some of them has diminished in the past 40 years, in response to increasingly hot and dry conditions.

“Our results indicate that in our place of study the climate is changing, and at the same time, also the morphology of the birds exposed to these climatic conditions”, highlights SINC Jirinec.

According to the work, published in Science Advances, all the species studied in a virgin area of ​​the Amazon currently have a lower average mass to the one they had in the early 1980s, and, of those studied, 61 also show a mean increase in wing length.

To show that the long-term decrease in body mass was related to a temperature increase, Jirinec and his team measured the variations between body mass, wing length, and the relationship between the two, comparing them with seasonal precipitation patterns, discovering that the morphology of the birds studied also varied in the short term, which “It is further evidence that the shape and size [de las aves] it is related to the temperature and the rain ”, indicates Jirinec.

Morphological adaptation over the decades

The study notes that tropical birds at the heart of the world’s largest rainforest are evolving rapidly in response to the pressures of man-made climate change, and to cement that claim, scientists re-analyzed climate data from the region throughout 50 years, obtained thanks to the Project of Biological Dynamics of Fragmented Forests (BDFFP) in the Brazilian Amazon.

The authors then compiled the body mass measurements of nearly 15,000 birds and the wing length and the mass-wing relationship of more than 11,000 birds studied in this area throughout four decades, comparing their morphological variations with data on the abundance in the number of individuals.

The team found that all 77 species showed an average decrease in body mass, and that 36 of them appeared to have lost up to almost a 2% of your body weight per decade since 1980. All species showed a mean reduction in their wing mass ratio, and 61 of them showed a mean increase in wing length during this time.

For Jirinec, the greatest contribution of his article is to demonstrate that changes in the shape and size of Amazonian birds are related to the climate change, and that the actions that contribute to its acceleration throughout the world have repercussions in places as “pristine” as the Amazon forest, underlining the global magnitude you have acquired this process.