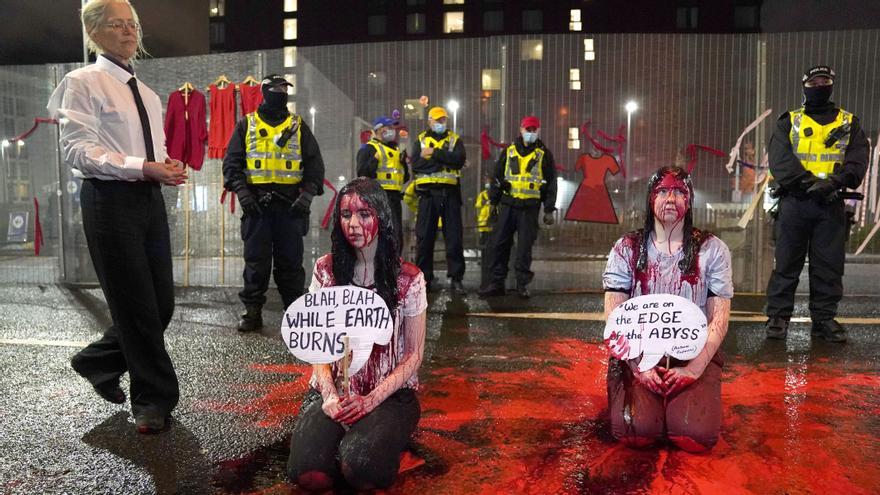 The Glasgow Climate Summit (COP26) has entered injury time. Glasgow’s final pact was due to be published this Friday night but, after a tense plenary full of questions, the negotiations will drag on for another night and no news is expected until well into Saturday. This Friday, first thing in the morning, the latest draft of some agreements key to the future of the planet. The text, which negotiators are now discussing, reinforces the message against polluting energy sources and calls on countries to “accelerate the phase-out of coal energy and inefficient subsidies for fossil fuels“This request already appeared in the draft agreement published on Wednesday, but in the final stretch of the negotiations it seems that the language has changed. In the new version of the draft, the mention of fossil fuels is somewhat diluted in a more generic appeal on the need to bet on clean energy sources. Although no type of calendar, measure or commitment is detailed concrete to achieve it. Of course, it is the first time that a text of this type has crossed out oil, coal and gas subsidies as “inefficient.”

The latest draft of the Glasgow Accords also reinforces the message about the need to accelerate the reduction of greenhouse gas emissions. The text, in fact, recalls that to limit the global increase in temperatures to a maximum of 1.5 degrees on average, it is necessary to cut emissions by at least 45% before 2030 and reach a net zero by 2050. That said , The document “invites countries to consider further actions to reduce their emissions“Before the end of the decade. Likewise, the text calls on all governments that have not yet delivered their updated plans on how to achieve this goal to do so before next year. It also asks that every five years governments submit a detailed plan on their projected emissions for the next decade.

The petition, launched with quite forceful language for this type of text, seems to have generated blisters on the negotiating table. In fact, according to another of the technical documents published a few hours ago, some governments challenge this decision and they ask to reopen the debate before closing the agreement. In the corridors of Glasgow, rumors suggest that Saudi Arabia is among the governments that is pushing the most to change this part of the wording. The final text needs add the consensus of the 197 parties before being definitively approved. So, on the eve of the closing, everything indicates that the debate will be intense.

As reflected in this latest draft, after two weeks of debate, the countries have indeed managed to close an agreement for the creation of an external body to monitor the deployment of climate policies. This new program, led by United nations, will present annual reports on the evolution of the emission levels of each country. The first balance will be published next year, during the next edition of the Climate Summit, which will take place in Egypt. Although it seems a purely diplomatic question, the real objective of this program is none other than prevent countries from cheating and declare that they are polluting less than they actually do. So at least this is good news.

Funds for the global south

Another critical point that should take shape in the next few hours has to do with the funds that more than a decade ago rich countries promised to deliver to developing states to face the advance of the climate crisis. The latest draft of the text calls for “mobilize” all possible resources for consolidate $ 100,000 annually by 2025. These days, several governments and financial entities have promised to increase their contribution to these funds. Although it is not yet clear when and how it will be done.

The text also claims doubling the collective contribution of rich countries to the climate adaptation funds. This increase in financing, the document highlights, should be consolidated in the next four years. The draft also highlights the need to strengthen tools for remedy “loss and damage” that the climate crisis is causing in the poorest areas of the planet.

Final straight of the negotiations

This is how the final text of the Climate Summit is taking shape against the clock in a city, Glasgow, which This Friday has dawned especially cold and rainy. In this final stretch of negotiations, a word, a comma or the verb form of a verb (past, present or future) could change everything. As this latest draft of the debate shows, at some points the language is nuanced. In others it is reinforced.

The final agreement was due to be published on Friday afternoon, around 6am (UK time). But after a plenary session full of tension, negotiations have taken much longer than expected. The presidency plans to publish a new draft of the text this saturday morning. At eight, if all goes well. Around ten o’clock another extraordinary high-level meeting will be convened to discuss the latest developments. If a consensus is reached on the final draft by then, the delegates will proceed to vote. The document needs add the consensus of almost 200 countries to move forward. There is still a long way to go to know whether Glasgow has been a success or the umpteenth disappointment.