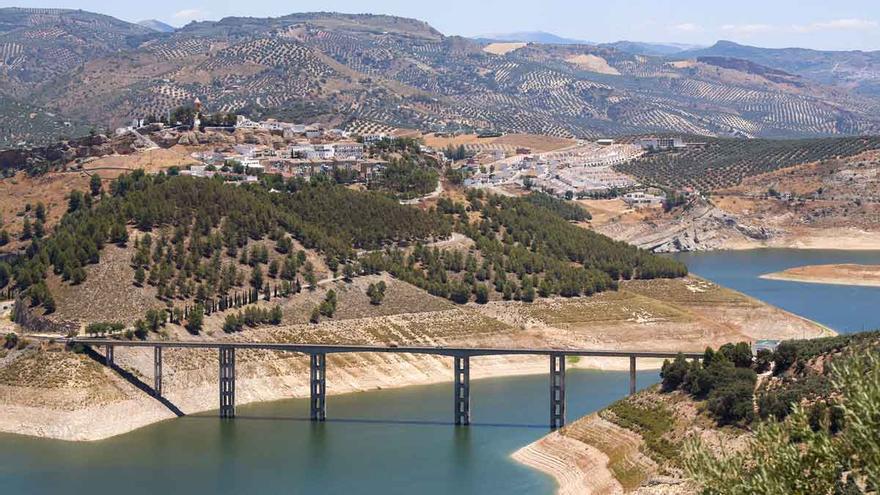 Drought in Spain: The Guadalquivir basin, in critical situation with reservoirs at 26%

The low level at which the Iznájar reservoir is located, located between the provinces of Córdoba, Granada and Málaga, it allows you to see the remains of the Cordoba town that was flooded after its inauguration in 1969. The reservoir, which is the largest in the Guadalquivir basin and the tenth in Spain, with 981 cubic hectometres of capacity, has started November with only 200 cubic hectometres stored (20%).

The state in which Iznájar is located is a great indicator to know the general situation of the Guadalquivir basin, only at 26.3% of its capacity, which has led the hydrographic confederation to declare this week the exceptional situation due to extraordinary drought. La Breña II, another Cordovan reservoir that is the second in capacity in the Guadalquivir basin with 823 cubic hectometres, is not in better condition as it is only 14.8%. This drastic reduction in its level has caused the old La Breña dam to emerge, hidden since it began to fill in 2009.

The president of the Guadalquivir Hydrographic Confederation, Joaquín Páez, recognizes the “critical situation & rdquor; of the basin behind a dry period that lasts almost a decade, since the rainfall and the water that has reached the fifty reservoirs of the Guadalquivir have always been, except in 2018, below the historical average. What’s more, it does not hide the consequences that climate change is already having as the periods of drought become longer and there are specific episodes of heavy rainfall. Páez has assured that the basin has been immersed for 25 years in a situation of climate change, which is causing a reduction in water supplies to the reservoirs and a rise in average temperatures.

Currently, the basin registers 17% less accumulated precipitation compared to the average of the last 25 years, 57% less contributions in reservoirs and 20% less than average volume in reservoirs. Only 4.3 million people depend on the Guadalquivir, 554 municipalities and 890,000 hectares of irrigated land in Andalusia and Ciudad Real. With these levels, the Guadalquivir Confederation only guarantees the supply for the population in the next two years and recognizes that there may be specific areas with water problems if the situation does not change soon.

That is why it has activated the Special Drought Plan this week, a set of measures aimed at optimizing the available resources and which entails the reduction of endowments in the different uses. Thus, there will be restrictions on industrial and agricultural use and it will undertake education and awareness campaigns among the population to save water, in addition to reinforcing surveillance and control of the basin to prevent illegal water withdrawals. In addition, the Confederation will immediately request the Ministry for the Ecological Transition and the Demographic Challenge to approve a royal decree law to alleviate the effects of the drought.

In the last three years there have been restrictions on irrigation, arriving in the last campaign to reduce the allocation to 50%. The president of the Confederation has warned that in a 70% probability this hydrological year 2021/2022 there will only be survival irrigation to guarantee the irrigation of woody crops, being very complicated that there is for non-permanent crops.

“We are in a situation that can only be compared to the drought that occurred between 2006 and 2008 & rdquor ;, assures the general secretary of the Association of Irrigation Communities of Andalusia (Feragua), Pedro Parias. “We have the rainy months ahead of us, after an October that has been very dry & rdquor ;, explains Parias, who remarks that already during the past agricultural year the Guadalquivir irrigators have been affected in their productions in the different crops by the reduction of irrigation endowments. For this reason, Feragua requests that the Administration royalties and fees are waived for all the irrigators of the Guadalquivir and compensatory fiscal and economic measures to alleviate the effects of the drought, as already happened in the 2006 drought.