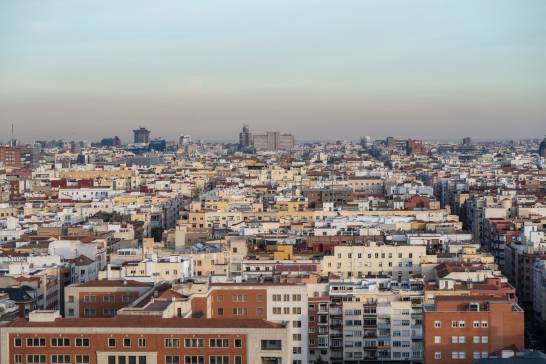 How cities can ‘cool down’ and reduce greenhouse gas emissions

In urban areas, the increase in temperatures occurs at a rate twice that of the global average. The United Nations Environment Program (UNEP) has posted a detailed guide to help the world’s cities cope with this warming. This report has been presented at the Glasgow Climate Summit (COP26) by, in addition to the UNEP, the Cool Coalition, RMI, the Global Covenant of Mayors for Climate and Energy (GCoM), Mission Innovation and Clean Cooling Collaborative.

If greenhouse gas emissions remain high, many cities could warm by as much as 4 ° C by the end of the century

If the emissions of greenhouse gases remain at high levels, many metropolises could heat up patient 4 °C by the end of the century, the document notes. Even if the increase in temperatures is only 1.5 ° C, it is estimated that 2.3 billion people could be vulnerable to severe heat waves.

“Science tells us that to prevent global temperature from rising more than 1.5 ° C, we have to get emissions to zero by mid-century. Sustainable and equitable district cooling must be part of cities’ efforts to achieve net zero energy targets, ”he explained. Inger Andersen, Executive Director of UNEP.

In exposing the problem, the guide explains how cities heat up rapidly due to heat island effect –Which is caused by a combination of the decrease in vegetation cover, the thermal properties of the materials commonly used in urban surfaces and the residual heat from human activities.

According to the report, the energy demand for the space cooling is on the rise. This is expected to triple between 2016 and 2050, as millions of households in developing countries will purchase air conditioners in the coming decades.

In addition, the impacts of urban heat they are not evenly distributed. Cooler cities, homes and streets are critical to ensuring the climate justice –In other words, it is not the people least responsible for climate change who suffer its worst consequences.–.

Lower income districts and communities are often the most vulnerable to heat. This means that the negative impacts of overheating fall disproportionately on those who are least likely to access it. Thermal comfort. For this reason, experts insist that we must move to more equitable and sustainable ways of cooling our metropolises and making them habitable for all.

Sustainable district cooling brings a host of benefits, such as improved health, reduced demand for electrical energy, and reduced emissions

The sustainable district cooling It also brings a host of benefits, such as improved health and productivity, reduced demand for electrical power, and reduced emissions.

Also, cooling strategies can be optimized to work together efficiently. For this reason, the report advocates a global approach, that is, reducing heat on an urban scale, reducing cooling needs in buildings and meeting these needs efficiently, to benefit from the integrating effects.

City officials working to make their cities cooler and more livable face a wide range of approaches – the challenge is where to start.

“It includes practical guidance to help cities organize and prioritize action towards sustainable and equitable urban cooling, while reducing emissions and increasing city resilience,” he concludes.

The guide’s 80 case studies demonstrate the effectiveness of the strategies outlined and can help cities find the approach that best suits their unique contexts. These are some examples:

The heat reduction services offered by the urban tree canopy in the US are estimated to be worth between $ 5.3 billion and $ 12.1 billion annually. Worldwide, an investment of 100 million dollars a year in trees in the streets would reduce maximum temperatures by 1 ° C on hot days.

An initiative to restore the Cheonggyecheon Stream, which runs through the city, replaced 5.8 kilometers of the elevated highway that covered the creek with a mixed-use river corridor. This corridor lowered the temperature from 3.3 ° C to 5.9 ° C compared to a parallel road located a few blocks away.

Green corridors were created that follow and restore the geography of the area prior to recent urban development. From 2016 to 2019, the city created 36 corridors, 18 along major highways and 18 along waterways, spanning more than 36 hectares. Areas with green corridors have already seen temperature reductions of up to 4 ° C.

The French capital is home to the first and largest district cooling system in Europe. When the water temperature of the river Seine, which runs through the city, is below 8 ° C, this water is used to provide ‘free cooling’.

The municipal government launched the largest lake-based refrigeration system in the world. Launched in 2004, this system uses cold water from Lake Ontario as a renewable energy source.

It adopted regional centralized cooling as part of a modern, green and environmentally friendly urban center. The local temperature in the core area of ​​Zhujiang New City decreased by 2-3 ° C.