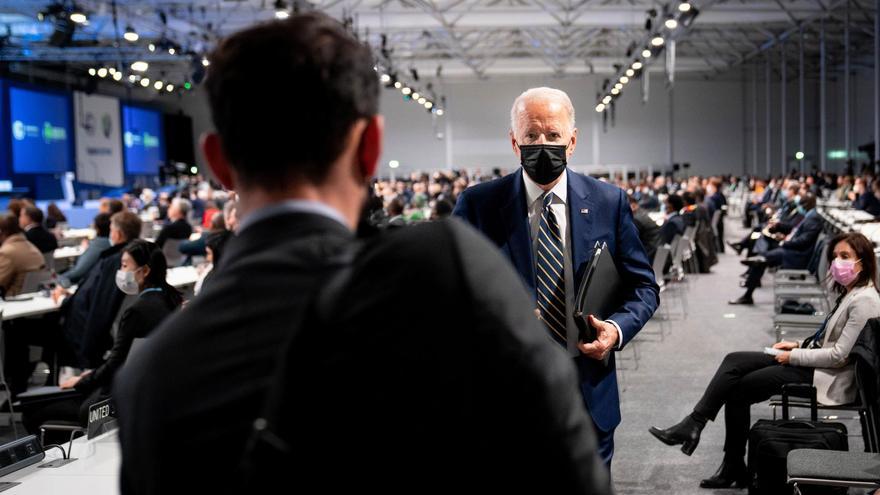 The president of the United States, Joe Biden, asked this Monday that the Glasgow COP26 climate summit (UK) is “the starting point of a decade of ambition and innovation” to combat the “existential threat” of climate change.

“This is the decade that will determine the next generations. It is the decisive decade in which we have the opportunity to show ourselves that we can maintain the goal of (limiting warming to) 1.5 degrees,” he said in his speech at the conference.

The American stressed that climate change “is not hypothetical”But it already affects the lives of many people every day, including in their own country, in the form of wildfires, floods or droughts.

“None of us can escape the worst of what is to come if we fail to seize this moment.”he stressed in his speech.

After detailing the commitments made by his government in recent months, he announced that throughout the summit the United States will launch new initiatives, in fields such as agriculture, fossil fuels or the fight against deforestation.

For Biden, the recent spike in energy prices only demonstrates the need to act and advance the development of renewables.

He also wanted to present as an “incredible opportunity” for all countries the evolution towards a green economy, something that is “a moral imperative, but also an economic imperative” thanks to the creation of new jobs in different sectors.

Biden urged rich countries to increase their financial support for developing countries: “Those responsible for deforestation have a huge responsibility towards them.”

“There is no longer time to lag behind or fight each other” in the face of the “existential threat” posed by the climate crisis, “he added.

“Let us make this the moment when we respond to the call of history”, stressed the US president, who will remain in Glasgow for two days after having participated last weekend in the G20 summit in Rome.

On the other hand, the German Chancellor, Angela Merkel, on Monday urged countries to raise your emission reduction targets because the current rhythm does not allow to get “where it is necessary to be”, in his speech.

Merkel expressed her hope that this summit, which runs until November 12, finish with more ambitious “how did you start” goals and noted that it will also be important to agree on mechanisms to measure the progress of each State.

“We must and can implement the Paris Agreement” of 2015, in which the heads of state and government pledged to try to limit global warming to 1.5 degrees Celsius this century, he said.

German politics said that rich countries “have a special responsibility” to lead in cutting harmful gases and they must fulfill their promise to contribute 100 billion dollars annually to developing countries to combat climate change, which will be achieved, “late”, in 2023.

Merkel reaffirmed Germany’s commitment to reach a net zero of emissions by 2045 and reduce them by 65% ​​over the level of the 1990s by 2030, as well as increase its annual contribution to the fund for countries from 4 to 6 million euros. poor in 2025.

The Foreign Minister recalled that she had the privilege of attending, as Minister of the Environment, the first UN climate summit in 1995 and confirmed that this will be the last, at least as Head of Government, since she will leave office after 16 years .

The EU asks to tax CO2

The President of the European Commission, Ursula von der Leyen, asked the international community at COP26 to CO2 emissions are taxed because “nature cannot pay that price any more.”

“Put a price on carbon, nature cannot pay more that price”Von der Leyen declared at the summit of leaders of the UN conference on climate change being held in the British city of Glasgow.

The European Union (EU) has had a CO2 emissions trading market since 2005, the so-called ETS, where the carbon dioxide emissions of 11,000 energy-intensive plants are taxed.

The European Commission has proposed to extend this platform to other sectors such as the air conditioning of buildings and road transport and is considering implementing a carbon adjustment mechanism at the border that taxes certain products that enter the European market.

“All of us here at COP26 want to be on the good side of history,” added Von der Leyen, who called for respecting the 1.5 ° C limit of temperature rise at the end of the century compared to pre-industrial values.

Draghi asks to go beyond what was agreed by the G20

For his part, the head of the Italian Government, Mario Draghi, urged the 120 world leaders gathered in Glasgow to “go further” from the commitments made by the countries of the G20 at their meeting in Rome last weekend.

“Here at COP26 we must go further than we did in the G20. We need to accelerate our commitment to keep the rise in temperatures below 1.5 degrees,” said the Italian official, whose country organizes, in association with the UK, this conference.

“We need to build on what was agreed at the G20 and act faster and more decisively “, he indicated.

For the former head of the European Central Bank, now “you have to use the resources” made available by the private sector and “find a smart way to spend them.

“We need, first and foremost, that all the multilateral development banks can put all this money to be used for a good cause “, he pointed.

He recalled the words of the British Prime Minister, Boris Johnson, that “money is not a concern if we want to use it well.”