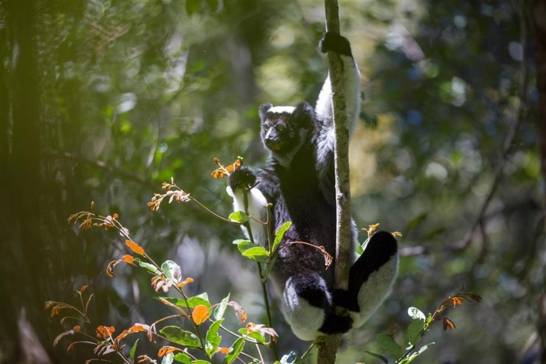 Songbirds share the human sense of rhythm, but does this musical ability repeat itself in non-human mammals? An international study conducted with lemurs Indri indri, on critical danger of extinction, it proves yes. The results have been published in the journal Current Biology.

The scientists of the Max Planck Institute for Psycholinguistics (Netherlands) and the Turin University (Italy) looked for musical traits in other species in order to understand how rhythmic abilities originated and evolved in humans.

To find out if nonhuman mammals have sense of rhythm, the team studied one of the few ‘singing’ primates, the lemur, for 12 years in Madagascar Indri indri, and thus they checked if their songs had categorical rhythms, that is, universal patterns that seem to be found in all musical cultures human.

An easy to recognize rhythm

Rhythm is categorical when the intervals between sounds are exactly the same length (1: 1 beat) or doubled (1: 2 beat). This makes a song easily recognizable, even if it is sung at different speeds, they explain from the Max Planck Institute.

The researchers recorded the songs of 20 groups of indri (39 animals) that lived in their habitat natural. They thus found that members of an indri family group usually sing together, in harmonized duets and choirs, and discovered that the songs of these animals had the classical rhythmic categories (both 1: 1 and 1: 2), as well as the typical ritardando or slowdown found in various musical traditions.

In addition, they observed that male and female songs had a weather different, but they showed the same rhythm.

The song of the indri, in danger of extinction

According to the first author, Chiara de GregorioThis is the first evidence of this “universal rhythm” in a non-human mammal.

The male and female songs had a different tempo, but showed the same rhythm

This ability may have evolved independently between the singing speciesSince the last common ancestor between humans and the Indri lived 77.5 million years ago, according to experts.

The next step for scientists is to find evidence of other musical patterns in the indri and other species. In this sense, Andrea Ravignani, a co-author of the study, encourages other researchers to collect data on the indri and other endangered animals, “before it is too late to witness their impressive singing demonstrations.”