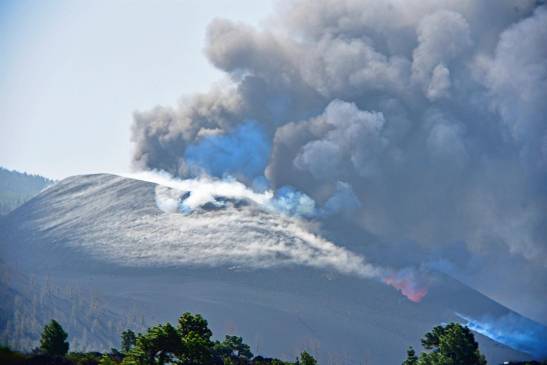 The volcanic eruption of Old Summit, on La Palma, is still active 15 days later that it started with “full power”, without scientists being able to predict a near end and while seeking urgent solutions in terms of housing, infrastructure and irrigation.

The President of the Government of Spain, Pedro Sanchez, has traveled this Sunday for the third time since the volcanic crisis began to La Palma to announce a plan of helps, for a total value of 206 million of euros.

These grants will be approved by decree law in the Council of Ministers to be held tomorrow and are designed to ensure households, business, plantations e infrastructures, as well as to alleviate the problem of supply of Water on the island and intervene in matters of job, farming O sightseeing.

The water supply has become a major problem in the area south of the intersection of the colada, as it has destroyed the supply networks.

As an immediate solution, tomorrow two will arrive on La Palma portable desalination plants acquired by the Government of the Canary Islands while from the Peninsula part a tanker with a capacity of 30,000 cubic meters of water.

The use of Kamov helicopters to transport water from reservoirs to agricultural areas, many of them cut off by the presence of lava.

Magmatic material has rendered useless 30.7 kilometers of roads, so the administrations are also looking for urgent solutions for the areas that have been cut off.

The affected area continues to grow

The area affected by the volcanic eruption has already increased to 399 hectares – 52.5 hectares more than yesterday – and with the fear that it will continue to grow, since this volcanic process has not lost power since its beginning after 3:00 p.m. Sunday, September 19.

The head of Seismology of the National Geographic Institute, Carmen Lopez, has explained that it is an eruptive process in which there are alternations of phases strombolian (more explosive) and effusive (more fluid lava flows).

The volcano has several issuing centers inside the crater and two in the northwest, from which a lava emerges that has melted into a single secondary flow that runs parallel to the one that goes to the sea.

However, these casts are continuously monitored for any change in their progress.

The gas emission They gave a start this Sunday when they had to quickly evacuate teams of scientists and security devices who were working in an area close to the eruption, when an alteration was found in one of the parameters that are measured to determine air quality. However, those responsible for PEVOLCA they insist that air quality is good on the rest of the island.

The administrations have also staged the unity of action to repair the damage caused by the volcanic eruption and have highlighted the strength of the palm tree population to overcome other difficulties in its history.