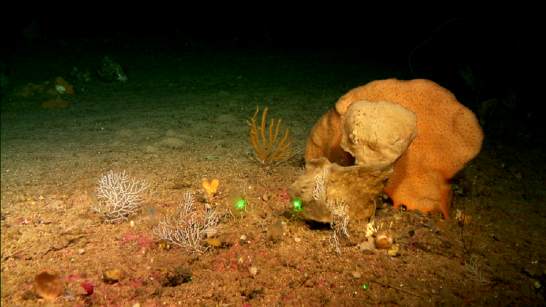 The seamounts of the Mallorca canal they are home to a great richness and diversity of habitats and species of community interest. This is how the Spanish Institute of Oceanography (IEO), throughout the oceanographic research campaigns carried out in the project LIFE INTERMARES, coordinated by the Biodiversity Foundation of the Ministry for the Ecological Transition and the Demographic Challenge (MITECO).

In addition, the research contributes four new records of sponges in the Mediterranean, whose presence was not known until now in this area, as well as other records that show the value of the seamounts of the Mallorca canal as a refuge for biodiversity in this sea.

In fact, the first results of the project LIFE INTEMARES in this area, published in 2019 in the Journal of the Marine Biological Association of the United Kingdom, also reported the finding of another species: Ophiomyces grandis.

In this case, it was a ofiura (echinoderm similar in appearance to the starfish), whose presence in the Mediterranean was unknown until then and is very abundant in the seamounts of the channel of Mallorca.

These results are part of a doctoral thesis, which is developed within the LIFE INTEMARES project, co-financed by the Government of the Balearic Islands and the European Social Fund.

These seamounts have been identified habitats of community interest included in the Habitat Directive, which guarantee the maintenance of a favorable conservation status

In addition to sheltering fields and gardens of a great diversity of sponges, these seamounts have been identified habitats of community interest included in the Habitat Directive, which guarantee the maintenance of a favorable state of conservation of the designated places.

It is the case of Maërl funds, Formed by rodolitos O calcareous red algae on the tops of the Ausias March and Emile Baudot mountains, they are probably the deepest in the western Mediterranean.

Fields of pockmarks widespread and numerous around the three mountains and coral bottoms, not only on the rocky outcrops on the slopes of the mountains, but also on the adjacent sedimentary bottoms, where the bamboo coral (Isidella elongata).

In addition, fossil bioconstructions of ostreidos, which form a reef around the three seamounts, between 200 and 400 meters deep.

The information obtained contributes to improving the scientific knowledge of the underwater mountainss of the Mallorca canal and its bathyal backgrounds adjacent, and will serve as a basis to study a possible declaration of this space as Place of Community Importance (LIC) within the Red Natura 2000.