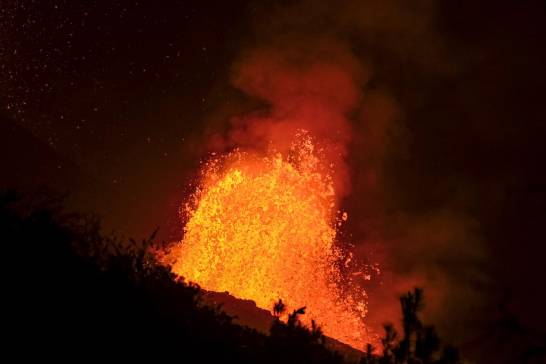 The lava is about to enter the municipality of Tazacorte, after the volcano resumed its activity at about 7:00 p.m. local time yesterday.

The emission of lava is much greater than that emitted over the past week, but above all much more fluid.

One of the mouths of the volcano emits lava at high temperature and very fluid, which could reach the sea

There are currently two active mouths: one in the main cone of the volcano and another below it, which emits lava at high temperature and very fluid, which could reach the sea above the two previous flows. According Involcan, the lava from this new, more fluid river is from Hawaiian type.

Less than a kilometer from the coast

The wash has met the obstacle of the mountain of Todoque and it begins to pass it on one of its sides, while the previous castings are almost stopped.

The southern stream maintains a low speed, but the northern stream, which is more active, is less than a kilometer from the coast

According to updated information from the Department of Homeland Security (DSN), the extension of the surface affected by the advance of lava continues to increase and moves in two flows: that of the South, which maintains a low speed; and that of the North, more active, which is located in the Todoque mountain area, at a distance of between 800 and 1,000 meters from the coast of Tazacorte.

Given this evolution and on a preventive basis, the areas of San Borondón, Marina Alta, Marina Baja and La Condesa have been confined since last Sunday.

At the moment, according to EFE, the eruption of the volcano is not negatively influencing the air quality.

In areas affected by intense ashfall, it is recommended that islanders stay indoors.

In areas affected by a severe fall in ashes, it is recommended to stay indoors, a measure that joins the recommendation to maintain an exclusion radius of 2.5 km around the emission centers to minimize the risk of impact from pyroclasts and exposure to gases.

The island’s airport is operational, although no company operated flights yesterday.