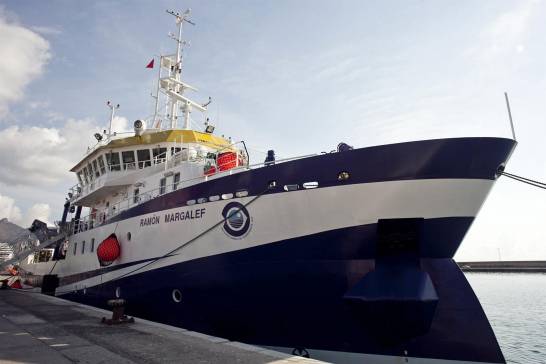 The research vessel ‘Ramón Margalef’ of the Spanish Institute of Oceanography (IEO) is now traveling to the island of La Palma, with the aim of reinforcing the research teams working in the area and adding their teams to the study of the impact of the lava flow reaching the sea.

The ship, which has interrupted a research campaign on anchovy that was being carried out in the Cantabrian Sea, will foreseeably arrive in the area next Saturday, and some of the largest are traveling aboard the ship. specialists in marine geology of the country, according to EFE.

In previous campaigns of the ship, the researchers obtained important information on the underwater area where the lavas from Cumbre Vieja de La Palma are expected to begin to be deposited.

The same ship has already carried out several research campaigns in the Canary archipelago after the 2011 underwater eruption off the southern coast of El Hierro, and had inspected and accumulated important information from the underwater area where it is expected that the lavas from the Cumbre Vieja de La Palma.

The scientist will join the research work of the ship ‘Ramón Margalef’ Eugenio Fraile, of the IEO and that has been participating for days in the Scientific Committee of the Special Plan for Civil Protection and Attention to Emergencies due to Volcanic Risk (PEVOLCA).

IEO researchers will focus their work on the study of the arrival of lava flow into the sea, and for this they will carry out a study of the batimetría ─sea depth study─ with high resolution and will carry out physicochemical analysis of sea water to compare them with the parameters studied during the previous years in the same area.

Will also perform biological analysis to determine the impact of the arrival of the wash to the sea and will study the rocks that contact it.

Scientific work, crucial in the face of this emergency

In addition to the IEO ship, the Higher Council for Scientific Research (CSIC) has joined several teams to study the eruption of the volcano after the seismic swarm of the last days.

Scientific work, has highlighted the CSIC, is crucial to provide an early response to the situation through civil protection plan.

The CSIC teams that have been deployed in the area belong to the Geological and Mining Institute of Spain (IGME-CSIC), to the Institute of Natural Products and Agrobiology (IPNA-CSIC) and the Spanish Institute of Oceanography (IEO-CSIC).

All the tasks carried out by the researchers are aimed at advising PEVOLCA on the evolution of the eruption.

Its researchers, the CSIC has reported, carry out chemical analysis work, measurement of gases and eruptive samples, aerial surveillance, and calculate the impact of the volcano on island biodiversity and on the arrival of the wash into the sea.

All the tasks carried out by the researchers have the objective of informing PEVOLCA about the evolution of the eruption and, in collaboration with colleagues from various research centers on the peninsula, possible scenarios are proposed based on data obtained in the field, in order to add up all the knowledge obtained to try to give the best possible advice during the emergency.