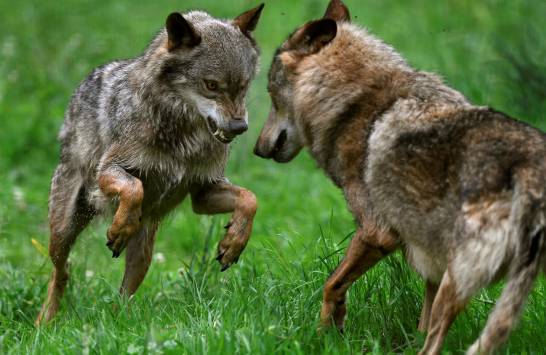 The wolf is no longer a hunting species

Since February of this year, the Government had announced the preparation of the procedures to include all Iberian wolf populations in the List of Wild Species in Special Protection Regime (THE PRE).

Thus, this Tuesday, the State official newsletter (BOE) has published an Order that establishes that this canid is no longer a hunting species and becomes part of the LESPRE, which implies that its hunting is forbidden.

This order establishes two additional provisions: one of them refers to the capture of specimens, set prior to the entry into force of this order, may continue to be applied if it has the consent of the autonomous authorities.

All Iberian wolf populations become part of the LESPRE, which implies that their hunting is prohibited

For this, it is necessary, among other issues, that there is no other satisfactory solution, as indicated in the catalog of measures for the protection of livestock against events of predation of the wolf published by the Ministry for the Ecological Transition and the Demographic Challenge (Myth).

Likewise, it must be justified that the measure of capture of specimens does not negatively affect the status of conservation favorable of the species and the existence of significant damage to livestock in the affected farms, according to EFE.

The second provision adds that the strategy for the conservation and management of the wolf in Spain will be approved by the Sectorial Environment Conference, before December 31, 2021, and will be published on the Miteco website.

The ministerial order has the support of the Scientific Committee, which understands that the stagnation of the Iberian wolf population in recent years and the freezing of its range ─ despite the existence of suitable habitats for its development beyond the northwest peninsular─, has occurred as a consequence of the high unnatural mortality rate that supports the species.

Environmentalists celebrate the protection of the wolf

Various environmental organizations have successfully accepted the Government Order, since they consider it an advance for the conservation of this animal and for the balance of ecosystems.

For the coordinator of the Alianza Verde party, Juantxo López de Uralde, the protection of the wolf is “magnificent news that we have been waiting for years” and has indicated that his party will ensure that the administrations guarantee said protection and have sufficient resources to promote Extense livestock farming and their coexistence with the species.

For its part, Ecologists in Action explains that the government order comes after “years of complaints, studies, demonstrations, reports and legal proceedings” with which they have demanded the protection of the wolf. In addition, they demand measures that promote the coexistence of the wolf and livestock such as the persecution of the illegal hunting and they demand that it “stop feeding the social conflict” between the wolf and the cattle ranchers.

The anger of the livestock sector

Agricultural organizations Asaja, COAG and UPA They have accused the Government of condemning livestock to extinction by including the Iberian wolf in the LESPRE.

The inclusion of the wolf in the list of protected species It has fallen like “a jug of cold water” on the cattle ranchers ─the representative organizations have highlighted─, which have regretted the Government’s decision “despite the many meetings, the intense dialogues, the multiple arguments and the total opposition of the communities with the presence of a wolf “.

The ranchers have called for the resignation of the Minister for the Ecological Transition and the Demographic Challenge, Teresa RiberaThey consider that their department has made a “biased and ideological decision, based on the falsehood that the wolf is threatened in Spain.”

“It is a measure taken from the offices and not from the towns. Anyone who lives in rural areas and lives with the wolf knows that the best management is not total protection,” they have pointed out.

In his opinion, the armor of the wolf is an “attack on livestock and indigenous breeds of the Iberian Peninsula”, as they foresee an increase in attacks on livestock, losses and depopulation.

The inclusion of canids that live north of the Duero in the list allows not only their death is sanctioned, but also its trade or exchange, capture and offer for the purpose of sale or exchange or unauthorized naturalization, according to EFE.

Inclusion in the LESPRE allows not only his death to be sanctioned, but also his trade and capture, among others

Ecologists in Action recalls that with the entry into force of the Government Order “the persecution of the wolf becomes a criminal offense” in the Penal Code punishable by “imprisonment from six months to two years or a fine of eight to 24 months” as well as with the disqualification two to four years of hunting or fishing rights.

In the imposition of these sanctions, the adequacy with the seriousness of the fact is kept, taking into account criteria such as the magnitude of the risk posed by the offending conduct and its repercussion; the amount, if any, of the damages caused; its significance with regard to the safety of the people or property protected by this law or the degree of appreciable intentionality.

Scientific Committee, which understands that the stagnation of the Iberian wolf population in recent years and the freezing of its range ─ despite the existence of suitable habitats for its development beyond the northwest of the peninsula─, has occurred as a consequence of the high unnatural mortality rate that supports the species.