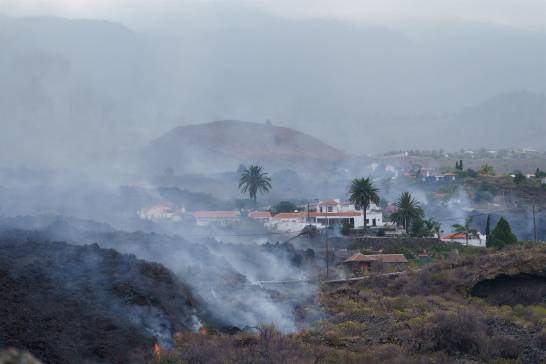 The surface affected by lava flows that flow since Sunday from the new volcano of La Palma now amounts to 153 hectares of land, according to the calculation made by the Canary Islands Volcanological Institute from the satellite images of the program Copernicus, reports EFE.

The latest map provided by this European emergency monitoring program shows the situation at 8.14 am yesterday, September 21.

The great thicknesses of the lava wall, up to 12 meters at some points, could cause in steeper areas the formation of large fragments that can detach from the front

The steering committee of the Canary Islands Special Protection Plan against Volcanic Risk (Pevolca) last night estimated at 185 the damaged properties or destroyed by runoff, of which 65 were homes.

Until now, 5,700 people have been evacuated of the areas closest to the eruption, which began on Sunday at 3:13 p.m. in the area known as Cabeza de Vaca, in El Paso, as well as the lands exposed to the descent of the slopes down the slope.

The great thicknesses of the lava wall that advances towards the sea in La Palma, up to 12 meters at some points, they could cause in steeper areas the formation of large laundry fragments that can detach from the front and reach greater distances.

Furthermore, these front collapses lava can lead to small pyroclastic flows, as indicated in a note by the Volcanic Emergency Plan of the Canary Islands (Pevolca) through EFE.

The lava flow advances at a speed of 200 meters per hour, and the deformation of the ground reaches 28 centimeters

The scientific committee that advises the crisis cabinet specifies that the lava is advancing at a speed of 200 meters per hour and that the deformation of the soil in the area close to the eruption of the volcano amounts to 28 centimeters.

Currently the supply of irrigation water is conditioned to the fact that the water pipe of the irrigation system is not affected. The Guirres and work is being done on the design of alternative pipelines, authorizing irrigation actions in nearby areas but not yet affected by the eruption, adds Pevolca.

The report of the scientific committee indicates that the eruption continues to show the same fissure eruptive style, with a strombolian mechanism, in a fissure in a northwest-southeast direction. The activity is currently concentrated in four eruptive centers -Bocas- main, the last of which opened last Monday at 7:56 pm (local time).

This new center shows effusive activity and emission of lava flows parallel to the previous flows and is very close to the other assets.

The value given in previous estimates that the volcanic gases emitted can reach the 3,000 meters Tall.

The activity is currently concentrated in four eruptive centers, the last of which opened last Monday at 7:56 p.m.

The current estimate of the emission rate of sulfur dioxide (SO2) into the atmosphere by this eruptive process is between 8.000 and 10,600 tons daily.

Experts indicate that the volcanic tremor signal shows a tendency to decrease in amplitude at seismic stations, probably due to the concentration of strombolian activity in a smaller number of centers.

Likewise, it is found that deformations have decreased its speed, showing a “relative stability” in the last twelve hours. The deformation measured by technique INSAR shows an average cumulative maximum of 28 centimeters.

Regarding the meteorological conditions, in the last hours there has been a change of address of the flow in the lower-middle levels of the troposphere, around 3,000 meters, rotating from west to north / northeast component, causing a plume displacement to him southwest of the emission source.

On the west slope affected by the eruption, a regime of breezes with intensities between 10 and 20 kilometers per hour is expected and in the upper levels, winds from the northeast prevail. It is ruled out that it occurs acid rain for the next 24 hours.

The scientific committee notes that work on modeling numeric extension of lava flows and the monitoring of the speed of advance of the castings and their extension.

Taking of samples of ash and lava regularly and conducting field inspections and observations using drones.

A total of 743 personnel Security and emergencies make up the device of the different administrations that work in shifts on the volcanic eruption on La Palma.