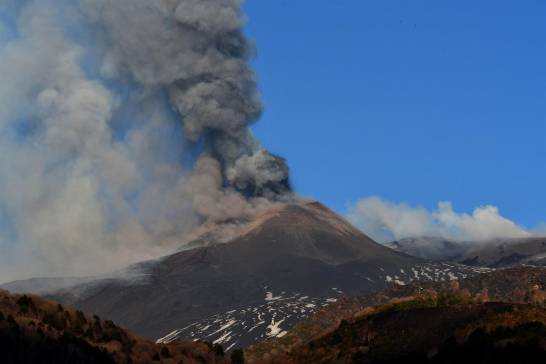 The volcano Etna, on the Italian island of Sicily, has today experienced a new eruption in its southeast crater, with emission of ash and lava, while the amplitude of volcanic tremors is increasing, according to the Italian National Institute of Geophysics and Volcanology (INGV) through EFE.

Volcanic activity began around 6:15 local hours with an ash emission and, 40 minutes later, the resumption of strombolian activity was observed in the southeast crater, the most active in the last eruptions of the Etna.

The eruptive cloud produced by the current activity has reached a height of 9 kilometers, being visible from the localities of Catania and Taormina. According to the forecasting model, the cloud dissipates in an east-northeast direction.

In addition, the INGV has confirmed the existence of a lava source in progress, with a modest overflow from the southeast crater that heads towards the southwest.

Meanwhile, “the increase in the mean amplitude of the volcanic tremors, with a tendency to continue increasing, whose beginning coincided with the beginning of infrasonic activity “, explained the INGV in a note.

The center of the source of the tremor is in the southeastern crater area at an elevation of approximately 2,900 to 3,000 meters above sea level. Although the INGV has issued an alert for the flight, at the moment the current activity of the volcano does not affect to the operation of the international airport of Catania.

As reported by the Institute on August 10, the latest eruptions in the southeast crater have led Etna to increase its altitude by 33 meters, and now its new summit is at 3,357 meters above sea level.

Layers of lava and pyroclastic material expelled in frequent eruptions have accumulated in the southeastern crater cone, the youngest and most active, and they have been transforming their morphology since February 16, when the first episode of 2021 took place.

Since 1980, the northeast crater was considered the highest of the Sicilian volcano, at 3,324 meters, which reached a maximum height of 3,350 meters in 1981, before its edges eroded.