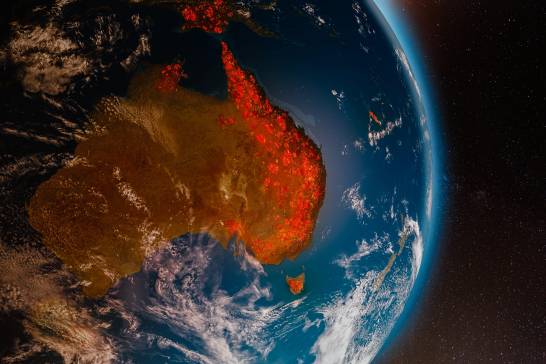 Ash from wildfires in Australia fertilized the Pacific Ocean

Between October 2019 and February 2020, the fire burned in Australia like never seen before. More than 18 million hectares, twice the area of ​​Portugal, were devastated in the forests of the southeast of the country in an unprecedented fire season with strong ecological impacts, including the loss of biodiversity and habitats, as well as a harmful increase in the air pollution. The “megafires” emitted huge clouds of smoke and ash that contained particles of burned biomass, called aerosols, small enough to be transported in the air.

Pushed by the prevailing westerly winds, plumes of smoke and ash carrying these particles traveled east across New Zealand, the Pacific Ocean and beyond Chile. In a process known as deposition, the same process that makes our cars dirty when dust from the Sahara reaches Europe, the aerosols fell on land and sea thousands of miles from Australia.

Now, an international study co-directed by a scientific team from the Barcelona Supercomputing Center-Centro Nacional de Supercomputación (BSC) and Duke University (USA) shows that aerosols deposited in the Pacific Ocean They caused a widespread increase in microscopic marine algae called phytoplankton. In other words, the particles emitted by wildfires fertilized the ocean, similar to when nutrients are added to agricultural land to increase production. In a ocean region considered a marine desert Due to its low concentration of phytoplankton, the answer was equivalent to turning the entire Sahara desert into a grassland for at least four months.

The plumes of smoke and ash that carried these particles traveled east across New Zealand, the Pacific Ocean and beyond Chile.

“In the studio we combine very different techniques such as satellite data, atmospheric models, autonomous marine robots and aerosol sampling to demonstrate that the response of the phytoplankton was mainly due to the amount of iron contained in the aerosols emitted by the fires ”, he explains Joan Llort, a researcher at the BSC Department of Earth Sciences and co-lead author of the study, which has been published in Nature.

“We incorporate the reanalysis of the CAMS global model (developed by the Copernicus program of the European Union for observation and monitoring of the Earth) to obtain a broader view of the spread of the smoke and ash cloud “, he adds Sara Basart, a researcher in the Department of Earth Sciences of the BSC and collaborator in this study.

This research is the first to verify a large-scale response of marine life to the addition of iron from fires. “Our study convincingly shows the impact of forest fires on marine ecosystems, as our observations show that iron in aerosols from fires can have a strong fertilizing effect in some regions of the ocean,” says Llort.

Microscopic algae are crucial for ocean life, being at the base of the sea food chain, but also for the climate, since they absorb large amounts of CO2 from the atmosphere during the photosynthesis process. How the addition of iron and other nutrients to seawater can influence phytoplankton and thus the Earth’s climate is an active field of research to which the BSC is contributing.

Microscopic algae are crucial for ocean life, being at the base of the sea food chain, but also for the climate, as they absorb large amounts of CO2

“We know that climate change is reducing the entry of nutrients in large marine areas, which can ultimately reduce ocean life and its ability to absorb CO2. Therefore, discovering and understanding a new nutrient source for phytoplankton is important to get a more accurate idea about how much CO2 it will remain in the atmosphere for decades to come ”, says the BSC researcher.

The relationship between aerosols emitted by fire and seaweed build-up demonstrated in the study is especially relevant given the intense activity of fires around the world in recent years, especially in regions such as the Amazon, Australia, California and the Arctic. However, better models and observations are needed to quantify CO.2 absorbed by this additional phytoplankton activity.

“Observing extraordinary events like the Australian fires helps us understand the relationship between the components of the Earth and the climate, not only in the present but also in the past and, more importantly, in the future”, Llort concludes.